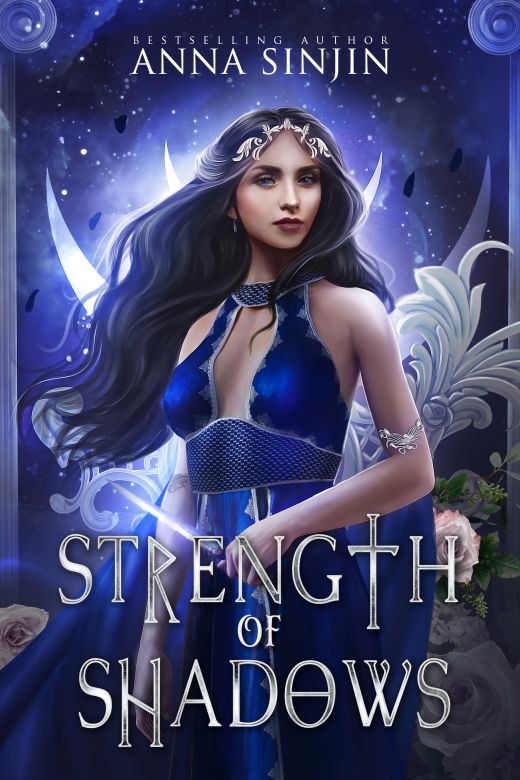 Independence. Strength. Vengeance.
That is the power of the Erinyes.

When the grotesque deities offer Sophy a chance at true freedom, she seizes the opportunity. All she must do to join their ranks is fulfill Hecate’s demands. But the goddess of witches wants the impossible, including the blood of a certain goddess of love. To make matters worse, Hera has called in the favor Sophy promised her and the demand isn’t an easy one.

The Fates seem colluded against her. Danger builds with each new turn. With only her faithful Shadow to aid her, will Sophy be able to find her way to strength and power? Or will she succumb to the games of the gods?

“Frustrated, little one?” someone croaked to her left.

Sophy’s head shot up. The being who had spoken was shrouded in black robes of mourning and hid its face within the folds. Having grown used to the musical notes of the gods, the harsh voice grated on her ears.

She stopped and stared, her heart quickening its pace. The stench of rot assaulted her nose. Instinct told her to turn and run, but curiosity prickled her nerves. Though she had explored parts of the Underworld before, she had always stayed in Hades’ palace and had never seen any other beings. As far as she was aware, she was still in the palace, though perhaps nearing its walls.

“There is much in the world to frustrate one,” Sophy admitted, skirting the being’s question.

“Some more than others,” it agreed.

“What frustrates you?” another asked from her right.

Sophy jerked in surprise and took a step back. She hadn’t seen a second creature. “Many things,” she found herself saying. Her curiosity had quieted, leaving only her desire to escape.

“Maybe we can help,” the second thing murmured.

“Who are you?” Sophy asked.

“We are conveyors of justice,” a third spoke behind her.

Sophy wheeled around, her pulse hammering in her ears.

“We help those in need.”

“Those who have had wrong done to them.”

“Those who are seeking revenge.”

Sophy spun in a circle as each of the beings spoke in turn. Her voice quavered as she questioned, “Revenge for what?”

“Crimes against the gods.”

“All crimes against the natural order of the world.”

Sophy gazed upon this last who had spoken. It was different from the other three. It neither hid nor wore the black robes of mourning as the others did. It seemed to be a woman, and the ugliest creature Sophy had yet seen. She wore a knee-length hunter’s tunic. Two snakes were coiled around her waist, their heads traveling up over her chest to drape around her neck and shoulders as if to hiss in her ears. More snakes coiled around her arms, their heads resting on the back of her hands. Her skin was the chalky white of decay and blood from her red-rimmed eyes dripped down her cheeks.

Mouth gone dry, Sophy tried to swallow her fear. It took three attempts before her voice obeyed her.

“What do they call you?” she asked in a hoarse whisper.

“The Erinyes,” the ugly woman replied.

“That is your name?”

“That is what we are. We have no names. We are only the Erinyes.”

“Why have I never seen you before today?” Sophy probed.

“We have not desired it.”

“And you desire it now?”

The woman cocked her head to the side, her dark, matted hair falling across her neck. One of the snakes flicked its tongue out and slithered away from it.

“You will be leaving us soon. The bright goddess will go aboveground, and you will move on. Where will you go, little one? How will you survive?”

Sophy raised an eyebrow in an attempt at fake bravado, but the tremble in her voice betrayed her. “What does it matter to you where I go or how I survive?”

There was a rough cackle that ended in a wheeze as the thing’s shoulders shook. Sophy realized it was laughing.

“It doesn’t,” the Erinya said with a smile. Her teeth had been sharpened to points and were black with rot. Sophy steeled her body against a shudder of revulsion.

She made to turn around, but one of the other Erinya blocked her retreat. It no longer hid her face, and Sophy could see she was identical in decay and ugliness to the other.

“We know your plight,” the creature commented, her hands raised as if to touch her.

Sophy shrank away from the clawed fingers.

“We would help you,” another Erinya spoke.

“Much has been done that requires justice.”

They all repeated the word, hissing like the snakes that wound around them.

“Justice has been done,” Sophy argued. “Leuco is dead, as is my father.”

More dry cackling echoed around her.

“So true. But death does not stop our justice.”

“It is the beginning.”

“For all of eternity.”

As they spoke, their words became softer yet no more difficult to hear. Sophy glanced around and saw they had crept closer to her. She tried to breathe through her mouth but still gagged on their stench. Turning, she spoke to the one wearing the hunter’s tunic.

“You have carried out your justice. What more can be done for me then?”

“We can give you strength,” the creature to her right replied.

“Power,” came from her left.

“The chance to be your own person,” the Erinya in front of her finally said.

Sophy stared into the bleeding eyes and felt her own widen at the prospect. Though she suffocated on their fumes, she no longer cared.

“What kind of power?” she breathed.

Its cracked lips spread into a wide smile, fresh slits appearing in the dried skin. “Our power,” the thing whispered. “The power to exact vengeance.”

The dry whispers came from all around her.

“Those who have killed and tortured others.”

A vision of herself as a dark goddess of vengeance and justice sprang up before her mind’s eye. She could help others, others who had been treated as she had. She could make evil people pay for their crimes. Those like her father, her brother. With the help of the Erinyes, she would be able to stand alone. She would have the power to live her life the way she wanted, wherever she wanted. She would answer to no one. And no one would dare treat her like a toy to be used and thrown away at will. Even a god.

“We are the Erinyes,” they hissed in her ears. She stared at the blood seeping from the eyes in front of her and thought of the independence they were offering.