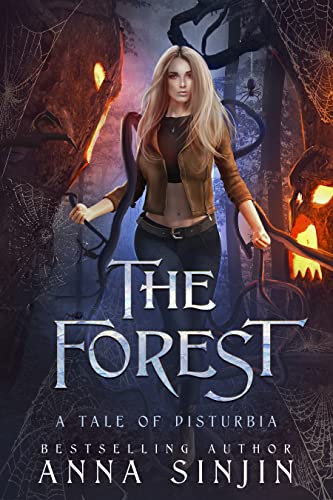 AFTER DARK, THE FOREST COMES ALIVE...


When Vee asked her sister for a favor, Crystal had no idea what she was getting herself into.

The people of Disturbia knew never to venture past the danger signs in the woods. Stories circulated like campfire tales about creatures made of shadows. Creatures that stalked the forest after dark and preyed upon those unwise or unfortunate enough to lose themselves amongst the trees.

Crystal had never questioned the truth behind the tales. The forest was full of dangerous secrets, and she had no desire to encounter them. However, in order to help her sister, she may have no choice. But as the night progresses, can she withstand the horrors that lurk hidden within the forest? Or will she fall prey to their ravenous hunger?

The Forest is the second book in the exciting series A Tale of Disturbia. If you like dark twists and turns, menacing werewolves, and bone-chilling monsters, then you'll love this next installment from best-selling author Anna Sinjin.

Get your copy of The Forest today to discover the deadly secrets lurking along Disturbia's borders!

***Each book in this series is a standalone, meaning they can be read in any order without impacting the reader's experience.***
Read more

In the weak, yellow light, Colin could see something on the other side. He stepped closer, swiveling the light around without going through. Four walls and a ceiling were illuminated by the beam, but they looked odd, malformed somehow. Then it hit him. The room itself wasn’t special—it was covered in something. It was covered in… plants. Some kind of vegetation growing in such a dense concentration that it covered the floor and walls.

Colin stared, dumbfounded, at the spectacle. How could plants grow in a dark room, without sunlight or water? Then he noticed something else. He dragged the flashlight’s wobbling beam along the walls, examining them and noting how the plants covered every inch of space. Many had even managed to find purchase in the ceiling and hung, motionless. He moved the flashlight’s beam to the opening.

Why was there an opening when the plants covered everything else, even going so far as to hang from the ceiling? Even the entrance to the ruins had been obscured by hanging vines and plants. Why not this one?

Colin remained there, hesitating. The urge to explore further had disappeared the moment he spied the room. Whatever it was had been pulling him here, wanting him to find this place, this room. But why? And what was it?

He almost debated leaving. He knew he wanted to enter the room, though, to study the plants. Just the thought of what he could learn from them made his heart pick up speed in excited anticipation. Maybe this was his big discovery. Maybe this was what he needed for the rest of the town to take him seriously. But he also heard the voices of his family telling him to be cautious, not to run headlong into things he didn’t understand.

Colin frowned. They didn’t understand. Their careful mentality was the reason his family had never made any serious contributions to the town. Always content to slide through unnoticed. Never doing anything truly remarkable.

He would change that.

Whatever this was, whatever he had found—this would make people listen to him and notice him.

He stepped through the doorway to peer at the green life on the walls. They consisted mainly of ropelike vines with a multitude of leaves sprouting from delicate-looking offshoots. He reached out to finger the leaves and found them to be soft, smooth, and pliant. Gently pulling one of them didn’t cause a rip or breakage. Instead, the leaf and stalk bent with the pressure and, when released, bounced back into place.

The vines were of varying thicknesses. Some were as wide around as his thigh, while others were as narrow as his pinky. He tried to trace one vine back to its origin but lost it in the profusion of its tangled brothers. Stepping with care, he studied the floor. It was chaos. Try as he might, he couldn’t detect where any plant might have started its growth.

Shrugging, he took off his pack and placed it on the thick, uneven carpet of plant life. Colin knelt beside it, putting his walking stick down and rummaging around in his bag.

The sensation of being watched crept over him once more. He stopped, looking up and scanning his flashlight across the room and into the tunnel. The feeling lessened when he saw nothing, but it didn’t go away.

I’m alone in unknown ruins, and it’s dark, he silently reasoned, shrugging it off. Of course I would get spooked.

The memory that the sun shone outside made him feel a modicum of relief and safety. He would get his cuttings and get out. Colin returned to his task and found several containers which could house the plants. The problem now was that he wasn’t sure what part of the plant he should take. Ordinarily, he would go for the roots, but that didn’t seem to be an option this time.

After some thought, he decided to take clippings from various parts. He would be able to use them for different things, and if none of them took to the soil and sprouted anew, he could come back and try again. Satisfied with his plan, he set about finding bits to cut off. Colin sliced off a leaf with its stalk and placed it in a container when the feeling of being watched returned in full force.

His flashlight flickered, threatening to plunge him into pure darkness. A spark of anxiety flashed in his gut, and instinct yelled at him to leave. The light blinked out. He stood there, frozen in place, his senses alive with the knowledge that he was not alone.

Paranoia, he tried to tell himself. You feel this way because you can’t see. Primal instincts to help guard us against danger. But there’s nothing here with you. You know that because you saw nothing before.

Logic failed to convince his gut. He instinctively turned his back to the wall and jiggled the flashlight. When that didn’t work, he beat it lightly and then harder against his leg. It flickered into life. He saw a flash of some dark creature before it disappeared. Gasping, Colin collided into the wall behind him and swung the flashlight around, but he couldn’t catch the entity again.

Eyes shone in the darkness to his left. Glowing yellow orbs with slits down the middle hovering in the darkness, staring at him. Colin jerked his light over to them, but the eyes disappeared before he could get more than a glimpse of a black shape. Heart racing, he inched toward the doorway. He didn’t bother to get his stuff. All of that could be replaced.

A presence filled the blackness next to him. While he couldn’t see it, he could feel it and he had to force himself not to flinch or break into a run. He jerked the flashlight to the side to catch a glimpse but saw nothing. He glanced to his other side, hoping to see the outline of where he had come in. The darkness was too complete. Praying he was going in the correct direction, he continued to inch to his right.

When the eyes popped up again on the other side of the room, Colin stopped and waited. He wanted to see what it would do if he didn’t scare whatever it was off with the light. Maybe it meant no harm. Maybe it was as curious a being as he was. The eyes held him in their glow, almost hypnotizing him in the darkness. Then they rushed forward.

Gasping, Colin managed to jerk the flashlight up in time. There was a kind of deafening roar as Colin caught a longer look at a tall, black figure with elongated limbs and fingers that were curved like talons. He couldn’t see the thing’s face because it hid behind its arms. But he didn’t need to. Nor did he want to. Menace poured from the creature in waves before it blinked out of existence.

The sound left Colin’s brain muddled and in pain, but his ears felt fine. Without stopping to wonder about that, he lunged for the doorway, holding the plant container to his chest. He met some kind of resistance this time, though. It was as if the air had thickened and grown dense. He didn’t know what the creatures behind him were, but he knew he needed to get away.

Colin struggled, pushing and panting his way through the doorway. The crazy idea that the ruins didn’t want him to proceed entered his mind, but he banished it. Ruins that had conscious thought and desire? Impossible!

The moment he was through, the pressure of being held back vanished. The release was so sudden that he sprawled to the floor. He didn’t know what might have caused it, nor did he care. Colin rolled onto his back, shining the flashlight here and there in an attempt to catch one of the creatures.

To his horror, his flashlight began to flicker again. He mentally cursed the faulty equipment and wondered why flashlights never worked properly when a person needed one. He scrambled to his feet and sprinted back up the corridor. The light bounced erratically with his movements and soon illuminated an opening.

Running full speed at it almost felt like slamming into a wall. However, instead of bouncing off, he melted into the empty space and had to struggle once more to push his way through. Grunting and panting, he fell through the other side and lay sprawled on the ground.

Three pairs of eyes glowed in the darkness. Gasping, Colin scrambled back, fumbling to point his flashlight at them. The light had died, though. In a panic, he hit it against his legs again, not bothering to be gentle. The creatures separated, creeping closer as he fought with his technology.