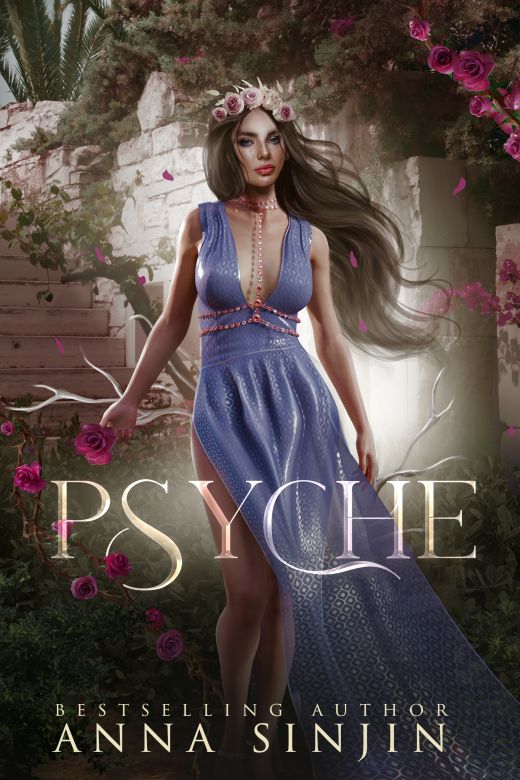 Beauty is only skin deep. But to one vain goddess, it’s everything.

Born with exquisite loveliness that would rival even the gods, Psyche has grown up enjoying the praises and worship of others. But when one zealous suitor oversteps the line and claims she’s more radiant than the goddess Aphrodite, her troubles really begin.

The goddess of love is a conceited, jealous creature and refuses to be upstaged by a mere mortal. She sends her son, Eros, to punish Psyche only to have him succumb to the woman’s charms as well.

Can the two lovers withstand the wrath of a goddess? Does Psyche have the strength to overcome the trials and tribulations Tyche throws at her?

Long ago, when Greece was young and the gods were merely old and not ancient, there was a maiden who was not quite a maiden any longer. Though men said she was more beautiful than Aphrodite, none attempted to claim her hand. No man thought himself worthy of her, so she grew older and despaired of ever being wed.

Those days were different than the present. Girls were considered women years before they are today. Her purpose in life is to marry and serve her husband by taking care of him, keeping his house, and birthing his children. For a woman to remain unmarried in her twenties is to give up all hope of having her creditably established.

Psyche sent a daily prayer to the gods that she would find a husband, but the years passed without change.

“Your eyes are like burnished bronze shields shining in the light of Apollo. I would gaze forever into those orbs and write songs dedicated to their luster. One word from those pomegranate lips would stop my heart forever.”

“Is blood gleaming on those bronze shields?” Psyche wondered in secret. Knowing better, she kept her thoughts to herself. “Will I go to battle as a warrior maiden to Athena or a huntress dedicated to Artemis? Is Death the only man brave enough to take me for a wife?”

Outwardly, she remained composed and attentive. The man before her could hardly have been deemed a man, so lacking in years as he was. Although he aspired to the title of poet, his words lacked the romance with which he thought to woo her. She smiled at him and acted the dewy-eyed maiden she knew he expected to see but no hope did she place in him. He’d never go to her father to ask for her hand. His only intention was to berate her ears with his amateurish and clumsy flattery.

“How proudly he will strut later in the telling,” Psyche thought to herself in contempt. “The effervescent Psyche deigned to see him and allowed him to pay homage to her. How he will glory in his role of the lovelorn fool for his friends.”

With no visible sign did Psyche show her feelings. Though a sneer begged to curl her lips, she instead cast down her eyes so he could not read the mind behind them. The boy continued his incessant accolade.

“Aphrodite herself could not hope to compare with the grace and ethereal beauty that the gods saw fit to present you at your birthing. Those who lay their worship at her door are fools when there is a more worthy goddess living in their midst. You indulge us, undeserving as we are, by gracing our eyes with your majesty.”

“You should not say such things,” Psyche interrupted him, more sharply than she intended. Real alarm lanced through her. She cast a glance around them as she always did when people blasphemed against Aphrodite. “I am a mortal who will wither and die. My looks are fleeting and will serve in the end as food for worms. The goddess is everlasting. Her light will never dim.”

The boy who would be a man smiled with an eager gleam. The moment had come to prove his devotion! This goddess on earth would know his undying love and loyalty.

“Your modesty increases your beauty as nothing else could,” he pressed. “The goddess is proud and cruel. She refuses to allow us even a glimpse of the edge of her garment. But you! You give us your eyes to gaze into, your hair to smell. Your skin to touch!”

He took her hand in a burst of impetuosity. His palms were soft and moist. There was no strength there. A scholar’s hands. According to her married sisters, his father was a scholar and wanted his son to follow in his footsteps. But this boy was a fool and would never attain the wisdom of a true learned man.

When he realized he was touching his goddess, he wet his trembling lips with his tongue. Psyche recognized the look that sprang to his eyes. His breath came faster as his awkward fingers caressed the back of her hand. She stood, pulling her arm away as she did so, and walked a few steps from him before turning back around.

“Sir, it is not proper,” she protested in a gentle voice, her eyes cast down and away as was expected of her. “If you would speak to my father…”

She let the sentence die away unfinished, knowing he wouldn’t act on the suggestion. He was not yet a man to look for a wife, and she would no longer waste her time catering to his infantile delusions.

He stood, his body awkward with his sudden luck at having touched her bare skin. Psyche noticed the bulge under his tunic a moment before he did. Once more, she averted her eyes, determined not to look at him again. He had the grace to blush at least. Clasping his hands in front of him and hunching over to hide his disgrace, he pretended to give the requisite bow and save the shreds of his dignity.

She murmured the appropriate farewell, bowed, and waited as he rushed from her family’s courtyard. Her mother joined her moments later. She suspected the matron had been watching the exchange in secret. Sighing, she dropped back onto the stone seat she had lately vacated and propped her elbow on her knee to rest her chin in her hand.

“Oh, Mother!” Psyche exclaimed. “Is my case so desperate that I should entertain boys who cannot control themselves?”

Her mother placed a soothing hand on her back, her own chest heaving with a quiet sigh as well.

“Psyche, my daughter, you are nearing your twenty-second year with no breath of a proposal to your father. We must consider any prospect that presents itself, even if it be a misshapen boy who pleases himself in front of you every day.”

“Mother!” Psyche sat up in shock.

That matron shrugged and squeezed her daughter’s shoulder.

“Your sisters were married before they had reached their eighteenth year. Your youth is leaving you, my daughter. Do you wish to be given to the gods as a priestess? Never to know the joys of having your own children and home?”

“Then you must accept whatever man approaches your father, even if he approaches him on behalf of his illegitimate or senile son. We have given you too much freedom if you believe you have a say in the matter.”

A pang spasmed in Psyche’s chest. She always knew she should succumb to the will of her father when the time came, but to be chastised about it gave her a moment’s pain. Psyche had hoped her father would love her enough to take her own opinion into account. If he had, it seemed that time was passing with her growing age. In desperation, she gestured in the direction of the boy who had shamed her with his lack of control.

“How can a boy such as that take care of me as a husband? I would end up being as a mother to him!”

“As all wives are to their men. You cannot deny that he has at least displayed himself able to father your children.”

“Or able to try,” Psyche grumbled and resumed her slouch.

Her mother continued as if she hadn’t heard the interruption. “All else means nothing, for his father is a man, even if this boy should not be. His father would make sure you did not go without money.” She pulled Psyche up so her posture was straight once more. “I know I sound harsh, my dear, but you really have no choice.”

Psyche looked up at her, a frown creasing her brow.

“What is it, Mother? You did not speak of my prospects yesterday. What has changed?”

“Your father’s mind,” her mother confessed as she sat on the stone seat across from her daughter. “He spoke to me this morning. If no one offers for you by the time you reach your twenty-second year, he will offer you up to the temple as a priestess.”

“Would you rather bear the shame of living out your days as an unwanted woman? A burden to her father’s household and a stain on his name? At least there is honor and duty as a priestess. You would be wed to the gods in a sense. And think of the freedom you would be granted! Much more than what you and I have here at home. Married women have the joys of caring for their families, but they do not have the privileges of the priestesses. And your father is kind enough to allow you your choice in which god you would prefer to serve. I believe it would be best if you chose Aphrodite’s temple given your beauty. I have no doubt she would be pleased to have more people flock to her. Surely you will not deny that your presence there would attract more men to her worship. What goddess would refuse such an offering as that?”

“And if the men come to place their worship at my feet instead of hers? What then?”

“Then they are fools, and she will curse them.”

Psyche sighed and moved to sit on the ground at her mother’s feet so she could rest her head on the woman’s knees.

“I feel she has cursed me in their place,” she admitted with a wet sniff. “My sisters are both plain yet they had no trouble gaining husbands. I have three times their beauty, but the men who approach me have all been filled with hot air and words. What have I done to anger Aphrodite so that she would deny me love?”

Tears made silent trails down her rose-tipped cheeks. Her mother stroked the coppery ringlets that fell, full and shining, from the cluster on the back of her head.

“We can only continue to pray and make offerings to the goddess,” she advised and lifted her daughter’s head to look into her eyes. She wiped the tears from those young cheeks and smiled. “Perhaps she desires your beauty for her service. Or maybe she is saving you for a greater man than can be found here. We mustn’t lose hope.”

Psyche sniffed back her tears as her mother kissed her forehead. She conjured up a brave smile and nodded, though she couldn’t find hope in her heart.