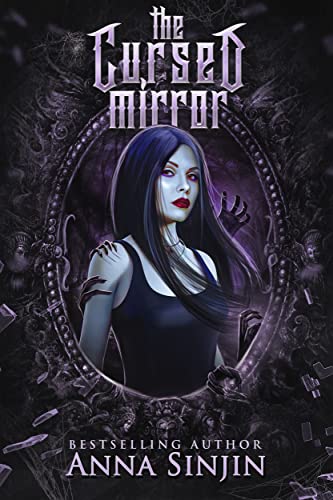 Anna Sinjin
Follow
When you gaze into a mirror, do you ever stop to wonder what might be gazing back?
Genres: Horror
Buy now
Available in:
Keywords: paranormaldemonsnovelette

When you gaze into a mirror, do you ever stop to wonder what might be gazing back?

At first, when her husband finds the antique mirror at a garage sale, Julie can't believe her luck. But as time passes and she starts to see strange things in the reflection, she begins to wonder. Does the mirror hold more than its glassy surface reveals? Can she trust her eyes, or is she descending into madness?

The Cursed Mirror is a standalone horror novelette from best-selling author Anna Sinjin. If you like supernatural thrills, dark and foreboding shivers, and demonic entities, then you’ll love this spine-tingling paranormal tale.

Polishing the mirror’s frame took longer than Seth had anticipated, but Julie didn't balk at the work. If they could redo the floors on their own, she could polish some metal. Every day for a week she came home from work to scrub at the bronze finish. It was a rich, dark hue, though it turned out to be brighter than Seth had originally supposed. He had also thought it wasn’t ornate, but Julie’s definition of ornate was quickly differing from his as she polished the nooks and crannies.

Julie was pleased with the end result, and Seth was satisfied he had made the right decision in buying it. They set it near a wall in the living room. The room was sparsely furnished, but with the large mirror taking up a good chunk, it felt almost full. They stood in front of it in the same way they had when Seth had first brought it home.

Julie rolled her eyes at him. “A small price.”

“So says the junkie who’s been getting high off fumes for a whole week,” he replied and chuckled as she elbowed him in the ribs. “Come on, I made dinner—some Polish dogs in honor of your polishing.” Except he pronounced it as “Polish-ing.” Julie groaned and rolled her eyes again, but he dodged her light smack.

“Your jokes are awful,” she complained.

“You know you love me,” he called back as he headed into the kitchen. Julie followed.

“Love only goes so far, and your jokes push the limit.” Her indulgent smile belied her words when he leaned down to give her a kiss.

The next morning, when Julie was admiring her new mirror before leaving for work, she noticed the dark splotches along the top of the glass. She had seen them earlier while cleaning and polishing the frame, but something about them had changed, and she couldn’t pinpoint what was different. Were there more of them? Shrugging, she redirected her attention to her full travel mug of coffee and took a scalding drink as she headed out the door.

The next morning, movement from the corner of her eye caught her attention, and she glanced up. She snorted when she saw she was standing in front of the mirror. It had merely been her reflection moving. Shaking her head and chuckling at herself, she went back to getting ready for work. There was another glimpse of movement in the mirror, but she ignored it and headed out the door.

That afternoon when she got home, she followed her usual routine of instantly shedding her clothes and taking a shower. While there, she had a thought—maybe she would lounge around in the nude to greet and treat Seth when he returned. She padded out into the living room clad in air and reveling in the thoughts of her husband’s reaction. Would anyone outside catch a glimpse through the open door? Julie giggled.

Something moved in her peripheral vision. She looked over but saw nothing except the mirror. A small frown creased her forehead, and a prickle of unease crawled in her belly. She glanced around the room and saw a tissue waving in the draft from the AC.

“Julie!” she swore at herself in exasperation and went over to the mirror. She opened her mouth to berate her reflection for being an idiot and saw a handprint on the glass. “Seth,” she grumbled under her breath. Who puts his palm flat against a mirror? Other than a child.

Her first instinct was to get the glass cleaner, but she paused and moved around to better see the handprint. It was too small to be Seth’s hand, and the fingers tapered at the end. She looked down at her own hands. Had she touched the glass without realizing it? No, her fingers weren’t tapered. Staring at the print, she noticed the fingers were longer than usual and she couldn’t see any of the whorls and lines that a normal handprint would have.

That can’t be right, she thought and reached to touch the print. Movement in the mirror caught her attention and stopped her hand inches from the surface. She stared for a long moment, searching the room behind her, but saw nothing out of the ordinary.

Suddenly, she felt her nudity and shivered. Julie swallowed as she stepped back a pace and continued to watch the reflection of the room. Nothing happened, but she couldn’t shake the feeling of vulnerability and hurried back to the bedroom for some concealing pajamas.