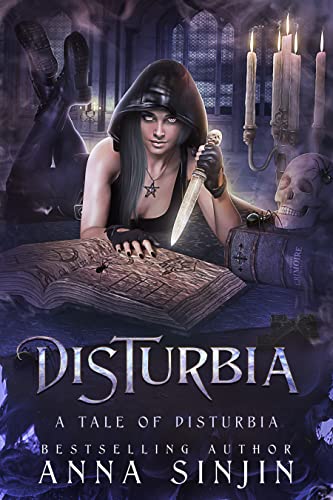 Anna Sinjin
Follow
What do you do when the monsters are real?
Genres: Dark FantasyParanormalOccult & SupernaturalHorror
Buy now
Available in:
Keywords: magicdemonssurvivalparanormal mysteryoccultzombie

What do you do when you can't trust your senses? When your logic fails you? When the monsters turn out to be real?

When Lucy and Rich get lost and run out of gas, they expect the worst. Their luck changes, however, when a friendly driver gives them a lift to the nearest town and they're able to check in to the local B&B for the night. But has their luck changed for the better? Or has it gotten worse?

They're warned against going out after dark. Lucy can't shake the feeling of being watched. And then Rich disappears during the night. Nothing is as it seems.

Will Lucy be able to find her friend and make it out of the town alive? Or will they both become permanent residents of Disturbia?

Disturbia is the first book in the creepy series A Tale of Disturbia. If you like the dark and spooky, deadly witches, and ravenous zombies then you'll love this book from best-selling author Anna Sinjin.

Get your copy of Disturbia today to discover what mysteries the town holds!

***Each book in this series is a standalone, meaning they can be read in any order without impacting the reader's experience.***

The woman in question sniffed and rubbed her aching head. “Where is here?” she asked, her voice rough. She winced as she spoke. It felt as if someone had rubbed her throat with sandpaper until the skin was raw. A memory of her screaming in terror flashed through her mind. She stiffened and thrust it aside, shifting uncomfortably in her chair.

“You’re in Ashwell Asylum,” the doctor responded, watching her. His voice was calm, soothing, and matched the patience and kindness he exuded.

Dr. Ashwell nodded in agreement. “Of course you’re not. Officer Cooper brought you in yesterday. You were unconscious. He said you had passed out, that you had undergone some kind of trauma. We’re the closest hospital at hand, and he believed you might need… our expertise when you woke.”

“Are you a psychiatrist then?” she asked.

Dr. Ashwell nodded once more. “I am. Oftentimes, people who suffer from severe stress or trauma need someone to talk to about it. Someone who understands, who will listen without judgment.” He held his hands out to the side with a self-deprecating half-smile. “That’s part of my job. I’ve heard many things, and most of it isn’t ‘crazy’.” He flashed finger quotations as he spoke and continued. “The people I meet in my line of work are more often confused and in need of a listening ear and an open mind. I don’t judge what I hear. I try to understand and help them get through whatever difficult time or event they’re experiencing.”

Lucy nodded, hesitating. Was he telling the truth? Something about him made her want to trust him. She wondered if it was his youth and good looks or his gentle demeanor. He was unlike any doctor she had met before. They had all been old and busy, unwilling to sit and listen because they had a dozen more patients to get through that day and they were already behind schedule.

Dr. Ashwell had dark brown hair, bordering on black, and gentle blue eyes behind rectangular glasses perched on his nose. Lucy kept getting distracted by the long, thick lashes outlining those eyes. His voice was smooth and hypnotic, seeming to lull her into complacency. She found herself staring at his thick, sensual lips. If it wasn’t for his eyes, mouth, and voice, his slighter build and pale skin would’ve clearly marked him as a bookworm.

Isn’t he a little young to be a doctor? she thought and closed her eyes to refocus her thoughts. The face of a beaten and bloody corpse appeared in her mind. Shuddering, she opened her eyes again.

“Are you ready to tell me what happened?” Dr. Ashwell asked.

“No, I need to talk to the cops. I need to tell them what happened first. There’s a killer on the loose.”

“There will be time for all that,” he assured her. “The police are waiting for me to get your story. When you and I are done here, I’ll give them the report, if you’ll allow me to, and they’ll be able to take appropriate action.”

Dr. Ashwell opened a file and placed it on the desk. He glanced through it before speaking again.

“According to the statement provided by the officers who brought you in earlier, you were found in an abandoned house over on Highway 5 about an hour’s drive outside of Everett. A phone call was made from…”

“Yeah, I called the cops,” Lucy interrupted. “But the house wasn’t abandoned and it wasn’t along the highway. I was in Disturbia.”

Dr. Ashwell frowned slightly. “Did you say Disturbia?” he asked.

Lucy nodded, pushing her hair back from her face. “Yeah. And that’s where the cops need to get back to. Vivienne is there and she’s…”

“But there is no town with that name,” Dr. Ashwell interrupted softly but firmly.

Lucy stopped, staring at him before shaking her head in confusion. “Of course there is. I was there. I mean, we didn’t know about it before we got there, but they said that’s what the town was called. It’s not huge or anything, but it’s big enough. I’m sure I could find it on a map for you.”

Dr. Ashwell paused, jotted something down on a pad of paper, and smiled encouragement at her. “Okay, let’s start from the beginning, shall we? One step at a time so I can understand.”

Lucy took a deep breath and tried to curb her impatience. The sooner I tell him what happened, the sooner this will all be over.

“My boyfriend and I were trying to get to Fairfield, but we took a wrong turn after Everett and got lost…”