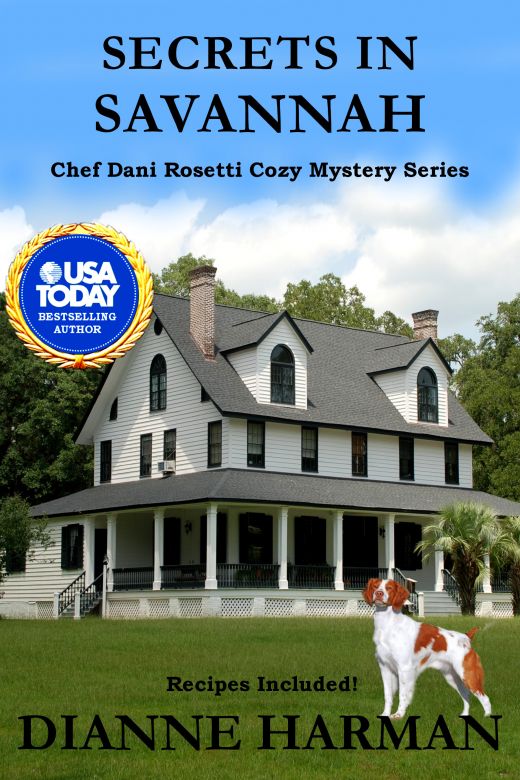 What could be better than being hired to cater a champagne celebration in Savannah, Georgia in honor of the 150th anniversary of the Daughters of the Confederacy? Well, maybe it’s not such a good thing if your life is threatened.

The Daughters were an exclusive group of women who owned Historic Registry homes in Savannah, plantations outside of town, and wielded a huge amount of influence over Savannah, and even the whole state of Georgia. But Dani Rosetti never expected to have her life threatened because she was a symbol of change that some of those women did not want.

But were they ready to do whatever they had to do in order to preserve the status quo of their community? Did that involve doing something harmful to Dani, because she wasn’t one of their preferred Savannah caterers?
When Dani started receiving root bundles and mojo bags, her niece’s nanny, Briana, became concerned. Was Dani in danger? And according to Dr. Henry, a man who had spent his life working with the white magic and black magic of that region of the United States, she definitely was.

But what was the motive, and who was responsible? Arthur, Dani’s sous-chef and bodyguard, tries to make sense of it, but Dani thinks it is absolutely ridiculous, probably nothing more than an old wives’ tale. Whether or not she believes in it, Arthur is convinced the danger is real. Then Cosette, the Daughter who hired Dani for the event, starts to receive root bundles and mojo bags.

Anna, Dani’s niece, is her usual precocious self and quickly learns what “Bless you” really means in the South. Join Dani, Arthur, and Anna as they become involved in the light and dark side of what is commonly referred to as the “Hostess City of the South,” the mysterious and oh-so-beautiful city of Savannah, Georgia.

This is the 6th book in the Chef Dani Rosetti Cozy Mystery Series by a USA Today Bestselling Author.


What is Cosette thinking? the woman wondered as she reread the heavy cream-colored invitation that had been hand-delivered by Cosette’s driver, Jimmy B. She still couldn’t believe what she was seeing. The invitation read:

She set the invitation down and sat back, wondering how she should handle this. There was no RSVP on the invitation because Cosette knew the women always attended the DOC meetings, and this celebration was the date of a regular meeting, which each woman carefully entered into her appointment calendar at the beginning of each year. Nothing would ever be more important than a meeting of the Daughters of the Confederacy.

What really galled her was that Cosette was bringing in an outsider to cater the celebration. Everyone knows that the three best caterers in the world are right here in Savannah, and no one, ever, ever, hired someone else to do the catering, particularly someone who wasn’t even from Savannah. It was simply unthinkable that Cosette was doing something like this.

And how would this Dani woman even know what to serve at a Savannah Champagne Celebration? And where had Cosette gotten her name from? This was like heresy in a church, only worse, because the Daughters of the Confederacy was the most influential and important group of women in Savannah. Nothing of importance that pertained to the city took place in Savannah without their approval.

Even the politicians came to kiss their ring before announcing their candidacies. It was well-known in the state of Georgia that if a prospective candidate wanted to run for any political office in the state, they’d better start first with the Daughters of the Confederacy. If the Daughters gave their approval, the person would probably win whatever race they were planning to enter.

But if they didn’t get their approval, even if the prospective candidate’s base was in Charleston or Atlanta, they could forget about running, because very simply the six women who made up the existing Daughters of the Confederacy pretty much ruled everything in the state, although no one had the courage to say that publicly. Even the governor of the state checked with them on some issues that he felt might be controversial.

Then there was the matter of things relating to the city of Savannah, such as new construction, preservation of historic homes, and continuing to maintain the status quo. It was well-known that south and west of the city housing tracts had been built and even malls, but no new buildings ever were built in the Historic District of Savannah.

That was the bailiwick of the Daughters, as many a prospective developer had found out over the years, much to their chagrin. Unlike other cities where bribes and back-scratching were commonplace, that simply didn’t happen in Savannah. There were rigid rules when it came to maintaining things, and the Daughters had taken it upon themselves to make sure those rules were followed.

And no Daughter would ever stoop to shop at a mall. The Daughters had their seamstresses come to their homes in Savannah or to their plantations, and had been doing so for as many years as the Daughters had been around. The only exception to that was a trip to Miss Lily’s Boutique to see the latest fashions in her shop, because she regularly traveled to Europe and brought them back. Miss Lily’s family was almost as well known as the Daughters, but ever since Lily’s father had sold the family plantation to pay off his gambling debts, so she’d become, more or less, the seamstress to the Daughters.

Everyone knew that with the present ages of the individual members of the Daughters, their days of being the most influential group in the city and beyond were coming to an end. Even though it was talked about among people desperate for a change in the city, no one had the courage to express it to one of the members. Thus, their power continued.

She didn’t watch much television, just a few of her special shows, and she thought that this Dani Rosetti might be on the internet, maybe that’s where Cosette had heard of her. She walked into her study, sat down at her computer, and googled the name “Dani Rosetti.”

She spent several hours reading everything she could about Dani, and when she was finished, she sat back, clearly in shock. It was bad enough that the Dani woman wasn’t from Savannah, or even from the South, but she was a television celebrity. All she could think about was how tawdry this was, and what an affront it was to the Daughters.

Even though Dani had been to college and then studied law before she went to the Cordon Bleu in Paris, she’d obviously never been in a sorority or it would have been listed. And everyone in the South knew that being in a top sorority was a door opener for the rest of a woman’s life. Actually, if a woman didn’t have a relative who had been important in the Confederacy, they had to rely on the sorority they’d joined in college if they wanted to be at all involved in Savannah society. And they all did.

Of course, it went without saying that if you really wanted to make something of your life, or be in Savannah society, then you must have attended the University of Georgia. There were a few other colleges that were acceptable, but a Northern college, never. And one of the articles had said that this Dani woman had studied law at a university in Boston.

So now they were going to have some classless television person prepare the food for the most important meeting they had ever had. She stood up and began to pace the room, thinking that it was time for a little Southern retaliation.
She rang a small bell and an aging woman with skin the color of café latte came into the room almost instantly. She wore a black skirt and blouse covered with a white pinafore.

“I want you to arrange for a hex on Cosette Stuart and a woman by the name of Dani Rosetti on October 20th. Get it from the best root doctor you can find, and I would suggest Dr. Mercer. Here’s some money for it. What I want is something arranged so that both of the women are sick on October 20th. That shouldn’t be too hard, and return whatever money is left over.”

“I’ll take care of it,” the woman said softly as she backed out of the room, just as every other black woman who had worked in that house had done for the last 150 years.

She sat back, satisfied with how things were going to turn out. Cosette and this Dani would become ill. And even if Cosette insisted on having the celebration, she wouldn’t enjoy it at all. The food may have been prepared, but the chef wouldn’t be able to serve it or do anything but probably lie in bed, as sick as she and Cosette were going to be.

I’ve wanted to do something to Cosette for a long time. She always thought she was just a little better than the rest of us because her family lines were very pure, unlike the rest of us. We’re still from the most important families in Savannah, but over the years there have been a few things we’ve had to cover up. And all of us in the Daughters know about them, but we never talk about them. After all, we wouldn’t be where we are today unless we were very, very discreet.

Yes, October 20th may very well be the best day of my life.