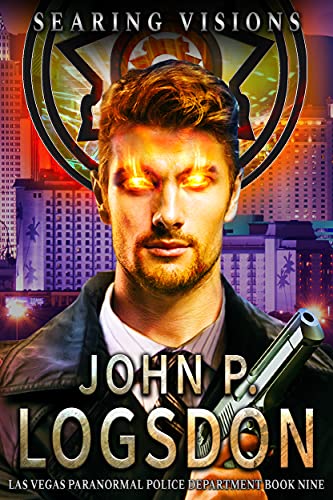 The Admiral is in a coma, Vegas is under Wynn's thumb, and Ian is in Hell...literally.
Ian Dex had no choice but to escape. Fighting against one uber is tough enough, but an army of them is impossible.

That means he needs to build an army of his own. Where better to find one than in Hell?

But Ian's got a personal issue to deal with first. The Boner of Destiny has been trying to possess The Admiral, which would cause all sorts of issues. To protect himself, The Admiral has gone into hibernation, leaving Ian to figure out a way to get rid of the Boner of Destiny on his own. The only way to do that is to meet with the queen of the satyrs, and that's definitely not something Ian finds appealing.

Members of the PPD have to travel topside, scouring the city from the shadows. Too bad they're being watched from multiple angles.

With Wynn growing in power, Ian dealing with a possession, and the crew of the PPD scanning topside, it's only a matter of time before the concoction of mayhem explodes.

If Ian Dex and the crew of the PPD want to get Vegas back under control, they must steel themselves long enough to bring war...

This is one of the naughtiest Ian Dex books to date, and if you're an avid reader of the series you know that's really saying something...

THOUSANDS OF READERS HAVE FOUND A HOME WITH THE PARANORMAL POLICE DEPARTMENT. YOU CAN JOIN THE FUN, TOO. JUST SCROLL TO THE TOP AND BUY YOUR COPY TODAY!
Read more