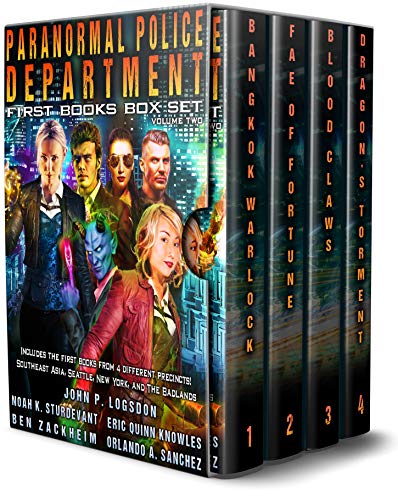 The Paranormal Police Department (PPD) is a collection of Urban Fantasy adventures, spanning 8 precincts from all around the world (and the Netherworld!). They have delighted thousands of readers with action, adventure, outrageous comedy, and tons of snark. Grab your badge and join the legion of fans who keep begging for more!

Book 1 from the Southeast Asia PPD: Bangkok Warlock
Mark Vedis is an average cop. Average for a mage in the Paranormal Police Department (PPD), anyway. After years of doing the jobs nobody else wanted, his career, and life, seemed to be on hold.

Then he met a foul-mouthed demon who filled him with power, turned him into a warlock, and dumped him into a world of wealth and debauchery that is disturbing at best.

Book 1 from the Seattle PPD: Fae of Fortune
Savannah Sage is a half fae/half mage hybrid, which means she has plenty to prove to the prejudiced idiots at the Seattle Paranormal Police Department.

To make matters worse, she gets placed in charge of the department’s rejects. If nothing else, she at least has a murderous pink teddy bear to fight by her side.

Book 1 from the New York PPD: Blood Claws
Bethany Black is a rookie cop in the New York Paranormal Police Department (PPD). She's fast as hell, tougher than nails, and she's got no problem with blowing up stuff.

Book 1 from the Badlands PPD: Dragon's Torment
Welcome to the Badlands Paranormal Police Department, where Chief Ezekias ‘Zeke’ Phoenix—a dragon who believes rules are meant to be followed—has accepted his new post.

His job is simple: keep the fragile peace between dragons, hellions, and the denizens of hell. The rules in Infernal City are even simpler: mind your business, watch your back, shoot first, and don’t bother asking questions.