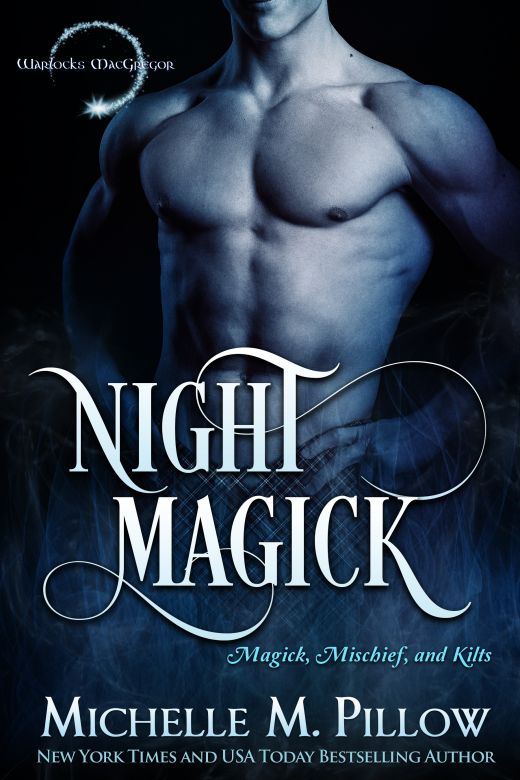 Maura MacGregor might by new to the secretly magickal town of Green Vallis, but this isn't her first dance with the devil. See what fate has in store for her!

Content advisory: Warning: Contains yummy, hot, mischievous MacGregors who are almost certainly up to no good on their quest to find true love. And Uncle Raibeart.

Maura MacGregor held very still under the steady gazes of the three naked gorgons. They dominated the room and made it impossible to look anywhere else. One of the scaly women was extremely beautiful, and the others, eh… not so much. Forked tongues poked through sharpened teeth. They had snakes for hair and a stare that could turn a human into stone.

If only she were human and not a warlock.

And if only the gorgons were real and not painted on her motel wall because being turned to stone at the moment would be better than being subjected to the rantings of an angry motel guest.

She plastered a smile on her face and turned to the family. They had prepaid for a week in what had been her most expensive suite. The mother gripped her hands tight over the eyes of her children. Considering they were teenage boys, the scene would have been comical if not for the fact she’d promised them the best stay in town during each of the woman’s six confirmation calls.

Maura said the only thing she could think of, “Damn vandals.”

Though, vandals couldn’t account for the snakes carved to wind around the headboard and dresser. Luckily, those details didn’t draw focus quite like the painting.

Janet Butler backed out of the motel room slowly, stepping onto the outside sidewalk. They were a late check in, and there wasn’t anywhere else in town for them to go. The woman herded her teenagers toward the parking lot as she checked up and down the walkway like she feared for their lives.

“Walter,” the woman commanded in a shrill voice. “Walter, come on, let’s get out of here.”

Walter sighed, and the corner of his lip twitched ever so slightly as he glanced at the full-frontal nudes on wall. Maura got the impression that the man didn’t get much say in his marriage.

Walter’s shoulders slumped a little, and his head hung forward as he moved out the door.

“Tell her we are expecting a full refund,” the wife yelled.

“And we’re going to leave a bad review online,” the woman continued. “Walter? Did you tell her?”

Walter peeked at Maura and then through the door at the naked ladies. “I think she heard you, Janet.”

“I have other rooms,” Maura offered. “I’d be happy to give ya a deep discount for the inconvenience.”

The inconvenience of having to step six feet to the left to another door, she added silently.

Somedays she didn’t know why she bothered.

“What did she say? I can’t understand a thing that comes out of her mouth.” Janet had understood her just fine on each of the demanding phone calls, but suddenly Maura’s Scottish accent was an issue?

“She said they have other rooms.” Walter didn’t try to sell his wife on the idea.

“You expect us to stay in a high crime…?” The flustered woman’s words trailed off as she pushed her boys toward the parking lot. “Get in the car, boys. Hurry.”

Maura slowly pulled the motel room door closed and gestured her hand at the painting, calling forth her magick to remove it from her wall. Yellow sparks hit the paint and made a strange crackling noise before dissipating. The painting remained.

At the panicked sound, Maura turned in time to see her uncle, Raibeart, streaking across the motel parking lot. The teenagers laughed. One lifted his phone, and Maura gave a tiny wave of her fingers to make him drop it before he could hit record.

“I’m nae Walter. The name’s MacGregor, love, Raibeart MacGregor,” Raibeart yelled. He gave the shocked woman a jaunty wave as he turned the corner to run along the exterior hall enclosure toward more rooms. Her uncle’s late-night runs were getting a little too frequent. And definitely too public.

Walter dutifully got into the car as his wife worked herself into further hysterics. Several doors were open, and other guests watched the show. Frowning, Maura waited for the Butlers to pull out of the motel parking lot before making her way down the long sidewalk toward the front lobby. She smiled at the guests as if there had not just been a frenzied woman screeching at her.

She wasn’t too worried about the review. After some time, she could have her cousin Euann take it down for her. He had a way with computers. Though to be fair to Mrs. Butler, there had been a naked painting on the wall, and she was not given what she’d been promised.

Maura peered at the motel sign that read “Hotel Motel” in bright letters to confirm the vacancy light was still showing. ...