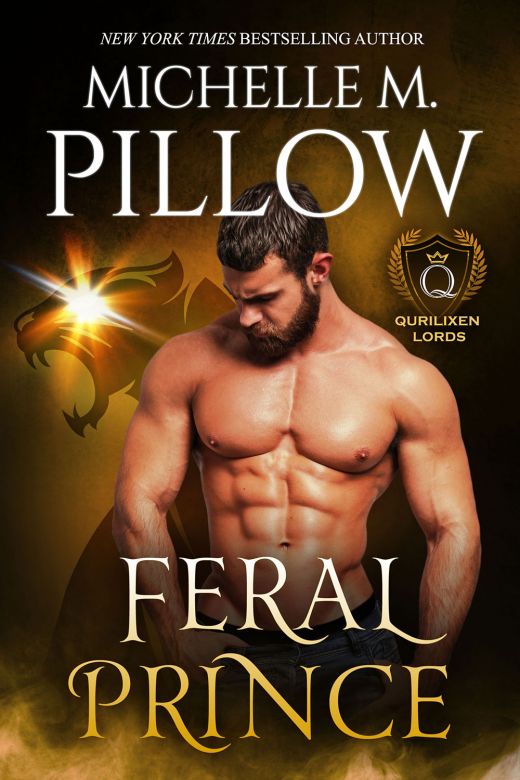 Prince Roderic hates the diplomacy demanded of his position as a cat-shifter royal. As the son of a diplomat, he’s all too familiar with the treaty surrounding the Federation military occupation, Shelter City. The shifters can’t simply ask them to leave, or they’d risk retaliation. Discretion is the key, which includes not getting caught mingling with those under Federation protection. So crossing paths with the beautiful Justina is a mistake waiting to happen. She’s frustrating and rash and doesn’t mind drawing attention to herself. But, as fate would have it, she’s also the one woman he wants to call his own.

For decades they have dealt with lies and deceit, but when the humanoid population under the Federation’s control begins hunting shifters out of desperation, he knows things have gone too far. It’s time to drive the Federation off his planet once and for all, even if that means losing his one chance at true love.

The metallic smell of blood permeated the forest, the scent unmistakable against the darker tones of earth and trees. It filled Roderic’s nostrils and drove him from a deep sleep onto all fours. Already shifted into cougar form, his senses were heightened. He stood alert, ready to fight as he focused on his surroundings.

Roderic missed the forest of his childhood. Things seemed more straightforward in youth, or perhaps he’d been fiercer and ready to take on the universes.

Roderic thought of the Federation’s presence. No, it had been simpler. Now everything was complicated.

The forest smelled like blood, enough to wake him but thankfully not a bloodbath. Not shifter blood. Humanoid? Cysgod?

Roderic had fallen asleep away from the Var palace where he lived but near the Federation Military’s stronghold of Shelter City. By agreement, the Federation had a right to occupy the valley. Some shifters would say that decision was the single worst in Qurilixian history. But what else could they do? A virus had wiped out nearly all of the Cysgodian population and destroyed their homeworld. They needed a place to recover, and Qurilixen’s unique atmosphere aided in promoting health. Scientists said it had to do with the radiation from their three suns, particularly the one blue sun unique to their planet. They determined the virus caused no threat to shifters, and at the time, they were the Cysgods’ only hope of survival. What else could they do? Turn away hundreds in need?

And it worked. The visitors survived.

Over thirty years had passed, and they continued to survive.

Sure, the virus hadn’t killed the new residents since their arrival, but the poverty and neglect might. And there was nothing the shifters could (legally) do about it.

The dilapidated city was a blight to the planet of Qurilixen and an embarrassment to the ruling shifter families of Draig and Var. What was supposed to be a temporary shelter for the Cysgodian off-worlders had turned into a standoff between the Federation and Qurilixian people, with the Cysgods stuck in the middle.

When the elders had agreed to partner with the Federation to save the Cysgods, they couldn’t have known the course of events that would unfurl. Before Shelter City, shifters had kept the Federation off their planet, and they’d kept out of the Federation Alliance.

Though the residents weren’t supposed to venture past the city’s borders, some had been caught outside city limits. Roderic didn’t blame them. Families starved, and poverty had become a way of life. It was no wonder they had begun to rebel.

Roderic focused his senses as he tried to track the blood. At least it was faint. That was something. No giant battlefield. No massacre.

His paws hit the soft forest floor as he navigated through the trees. Individual leaves large enough to cover his head created a thick canopy above, and their fallen brethren spread beneath him in a decaying carpet to pad his journey. Some of the trunks had grown as wide as a small spacecraft in this part of the forest. Their bark looked as if it had boiled to the surface to grow in a bubbly texture. The Var left this part of the forest undisturbed. The Federation would gladly cut down all the trees and sell them off-world to the highest bidder. They would strip the land, mine all the ore, and leave desolation in their wake.

Roderic had no proof of these plans, but neither was he an idiot. They’d done it before to other planets. Qurilixen was too far out into the Y quadrant to do much good as a strategic military base in the multiple universes.

He paused, listening to his surroundings. A faint shuffle caught his attention, but he couldn’t distinguish between humanoid footsteps and wildlife.

He took a deep breath. Definitely not shifter blood—so that ruled out the Var marsh farmers or Cysgods hunting shifters. Some in Shelter City had become convinced shifter blood held the key to immortality. Others were just hungry and desperate enough to consider trying shifters in their cat and dragon forms. So far, neither plan had been successful, thank the gods.

The blood could be from Cysgods who failed at hunting shifters. Soft flesh was no match for claws and talons.

Or Cysgods running from the city.

Or human captives escaping Federation imprisonment. Two women had recently been rescued. They were now married to dragon-shifter princes and under Draig protection. Was this another prisoner? Fiora and Salena had a missing triplet sister.

The smell of blood became stronger. Roderic focused on the scent, and all thoughts of the Federation politics melted from his mind as he tracked the source. With the thought of another woman running from danger, his primal instincts took over. Women were meant to be protected.

The same properties that made Qurilixen optimal for health had created a medical anomaly in which most of the shifters were born male. Though more females had been born in his generation than those that came before, it was still only a tiny few compared to the males. Most women came from off-world and tended to be delicate in nature compared to shifters—no fangs or claws to protect themselves. Thus, it became accepted that women needed protection.

Shifter women hated that assessment, as they’d proven themselves as fierce as any man.

Truth be told, most alien women hated that assessment as well—at least all the wives who had married into the royal families.

His head lowered as he stalked through the brush, ready for danger. Every nerve in his body prickled with awareness. Roderic leaped nearly twelve feet to stand on top of a fallen trunk. His claws dug into the bubbly texture of the bark to keep from slipping on the mossy overgrowth. It gave him a better vantage point over his surroundings.

He stopped to listen to the woman’s frantic voice. The tone was soft as if she was aware someone might be listening.

“I told you I can’t be out here.” She sounded vaguely familiar, but it was too difficult to place where he might have heard her. “They’ll notice I’m gone when they send the drones to do the heat counts. But these woods aren’t safe either. I can’t leave you like this.”

Roderic jumped down and took a quiet step, careful where he placed his paws.

“Maybe I can conceal you in the city, but all of my spots are,” she hesitated and grumbled, “not any place you’d want to wake up. And if you don’t wake up, I can’t have a dead body stinking up my best hides. The scanners would detect the smell.”

Roderic took another step, then another. He was close.

“Hey, you, wake up.” A rhythmic slap preluded a light moan.

His heartbeat sped. The animal inside him enjoyed the mystery of the hunt.

Light danced through the canopy above. Roderic focused his shifter vision between two trees to where a woman crouched with her back toward him.