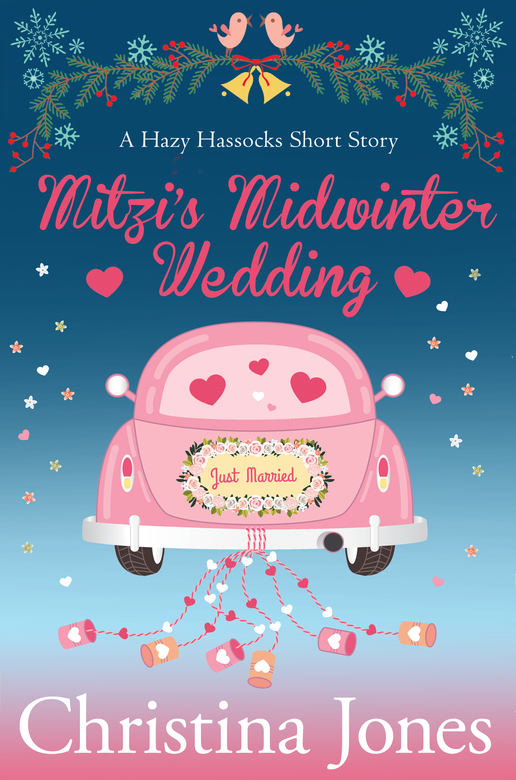 A Hazy Hassocks Winter Story In the cold, dark, and surprisingly snowy days of early December, Mitzi and Joel are planning a secret wedding with minimum fuss in a luxury hotel in the nearby village of Apple Hinton. After sneaking off guiltily one Friday afternoon, disaster strikes when their car breaks down in the middle of nowhere and they're forced to seek shelter in the rural hamlet of Pedlars Puddle, Mischief abounds as the snow gets thicker ? and will Mitzi and Joel even make it to the church on time?

From Little Frumpton to Pedlars Puddle

‘They’ll hate me!’ Mitzi cast an anguished look back over her shoulder at The Pampered Puddy-Tat Luxury Cat Hotel. ‘They’ll think I’ve abandoned them! They’ll never forgive me.’

Joel opened the car door for her. ‘They’ll love every minute of it,’ he said reassuringly, his voice whipped away by the screaming December wind. ‘They’ve got each other and a really superb centrally heated chalet and all their blankets and toys, and they’ll be getting their regular treats and favourite food. And it’s only for a couple of days. Now hop in before we freeze to death.’

‘But – their little faces … Maybe we should go back and –’

‘Mitzi, it’s sub-zero out here. They’ll be fine. Get into the car, please.’

‘Come here,’ Joel hugged her. ‘They’ll be snug as bugs in there. They won’t even know we’ve gone.’ He gently smoothed the tears from her cheeks with his thumb. ‘Come on, hop in before these turn to icicles.’

Mitzi reluctantly hopped. She wiped away the traces of her tears with the back of her hand, snuggling into her seat as Joel got into the car, then squeezed her eyes shut trying to blot out the last sight of Richard and Judy, their silver-grey fur ruffled in disgust, their green eyes glaring at her in disbelief.

Joel leaned across and kissed her, then fastened his seat belt, started the car, and slowly manoeuvred The Pampered Puddy-Tat’s long, winding and exquisitely tree-lined drive. ‘Please don’t worry about them, love. And don’t cry. They’ll be warm as toast in there, which is more than I can say for us if this damn heater doesn’t start to work soon.’

‘Don’t change the subject,’ Mitzi sniffed, opening her eyes and blinking quickly to un-gum her eyelashes. ‘I’ve never left them before. I mean, when we’ve been away they’ve always stayed at home and Doll and Lu, when she lived in Hazy Hassocks, or Flo and Clyde have looked after them, and they’ve hardly noticed we’re not there.’

‘I know, sweetheart. But we had to do the cattery thing this time, didn’t we? Because we don’t want anyone else in Hazy Hassocks to know we’re away. If you’re so determined to keep this weekend secret, then we had no choice.’

‘Oh, I know – but Richard and Judy won’t understand.’

‘No,’ Joel said kindly, finally reaching the end of the extensive drive and peering into the slate-grey murkiness of the winter afternoon, ‘they won’t. Because they’re cats. It doesn’t matter how many times you’ve explained to them, and I’ve heard you so don’t deny it, they won’t understand. But they will have a lovely cossetted time.’

‘Yes, I know, but …’ Mitzi sighed. ‘OK. I’ll try to forget their little heartbroken faces … no, honestly, I’m kidding. I know they’ll be fine. I’m just going to sit back and enjoy being chauffeured through the beautiful Berkshire countryside.’

They drove in comfortable silence for a while, along narrow, winding roads, with sparse hedges bordering bare, fallow fields.

‘Um,’ Mitzi said, ‘the view isn’t actually that inspiring, is it? It’s all a bit samey when you’re miles from anywhere … I wonder if Richard and Judy have had their tea yet … Maybe they won’t eat. Maybe …’