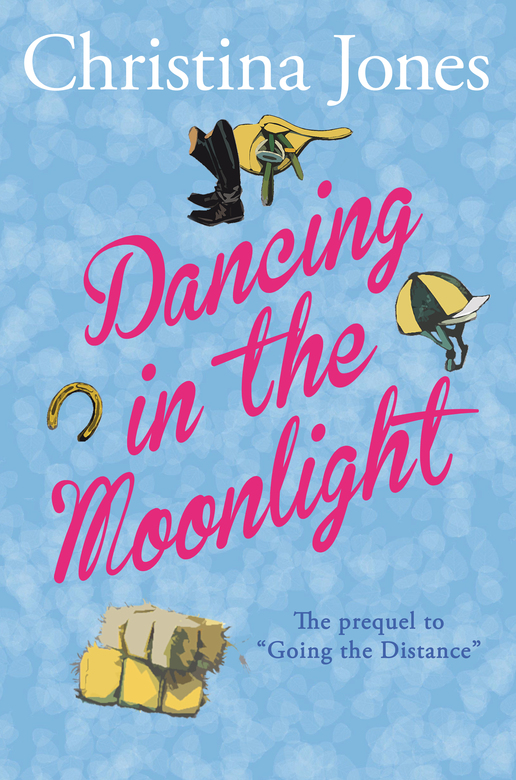 Rosa Brennan loves her job as stable jockey at the Victoriana Grange racing stables in rural Berkshire, where wealthy Jersey-based owner Kit Pedersen keeps his string of top-class horses. But her happiness and the entire future of Victoriana Grange is suddenly thrown into jeopardy by the arrival of the beautiful and arrogant Claudia Rochelle who is determined that Kit should move his horses elsewhere. When Kit and Rosa meet for the first time sparks fly ? but Rosa is determined that Kit mustn?t take his horses away ? while Claudia, sensing a growing attraction between Kit and Rosa ? is equally determined that she will win...

With a groan, she pulled the pillow over her head as the alarm gave a warning click.

‘Go away,’ Rosa mumbled from beneath her pillow. ‘I’m not getting up. I’m never getting up again.’

Ignoring her, the radio purred into life, with the cheerful voice of the disc jockey slicing through the sleepy darkness.

With a sigh, she staggered from her bed and stumbled shivering into the bathroom.

Within half an hour, she had become human. The aroma of strong coffee filled the cottage kitchen, lights glowed warmly, and the central heating hummed its cosy song throughout the tiny rooms. Rosa listened intently to the weather forecast as she tugged on her riding boots and screwed her long, auburn curls into a ponytail.

‘That’s all right, then.’ She spoke aloud to her reflection in the looking glass above the mantelshelf. ‘A fine day after a chilly start, and no rain until this evening. Couldn’t be better. Owen will have sunshine to show the mysterious Mr Pedersen round the stables, and by the time the rain comes, the contracts will be signed, and we’ll be celebrating at Garston Manor.’

She smiled back at herself with happy confidence.

The steady thunder of hooves was sweet music. Rosa felt the power in Corsican’s bunched muscles as, crouched low over his neck, she urged him on, pacing him against the silver streak of Moon Dancer.

This was her life’s blood. It was for this that she fell out of bed grumbling in the small hours of every morning. Without this she would die.

After about half a mile, she wheeled round, watching Moon Dancer and Perry Mitchell stream smoothly away into the dawn. With a wide smile, Rosa turned and walked Corsican towards the gallop rails where Owen Green, his collar pulled up to his ears, lifted his hand in salute.

‘What do you think?’ she enquired, still out of breath. ‘Have we got a champion sprinter on our hands?’

‘Maybe.’ Owen returned her grin. ‘That was some performance. Moon Dancer is a cert for the Derby distance, but it looks as though this one could give the two-year-olds a run for their money.’

As he reached out and fondled Corsican’s quivering chestnut neck, Rosa beamed down at him, sharing in his ill-concealed delight. He was the one of the country’s foremost racehorse trainers, her employer, and her friend.

‘Shall I hack him back to the yard and get ready for second lot?’

Owen’s gaunt face, pale in the early light, lost some of its smile. ‘No, I’d rather you were around when the Pedersen visit took place. You’re my trump card! I really wish he’d indicated when he intended to arrive – in fact, I wish the whole thing was over.’

‘It’ll be fine,’ Rosa placated him, secretly troubled by the strain etched on Owen’s face. ‘There’s no doubt about it. Kit Pedersen will be a sweetie, just like his father. It’ll only be a question of re-signing the contract, doing your best public relations act, and then ladling out the champagne! I’m sure there’ll be no problems at all. I’ll see you back at Victoriana – and don’t worry!’

Owen gave a wry grin as Rosa bunched Corsican’s reins and expertly turned him round. Again she felt a pang of concern. After all, Owen and Jessie Green were the nearest thing to parents that she had. It was all too easy to be glib, and she knew that she, too, wished that Kit Pedersen’s proposed visit was over.

Leaving the gallops, she slowed down on the approach to the road which led to Victoriana Grange, Owen’s training base. She hoped fervently that Kit Pedersen would be as good an owner as his father. The Pedersen string of top-class horses were the stars of Owen’s yard, and James’s death in a road accident two months previously had left their fate hanging in the balance.

Solicitors had written that the estate was in some confusion. For weeks, Owen heard nothing, and then out of the blue, Kit Pedersen had telephoned and announced his intention of arriving to discuss ‘his horses.’ Just that, with no indication of what it might entail. Rosa knew very well that Owen had been worrying himself sick ever since the phone call.

Suddenly, a car came from nowhere. It screamed past Rosa and Corsican in a blur, horn blaring, lights flashing.

Corsican threw himself backwards in panic.

Immediately calmed by her persuasive words, Corsican dropped, quivering, to all fours. Thankfully, Rosa gulped in lungfuls of air, her heart pounding.

‘Idiots!’ she hissed beneath her breath. ‘Damn visitors! Straight off the motorway with no brains! No brains at all!’

Quietly encouraging Corsican forward, she began to make her way slowly along the road to Victoriana Grange. As they rounded a bend, the same blue Mercedes was slewed into the lay-by. Rosa felt a surge of uncharacteristic
anger. Slipping from Corsican’s back, she marched towards the car.

‘Just what on earth did you think you were doing?’ she demanded through the open window. ‘Driving like a maniac when there are horses on the road! Don’t you realise how dangerous it is?’

The driver lowered the road map she had been studying, and turned scathing eyes towards Rosa.

‘Yes, I am!’ Rosa snapped, overcome by the waft of perfume and the sophisticated beauty of the raven-haired girl behind the wheel.

She had olive skin, perfect make-up, and was swathed in a honey-coloured leather coat. Her voice was musical, the accent heavily French. Rosa narrowed her green eyes.

‘Don’t you realise that you could have caused an accident?’

‘Me? I always drive fast. It is your stupid, little English lanes! And there was no accident, was there?’

‘That’s not the point! You should show more respect for –’

‘Respect?’ The girl’s voice lowered. ‘I show respect for those who earn it. Not to stable girls!’

‘Tush!’ The driver indicated a huddled form asleep in the passenger seat. ‘I have no interest in who you are. You lower your voice! He is exhausted.’

The French girl started the engine and began to wind up the electric window.

‘Enough! Do .you know who I am, little stable girl? I am Claudia Rochelle! Excusez-moi!’

With a cat-like roar, the car sprang away.

The spacious, oak-beamed kitchen of Victoriana Grange was full of the aroma of eggs, bacon and mushrooms, as Jessie Green dished up her usual delicious breakfast to the ravenous stable staff.

‘… and then she just roared away!’ Rosa finished, having regaled Angie, Owen’s secretary and her close friend, with the tale of Claudia Rochelle’s reckless driving.

‘Maybe she took the wrong exit from the motorway,’ Angie said, ‘or perhaps she’s one of the guests for the party at Garston Manor. They’re coming from all over the world tonight for … oh!’ Her voice trailed away. Rosa followed Angie’s eyes and grinned. Perry Mitchell had just sauntered into the kitchen, dropping his crash hat in a corner and encompassing everyone with his broad smile. His eyes met Angie’s and the smile increased. The attraction darting between them was almost tangible.

Perry was one of the country’s top jockeys, and his dark good looks had gained him a horde of female admirers. Rosa alone knew just how much he and Angie adored each other.

‘I beat you this morning, Brennan.’ He laughed across at Rosa. ‘Moon Dancer is the best horse I’ve ever ridden. He’ll win the Derby even if the rest of the field has a furlong start! What about Corsican?’

‘Don’t count on it!’ Perry continued. ‘It’s doing me no good at all having mud kicked into my face and my reputation by a mere woman!’

Laughing, Rosa leaned across Angie and punched Perry playfully, then turned away, leaving them to their happy flirting. Working and living in a man’s world, Rosa had had plenty of boyfriends, but as soon as they showed any signs of wanting to deepen the relationship, she froze in panic. It always happened. Maybe it would be nice to love and be loved in return, but she knew she would never allow it to happen to her. ‘Any more coffee going, Jess?’ Owen Green burst into the kitchen. ‘And could you rustle up two more breakfasts, my dear? We have visitors.’

All eyes turned towards the doorway. Rosa’s blood froze. Standing behind Owen, looking extremely bad tempered, were Claudia Rochelle and her sleeping passenger, only now, he was very much awake.