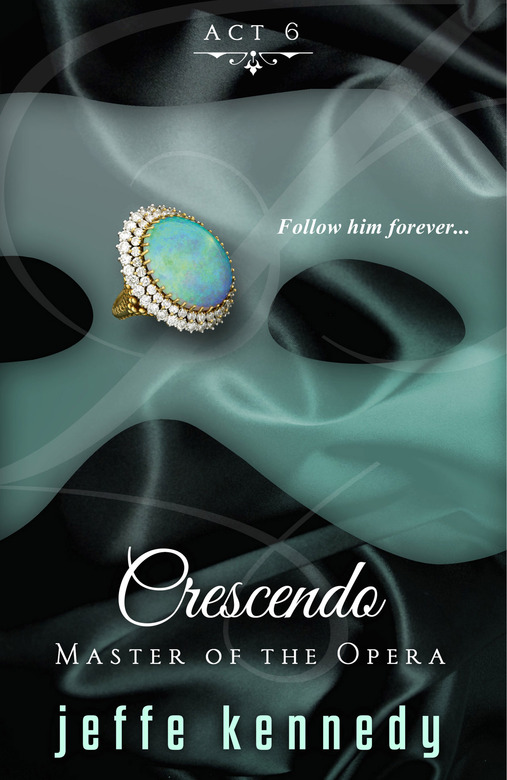 In the sixth and final installment of Jeffe Kennedy's sizzling Master of the Opera, a man and a woman risk everything they've ever loved—for the most dangerous passion they've ever known. . . Caught in a web of secrets and lies, Christy Davis has come under the suspicion of the local police. Since becoming an intern at the Sante Fe Opera House, she has witnessed strange occurences in the underground tunnels. She has heard inexplicable whispers in the shadows after midnight. And she has found the lover of her dreams in the masked man who lives down below. But after the discovery of a dead body and other sinister events, Christy realizes that her life is in danger. Two men hold her fate in their hands: Roman, the opera house's wealthy benefactor who uses his money and power to control her. And the masked maestro known as the Master who demands her surrender and commands her pleasure with each stroke. Both want her; only one can have her. . . In a rising crescendo of madness, obsession, and lust, Christy must take a chance and follow her heart—to a breathtaking climax as powerful as love itself. 15,000 Words

The sound of banging on her front door woke Christine from a dead sleep.

Clad in her purple unicorn pajamas, she checked the time: 7 a.m., so she’d been asleep for four hours. She shoved Star’s raggedy self out of sight under the covers and blearily made her way to the door.

That demanding knock undoubtedly belonged to her father. When she’d awakened him with her phone call, he’d answered with an immediate “What’s wrong?” She rarely caught him off guard, so his uncalculated concern had been exactly the right way for him to respond.

So much so that she’d burst into tears, releasing all the pent-up fear and strain, to her utter shame and embarrassment. Never much for displays of emotion in general, much less on the phone, her father had simply told her to cry herself out and that he was getting on a plane, no matter what she wanted.

She hadn’t even argued.

“No more running,” she muttered to herself, pasting a bright smile on her face and yanking open the door. “Good morning, gentlemen!”

Carlton Davis stood at the top of the narrow stairs, flanked by the two officers who’d been kind enough to pick her up out on the road the previous night and bring her home. They hadn’t asked questions or commented on her tears—except to ask if she needed to go to the hospital, which she’d refused—for which she’d been grateful. They did tell her what time Detective Sanchez expected to meet with her. Fair enough.

“Ms. Davis,” one of the officers cut in, “this man says he’s your father and wants admittance to your apartment. Do you wish to let him in?”

A blood rage suffused her father’s face. It might have made her a small person, but she enjoyed the moment. The Santa Fe cops don’t care who you are, Daddy. She decided to play the protective-custody thing for all it was worth. If she was going to confront her father, she wanted him off balance and both of them on neutral ground. Just because he’d been nice when she’d called the previous night didn’t erase all past history.

“Actually, I would be more comfortable meeting in public. How about the Starbucks on the Plaza in fifteen minutes? I imagine you guys wouldn’t mind getting out of the patrol car and having some caffeine, either.”

“Not acceptable!” Her father tried to push in the door and was astonished when the officers stopped him. “You dare—!” he sputtered.

“We’re doing our best to protect your daughter, sir, and to oversee her status. The department considers her a flight risk. We’d prefer to keep a public eye on her also.” The young Hispanic officer gave her a wink on the side away from her father. “It’s your choice whether to meet with her, but that sounds like your best avenue.”

He didn’t like it but finally agreed. To be sure, Christine bolted her door while she quickly dressed. Her father wasn’t outside, but her ever-present guardians were, standing outside the patrol car, enjoying the warm morning sunshine.

“Thanks guys,” she called out. “Don’t you ever go off shift? You’ve been up all night.”

“We’ll switch off once we escort you to see Sanchez at eleven. Until then, we’re to stick with you.”

She lingered a moment, fiddling with her car keys. They weren’t exactly her friends, but they weren’t the enemy, either. “I don’t suppose you’ve seen any sign of the Sanclaros?”

They exchanged looks. “We couldn’t speak to that, but certain suspicious vehicles did visit this area. They continued on after noting the presence of the patrol unit.” The report sounded formal, coming from the genial cop who’d winked at her—the general facts anyone might read in the public record.

“Make it less than five dollars’ worth and you’re on.”

Her father waited at a table, a coffee and oatmeal in front of him, cellophane packets of fruit and nuts unopened. He glowered when she waved, then drummed his fingers impatiently when she took cups out to the cops.

“Okay, missy.” He folded his hands on the table when she sat. “You’ve played your games long enough. Why did you force me to come here?”

“Here meaning Starbucks, right? Because I didn’t force you to come to Santa Fe—you offered.”