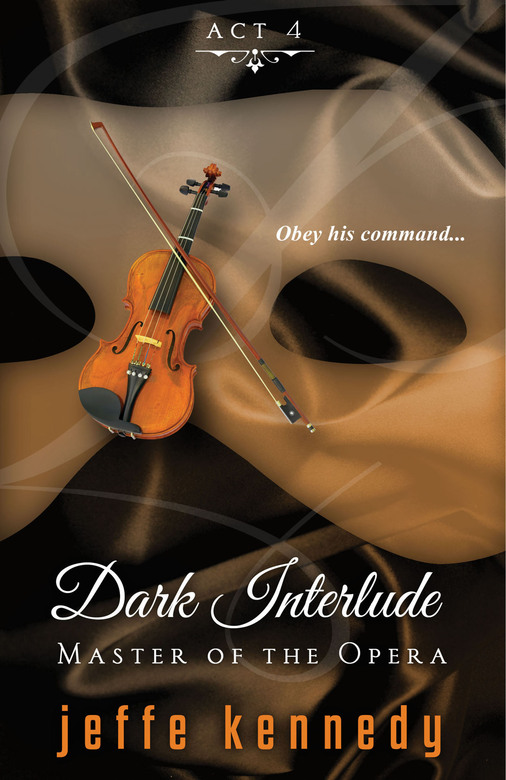 In the fourth fiery installment of Jeffe Kennedy's scintilliating Master of the Opera, a woman surrenders—body and soul—to the one man who is everything she desires, everything she craves, and, possibly, everything she fears. . . Reeling from the discovery of a dead body in the Sante Fe Opera House, intern Christy Davis is forced to reassess the strange, erotically-charged relationship she's forged with the mysterious masked man who lives in the labrynths below. Could her masterful lover be capable of murder, and worse? Perhaps it was the thrill of danger that drew Christy to him in the first place—like a moth to the flame—instead of a more conventional romance with the opera house's handsome benefactor, Roman. For the sake of her sanity, she must at least give Roman a chance. But for the love of her master, she must give in to every wild fantasy, every wicked game, and every whim he commands. . . Is Christy prepared to make the ultimate sacrifice? To surrender her heart, her soul, her everything? First she must acknowlege the truth: a woman in love can serve only one master. . . 16,100 Words

Sunday could not have been a sunnier, more brilliantly beautiful day.

Everywhere the lilac bushes hung heavy with their panicles of sweet blossoms, lending a drowsy, syrupy feel to the hot June sunshine. Light poured through the stained-glass windows and open doors of the Basilica of St. Francis. Between the soaring music, the bright summer clothes of the people attending Mass, and the venerable beauty of the ancient cathedral, it seemed that nothing unsavory or violent could happen in the world.

Christy clung to Roman’s hand, and he glanced down at her with a reassuring smile and slid a strong arm around her shoulders. He was happy with her. Pleased that she’d come to her senses and appreciated him and what he so generously offered her. She’d even worn the new dress he’d brought her as an apartment-warming present—without pointing out that a gift like that was supposed to be something for the home, not something to wear.

She copied him on the motions of Mass, murmuring the right sounds under her breath, a sotto voce chorus of general agreement. Overall it wasn’t so different from other church services she’d attended, with the possible exception of all the kneeling.

That reminded her, with a deep, painful twist in her groin, of kneeling in front of the Master, and the dark, sexual things they’d done together. She’d felt then that she’d crossed into another world, and now it seemed she stood on the other bank of the river. She had returned to the land of the living, where the sun dispelled the shadows, where nice people went to church on Sunday morning and your boyfriend gave you demure silk dresses to wear to visit the people who’d been friends of your family since you were a child.

Where women weren’t kidnapped and tortured nearly to death.

Carla was out of intensive care, at least, and was expected to recover. The doctors had managed to repair the worst damage to her internal organs, and the greatest concern now was the amount of skin disruption and the inevitable infection. Those were the words Charlie used, echoing what the docs had told him. It called images to her mind of the skin suppurating and separating, infection bubbling out, corruption of the flesh.

She hadn’t been back to the opera house since they’d found Carla, draped over Christy’s desk like an obscene offering.

None of them had. The police had sealed the place and seemed quite certain that what had happened to Carla had occurred on-site. Detective Sanchez had grilled Christy for hours on Friday, asking her over and over what she thought the note meant. As with the others—the ones the police still did not know about—it was direct and simple, cursive script on vellum.

Was Christy the object of affection and Carla’s bloody, tortured body a tribute to her? Or was Carla the one who was loved? Why was she left on Christy’s desk?

She didn’t know. It made no sense to her either. The Sanclaro lawyers sat with her through the interrogation, cautioning her on which questions not to answer, insisting she be left alone, since she clearly could not have committed this crime and therefore was not a suspect, frustrating Sanchez to no end.

It had helped, though, to remind her of what truths she danced around.

Including the very real possibility that the Master had hurt Carla. That he’d tortured and murdered Tara, too. Christy rocked from side to side on the hard wooden pew, sure she felt the bruises he’d left on her and she’d enjoyed receiving. Beyond that—she had reveled in it.

She worried, now, that some deep fault in her character had been exposed, that she might be fundamentally wicked at some basic level. Was her ghostly lover truly a cruel and perverted murderer—and had she been so attracted to him for those very reasons? Like goes to like. She’d been running to that and away from Roman, who only wanted to protect her, to hide her from the cruelty of the world.

His arm slid away and he pulled down the kneeler so they could pray yet again.

Not knowing how else to ask for it, she wished to be cleansed of the taint. She eyed the wooden closets along one wall that Roman had said were the confessionals, longing to climb inside one, close the door, and spill out all the secrets she’d been keeping.

It didn’t escape her that the only person she hid nothing from was the very being who sat at the center of her web of lies.

Everyone folded up the kneelers, then stood. She followed a. . .