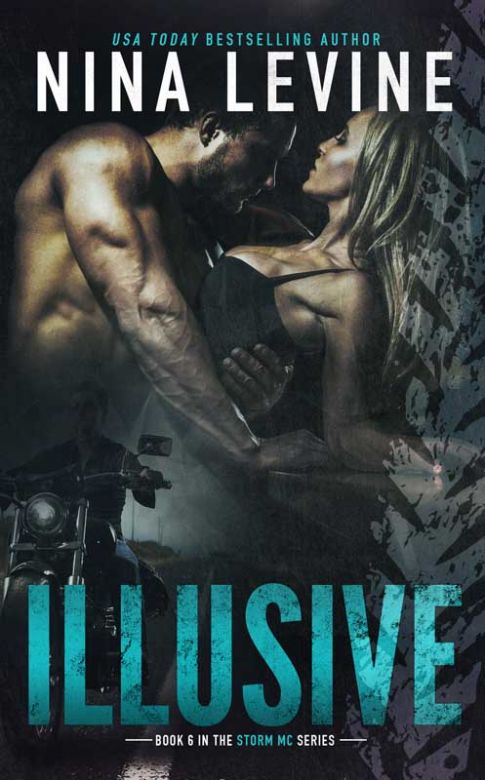 Illusive was hot, engaging, and emotionally raw, proving yet again how well Nina can dish out a biker book boyfriend!

Becca from Prisoners of Print Blog

He's been burnt by love.Griff Hawkins keeps his pain locked away and the ghosts of his past buried even deeper. Three years ago, he chose the Storm MC as his family and accepted the ways of their violent world. These days, he lives his life with one rule - don't get attached to anyone but his club.She longs to be loved.

Sophia Barnes aches to know real love, and lives her life with arms wide open, ready to embrace the possibilities that come her way.When Griff's past is exposed and his place in the club is jeopardised, he fights for his family the only way he knows how, regardless of the consequences. That is, until he meets the woman who brings him to his knees, giving him something to lose.Can they teach each other to leave the sins of the past behind in order to find love, or will Griff's demons dictate their future?

I settled back into the barstool and raised my beer to my lips, chugging the drink until there wasn’t any left in the bottle. Jerking my chin at the bartender, I indicated for him to get me another. I’d been here for two hours – he knew my drink and had it to me fast because he also knew I’d tip him for that, and in a city that didn’t do tips, and in a job that didn’t pay well, he was out to make every last cent he could. I knew that because this bar happened to be my local and I frequented it daily at the moment.

People had no fucking clue how little time they had left on this Earth, and they pissed that time away on mindless pursuits and petty arguments that, when all was said and done, didn’t mean a damn thing.

I knocked back more of my drink, letting old memories take over my thoughts.

My mother smiling as she served our traditional roast meal for lunch on Christmas day, my father settled in his armchair with his beer as he watched the cricket on Boxing Day, and my younger brother, Simon, playing with his Lego. He fucking loved that Lego, even as he got older.

Yeah, Christmas at the McAllister’s was all about the food, the cricket and the goddamn Lego.

I lifted my drink to my lips and finished it.

Why the fuck do you do this to yourself every fucking year?

My hand squeezed the bottle as I placed it back on the counter. Staring at it, I thought about that question. This was the only time of the year I allowed these thoughts to come. They were out of bounds for the other fifty-one weeks.

Fuck knew, but what I did know was that as much as I had tried to move past what had happened to them, the murders of your family weren’t something you ever got the fuck over.

And when those murders had taken place the day after Boxing Day, the memories of cricket and Lego and food didn’t surface quite as easily as the memories of blood and horror that a murder scene never let you forget.

Yeah, the gift that keeps on fucking giving.

I’d thought this year might be different. Madison and her Christmas party had almost dragged me away from my yearly ritual of trying to wipe the memories out with alcohol every day leading up to the anniversary, but in the end, nothing ever pulled me from it.

Storm might be my family now, but sometimes, even family isn’t enough in life.

Sometimes, all you have is you and the choices you’ve made, and the bed you choose to lie in.

And I’d made my bed years ago.

“You want another one?” the bartender asked, pulling me from my thoughts.

A pang of guilt hit me that I’d missed the Christmas party, but I quickly pushed it aside. I didn’t attend many of the club get-togethers so it wasn’t like they were used to seeing me at one. For some reason, though, this time felt different.

The bartender saved me pursuing that line of thought when he placed another bottle of beer in front of me. “Thanks,” I said, and promptly swallowed a quarter of the bottle. And then a set of long legs caught my attention, and my gaze followed them up to a firm ass covered in denim shorts that – fuck me – would make a man give up a day doing that one thing he did that no one ever got to interfere with. I lazily drank more of my beer as I watched the woman exit the bar. Couldn’t even tell you what she wore on the top half because my eyes never left that ass and those legs.

The things I could do to that ass.

As the door swung closed behind her, my gaze zeroed in on something she’d dropped. I moved off my barstool, walked to the door, and picked it up. A piece of paper with an address scribbled in female handwriting – she’d likely need this, so I exited the bar in search of her. The muggy night air rushed at me, and I welcomed the warmth. Looking around the crowded car park, I eyed her to my left.

“You dropped this on your way out,” I said, holding the paper out as I approached, trying like hell to keep my eyes on her face, rather than on her body.

“Thanks,” she said as she took it from me, her eyes widening, and her body shrinking away from me. After quickly running her gaze over the paper, she looked back up at me and added, “I need this so I really appreciate you taking the time to bring it out to me.” Her voice wavered slightly, but she forced her words out.

As much as she seemed like she wanted to get as far away from me as she could, her eyes narrowed on me and she asked, “Do we know each other? You seem familiar.”

“Sweetheart, trust me, I’d know if we’d ever met, and we never have.” I finally gave up the internal battle to keep my eyes on her face, and dropped them to her body. Bad fucking move. This woman was made of lethal curves and hollows that I wanted to dedicate some serious time and attention to. The shorts and tight black v-neck she wore revealed them all.

A neck I could wrap my hands around.

Wrists I could decorate with rope.

An ass I could paint red with my palm.

My gaze shifted back up along her neck to her face, and my hand curled into a ball as I imagined gripping her long, blonde hair from behind and pulling her head back so I could sink my teeth into her neck.

Marks on her skin, put there by me – the vision came out of nowhere and hit me fair in the gut.

“I don’t know, you seem so familiar,” she said with a shrug, grabbing my attention again. And then she smiled, and god-fucking-damn if it wasn’t the sexiest smile I’d ever seen. “And you’re too good-looking for me to be getting mixed up with someone else.” Her voice held no more uncertainty of me, and her body relaxed.

Time to get out of here; this woman might be turning me on, but everything about her screamed pure, and I was far from the kind of man who should be trusted with pure. Taking a step away from her, I spoke a little harder than I meant. “No, I can assure you we’ve never met.” I jerked my chin at her. “Have a good night,” I added before turning and striding back to the bar.

Once inside and settled back on my stool, I finished my beer and ordered another. And attempted to put the blonde out of my mind. She was not the type of woman I pursued so it should have been an easy task.

It was far from fucking easy.

She’d stirred my deepest primal desires. From her easy smile to her trusting nature to the sense I’d gotten from her that she was untainted – it was like waving a red flag at a bull, and I was the bull, ready to take and bend and break.

Just as I was envisioning a long night being taunted by not only the ghosts of my past, but also the blonde, my phone rang, distracting me. And fuck, the number flashing on caller ID stunned the hell out of me.

“Danny,” I answered, wondering what the hell my cousin was doing calling me out of the blue after two years of no contact.

“Michael,” he greeted me, his voice clear of emotion.

“To what do I owe the pleasure?” I asked as I took a swig of my drink.

“I’m giving you a heads up…the Bond case is finally going to trial and you may be called as a witness. I couldn’t find a way around it.”

“Fuck,” I muttered as I ran through scenarios in my mind of how this could play out. Any way I spun it, not good.

“Yeah, I thought you’d want to know, especially seems as though the media is all over this.” He paused for a moment. “Michael, if they call you, your name and identity will be splashed all over the media in Australia. There will be no way for you to avoid it.”

I threw the rest of my beer down my throat and slammed the bottle down on the bar. “I fucking realise that, Danny,” I snapped.

“Don’t take this shit out on me. I told you to get out of that club years ago. You had what you needed from them so I never could work out why you chose to stay. The boys and I can try to protect you from them if this all comes out, but there’s only so much our badge can do for you. Storm has a long reach, and if they want you dead over this, I’ve no doubt they’ll go to every length to make that happen.”

I drew in a slow, steady breath, trying to keep my anger in check. “I am fucking Storm, Danny. I know how far our reach goes and I sure as fuck know how we deal with shit like this, so don’t try and tell me what I already know. I never wanted anything to do with that Bond case all those years ago, and I damn sure don’t want a thing to do with it now. You need to find a way to make it go away, and you also need to make sure nothing else comes back to haunt me. I’m done with that part of my life, and mark my fucking words, if you don’t fix this, you won’t like the ramifications.”

Before he could respond, I ended the call. Then I paid my bill and stalked out of the bar. Staying here drinking was not a good idea in this frame of mind. Taking my frustrations out on a punching bag, however, was a fucking good idea.