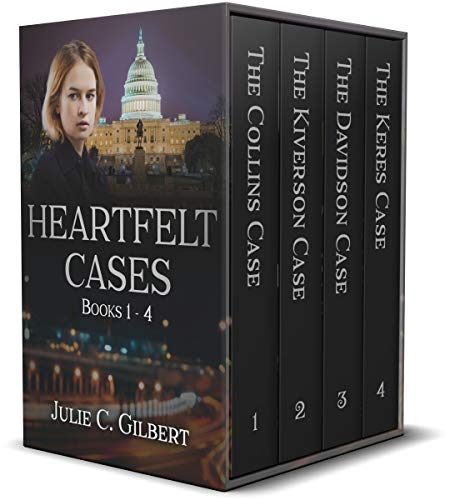 On the surface, Ann's job is simple: catch bad guys. She trusts God with her life and has no problem living by the FBI's motto of Fidelity, Bravery, Integrity.

But she isn't always the one facing danger.

She'd take a bullet for a friend, but can she truly protect those she loves?

The Collins Case: The agents race against time to find a kidnapped family.

The Kiverson Case: Ann and Patrick battle a man bent on revenge.

The Davidson Case: Ann scrambles to discover who wants her sister dead.

The Keres Case: Ann, Patrick, and Baker face a serial killer looking for a challenge.

Audios are all available individually. No combos of that because I have too many narrators.

After work on Thursday, Rachel Collins stopped at the grocery store for basics and something special for dinner. Having heard many horrible stories, she didn’t dare leave the children alone in the car. Warnings about best behavior fell upon deaf ears. Somewhere, she found the patience to tolerate Jason and Emily’s childish antics.

“Why you frown, Mommy?” Jason asked.

“I’m just tired, Jay,” replied Rachel. Her mind took a trip back to the office where a thousand little things had gone wrong. The secretary’s morning car accident had added considerable stress to Rachel’s hectic life. Her trust in God’s sovereignty didn’t make lousy days any easier to live through.

For years she had believed Christ to be mere church rhetoric. Finally, during a particularly rough college year, she had accepted God’s gift of salvation through Jesus Christ’s sacrifice. It pained her that Chris avoided church. Come Sunday, Rachel forced a bright smile, sang in the choir, helped in the nursery, and coordinated other children’s ministries. In fact, she kept herself so busy with work, kids, and church that her spiritual walk floundered. Stress and bills were her biggest problems, but she understood that they allowed her family light, food, warmth, and a fine home in the great state of Pennsylvania. She knew the “could-haves” and the “what-ifs” could drive her mad so she decided not to worry about the future.

“When we get home, you need a nap,” Jason said.

Her son’s solemn suggestion drew Rachel back to the present. She chuckled softly. Children were a blessing, even if they did jump all over her nerves sometimes.

Annoyed at herself for wandering down the wrong aisle, Rachel winced at the volume, grabbed Emily’s wildly waving hand, and said, “Hush, sweets, I see them.”

That’s what you get for not paying attention. Oh well, the damage is done. The pantry’s nearly empty anyway.

She let them each pick a favorite and finished the hike to the back corner where the main selection of milk and eggs were located.

Ingenious to put milk in the back, Rachel admitted.

Next, they swung by the fish department where Jason made a face.

Rachel quickly picked up shrimp for dinner, before speeding over to the bread aisle which offered a safer zone for their delicate noses. Perhaps she saw the young man watching her, but if she did, she thought nothing of it. Her children often drew strangers’ stares just by being charming or crazy, sometimes both. Eventually, Rachel made it to the checkout lines. Despite the two extra packages of cookies and a last-minute addition of crackers, Rachel counted the expedition a success and headed for home.

Pulling into the garage, Rachel shut off the car, unpacked the kids, and ushered them into the playroom where they would be safely out from under foot. This would make grocery unpacking and dinner preparations much easier. So far, the afternoon routine was going well.

On her way back to the garage, Rachel thought she heard a noise. She froze mid-step and experienced the creepy feeling of being watched. Observation in public was one thing, but being watched at home was downright disconcerting. Goosebumps sprang to life up and down her arms. Seconds later the air conditioning turned on, masking other noises. With a shrug, Rachel continued toward the garage thinking, Scaredy cat.

Paper grocery bags filling her arms, Rachel busily planned the evening’s activities when a man’s broad chest materialized before her. Reflexively, she stepped back. Her head snapped up to look at him.

Before she could scream, a rough hand covered her mouth. Another arm curled around her slender waist and drew her back a step. Stale breath washed over her in a nauseating wave. She screamed, but it came out muffled and ineffective. Fear fixed her hands in place. Her heart pounded and her eyes locked on the assailant in front of her. He was of average height with neat hair, dark eyes, and a clean-shaven face that could have been cut from stone.

Go away! What do you want? Rachel didn’t get far with her frantic thoughts.

“Relax, Dr. Collins, it’ll be far easier if you cooperate,” said the first man. He took the two grocery bags from her stiff arms and placed them on the kitchen table.

I bet it would. There’s about a snowball’s chance in hell of that! Belatedly, Rachel realized that the time to make a move was over. Oh God, help! She struggled against the hands holding her.

“Calm down, Doc! The boss just wants to meet you,” said the man behind her. He sounded young and frantic.

Frustrated tears welled up as the man tightened his grip.

I’m in a nightmare.

Sweat from her labored breath built up under the man’s hand making it slippery. Desperately, Rachel twisted her head to the side, hoping to at least gain enough room for a good scream.

The first man’s hand shot out faster than Rachel thought possible and closed around her neck. He turned her head so she faced him squarely, brushing the other man’s hand away. “There’s little time for introductions, Dr. Collins. Stop struggling and I promise your children will be fine.”

The man’s firm tone and cryptic words made every muscle in Rachel coil with tension.

What happens to them if I do struggle?

Her mouth was dry, and she could barely think.

The first man slowly released her neck and gently traced her jaw with his forefinger. “Now, I want you to be real still while I give you a shot. It’ll just knock you out for a short nap.”

Despite the man’s soothing tone, Rachel’s panic level spiked even higher. Then, she noticed that he wore a paramedic’s uniform and some of her panic morphed into bafflement.

“My partner will need to shift his grip, but it’ll be over in seconds, I promise.”

The other man’s hand fumbled at her waist. He tossed her cell phone to his partner

who dumped it into a grocery bag.

Rachel’s stomach lurched as the sense of desperation hit her anew. She barely felt the sharp needle enter her upper right arm. Unshed tears stung her eyes and blurred her vision.

“Mr. Parker will explain everything later,” said the other man, easing her toward the ground.

The hard-faced man’s words stopped making sense to Rachel as her mind shut down. The urge to sleep was strong, but she fought it to think, Jason, Emily, are you safe?

Night rapidly approached as the two men carried Rachel Collins to their van.

Jense returned and coaxed the children out. “Your mother’s very sick and needs to go to a doctor. Me and my friend are here to help.”

Jense smiled at the small child and picked her up. “We will later, but now, we’ve got to get your mommy to a safe place. Come on, she’ll want to see you when she wakes up.”

Emily reached out and touched the scar above his right eyebrow then started crying for her mother. Jense held his hand out to Jason. Reluctantly, the boy took the rough hand.

As soon as the two Collins children were in the white van, Thomas Randle drove off. The entire operation had taken less than ten minutes, but he was anxious to get back to South Dakota. He had never liked kidnapping jobs. They rarely ended well.