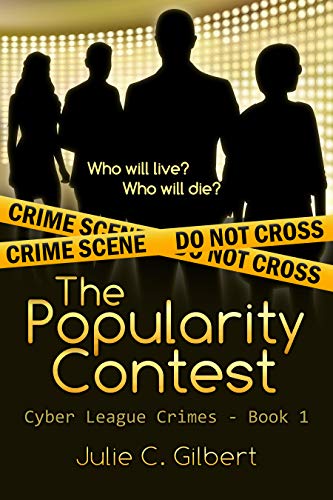 Popularity never meant so much.

When the Club runs a contest to see which profession will triumph, they gather some involuntary contestants, including FBI Special Agent Megan Luchek's sister, Tara.

Gambling's always more fun when the stakes matter. Nothing could be higher than life or death.

To save her sister, Megan must stop the contest by any means necessary, even if that means infiltrating it the hard way: as a prisoner.

Tara Sidell pressed the button to unlock her Nissan Altima. It flashed an acknowledgement. A full day of work followed by two hours of serving soup had worn her out. She couldn’t wait to drive home and curl up on the couch with Jason and Charles. Her husband might be warmer, but their Maltese was fluffier. She loved cradling the dog while her husband held her. She also had big news for them.

How should I tell them?

Taking out her phone, Tara contemplated calling her husband. She didn’t want to blurt the news over a phone but needed to hear Jason’s voice.

Something knocked into her arm. The phone tumbled from her hand and hit the sidewalk with a sickening crunch. Instinctively, she halted even though her brain ordered her to forget the phone and run.

An arm wrapped around her neck, pulling her backwards off balance. Dropping her right shoulder, Tara pivoted toward her attacker, throwing out both hands to break free. Something else smashed into her back right between the shoulder blades, dropping her to the ground. Before she could recover, a gun appeared in her face.

“Stop moving, or I shoot you,” said a male voice.

A hood slipped over her head. Hands pulled her upright and used zip ties to secure her wrists behind her back.

The rest of her protest died in the chokehold that knocked her out.

“What’s wrong?” asked Lillian Marquez, pausing in the doorway to their cave. She’d been on her way to the kitchen to get a drink when she heard the kid’s complaint.

The screen in front of him showed the image of a smiling woman with striking blue eyes and wavy blond hair that fell past her shoulders. She looked familiar, but that could mean nothing beyond the fact that she gave off a girl-next-door vibe.

“C-Team got an early start tonight,” said the young man. He nervously ran hands through his greasy brown hair and gripped his head.

Lillian couldn’t remember his name. She’d just arrived at this safehouse tonight to begin monitoring the competition. This kid was one of four tech boys kept on staff. Thus, his problems were inherently hers.

“It’s early, but they’re allowed to begin,” said Lillian. She carefully modulated her tone so they wouldn’t pick up on her misgivings about the whole deal. Apparently, her recommendations meant little to the higher-ups. “Did they document the kidnapping properly?”

“They did, but G-Team messed with their info.” The kid looked genuinely scared, but at least he stopped gripping his head like it would fall off.

“How?” demanded one of the other tech guys. He shoved the first young man out of the way and tapped a few commands into the computer. Soon, the woman’s picture disappeared, replaced by a wall of green and blue code. His head started bobbing as he read the code. “Crude but effective.” The way he rendered the conclusion emphasized his New York accent.

“What happened?” Lillian enunciated carefully so the tech guys would get the message that she needed answers immediately.

“You discovered it, V,” said the second tech guy, sliding his rolling chair to the left. “Sharing honors belong to you.”

Taking his place in front of the computer again, Vinny brought back the woman’s picture. Then, he opened a new screen.

“It’s ingenious if you think about it,” said the other tech guy.

“Shut up,” snapped Vinny. His eyes darted back to the screen. “We made that list for a reason. We’re in big trouble.”

“Who is she?” Lillian wondered, trying to stave off a sinking

The announcement sobered the second tech boy. He sat up straighter and cursed.

“No way! They caught the fed?” he said, grinning stupidly. “They’re my new heroes.”

“No,” Vinny said with strained patience. “They caught her sister, you moron. The family court judge.”

“Why does that matter?” asked the second tech guy. “Judge is one of the target professions.”

“It matters ’cause she’s family,” said Vinny. “My family. And she’s not a backwoods, small town judge. The police are gonna have media and politicians camping in their parking lots until she’s found.”

“So, we have them kill her and start over,” said the callous one.

The tech guys continued to yap at each other like puppies, so Lillian kicked them out of the room. She needed to think. The Club had several FBI agents under their thumb or on the payroll. In recent dealings, she had come across exactly one who would be a thorn in the side no matter what they did.

What are the odds?

Lillian firmly believed that the power running the universe had a mean streak and a nasty sense of humor, but she needed confirmation. Noting the woman’s name, she accessed the internet and ran the name across a few social media sites.

Neither the agent nor the judge kept much of a social media profile that wasn’t under cyber lock and key, but old high school pictures showed Lillian that Sidell was the married name of Tara Olivia Luchek.

Eventually, she came across an old picture with a clear caption: Congratulations to my baby sister for graduating from the FBI Academy! We love you, Maggie.

Picking up her phone, Lillian called the one person she could trust. She needed to update O about the situation, but she wanted to hash through the possible recommendations with Steel first. Even if O disregarded nearly everything she said, she intended to do her job well.

After locking the door to keep the conversation as private as possible, Lillian sketched the situation for him.

said, attempting to keep a level tone. “One hacked another and got that

team to snatch somebody on the Protected List. It’s going to kick up unnecessary heat and make the entire competition much harder to run.”

Lillian made a face, even though Steel couldn’t see her.

“I know O’s going to make that argument, but I strongly feel we should release the woman and lay low for a few months,” said Lillian. “Maybe start with a low-risk venture like Street Sweeper.”

“Release?” Steel echoed, incredulous. “Any delay is gonna cost us big time. Who got bagged?”

“You know how to fix the problem,” Steel said eventually. “End the agent. That’s what O’s gonna say.” He sounded nervous.

How does he always know what O’s going to say?

“If you make it hunting season on feds, the investigation is gonna be intense because it raises the stakes,” Steel reasoned. “But it might make it easier to muck with if we plant people in the right places. I’ll check in with Little G-man and see what he thinks. We might not have the manpower for that approach. Do you want me to have BB send you some boys as backup?”

“I should be fine,” said Lillian. “O has a security detail in place to control the contestants and their victims as necessary.”

She considered bringing up the issue of the tech guy and his connection to Megan and Tara, but she dismissed the idea. She didn’t want to hear Steel say she should kill the kid. Involvement with Club business always involved dark deeds, and she accepted that. Still, killing a kid because he might be trouble in the future seemed exceedingly cold.

“Be careful. And control the situation,” said Steel.

“I will,” Lillian promised. “Thanks for listening. I’ll make my call to O now.”

“I can tell you what he will say, and for once, I agree,” said Steel. “Let the team that caught the judge keep her if she has decent pull with the gamblers.”

“And Agent Luchek? What do you think he’ll say about her?”

“You can try to control the agent through the sister if you like,” Steel reminded her, “but it’s safest to remove her altogether through one

of the other events. If your tech people are good enough, have them run several events simultaneously to overwhelm law enforcement and keep betting interests high.”

An odd feeling stole over Lillian as she ended her call with Steel. Something about his last piece of advice didn’t sit well with her. His plan—like O’s—was pointlessly reckless. It’s like he wanted the venture to fail.

She agreed with the sentiment but couldn’t snap out of the odd mood. The exchange played through her head several times. Deciding she needed that drink before dealing with O, Lillian unlocked the door and headed for the kitchen.

“She’s too soft,” declared O. His harsh whisper made the words more sinister. “Get rid of her. She’ll destroy everything.”

“No!” cried Steel, shaking his head vigorously. Rushing to the mirror, he glared at his reflection. “She’s Carlos’s kid!”

“Carlos is gone,” O hissed. “What’s left is an empty shell. Think of his legacy. Protect it. Like he protected us.”

“I won’t have her killed,” Steel said stubbornly. He set his shoulders in defiance.

Slowly, the stiffness faded, and his lips curled into a lazy smile.

“Give her time!” Steel begged, taking a different tact. A desperate expression crossed his face. “She’s good at what she does. She can do the job. I swear it.”

The tension eased from his muscles.

A dull throbbing in Steel’s head announced the end of the episode. Usually, a firm hand could control O, but lately, he’d grown bolder. For years, as the mysterious boss nobody but the truly privileged got to meet, he had been a convenient way of controlling others. But his taste for violence was getting stronger.

Pushing his concern aside, Steel sat down at his desk and toggled through the hidden camera feeds from the safehouse. Once the prisoners and competing teams arrived, he could have them ramp up the betting.