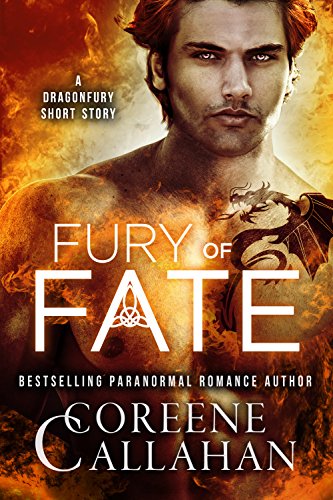 *WINNER of 2015 Authors After Dark BOOKIE Award for Best Shifter Short Story of the Year!*

Fury Of Fate (A Dragonfury short story)
She's determined to try something new...
Sasha Cooper is a woman on a mission. Determined to let loose and live a little, she takes her best friend's advice and embarks on a night of passion with a complete stranger. No regrets in the morning. No looking back either. But when the one she chooses turns out to be a Dragonkind warrior, Sasha knows she's in trouble—and that the man she believed was a dream come true could end up being her worst nightmare.

He never intended to get involved...
Ivar, leader of a rogue faction of Dragonkind, isn't a pushover. So when a noisy neighbor jeopardizes the security of his secret lair, he decides to take care of the problem once and for all. Little does he know banging on Sasha's door will send him on a passionate odyssey unlike any he's ever experienced. But when the night takes a deadly turn, he's left little choice—escape from the woman who possesses the power to kill him, or die trying.

Coreene loves to hear from readers! Feel free to contact her at coreenecallahan(dot)com.

The question unearthed her imagination. Sex with a stranger. Sasha bit down on her bottom lip. Was her best friend serious? Probably. The queen of one night stands in college, Lily didn’t suffer from compunction. At least, not of the sexual variety. Her friend always followed her fancy, did as she pleased along with anyone she wanted. Raised to be a good girl instead of a free spirit, Sasha had never been sexually adventurous. In her mind, sex equaled commitment. But that wasn’t true, was it? Women slept with men and walked away all the time. Easy-peasy...no strings attached. No guilt or the least bit of shame involved.

An interesting concept. Completely taboo. A fantasy in the making.

All right, so it sat on the far edge of her comfort zone, but well...

Sasha pushed away from the couch back. Sex with a smokin’ hot stranger. Sex without any strings. Sex, sex, nothing but sex, so help her God...free and clear in the morning. Perched on the edge of the seat cushion, knees pressed together, she frowned. Holy crap. She was actually thinking about it—wondering, imagining...fantasizing about the guy she would pick out of a crowd. Weird, but...she could picture it. See the scene unfolding in her mind’s eye. Frame by frame. Each touch. Every sigh. All the pleasure as she—

“Look, it’s the twenty-first century, sweetie. You’re allowed to have a little fun,” Lily said, tempting her. Urging Sasha to be as adventurous in her love life as she was in her job. “Drop the good girl complex and be a bad girl for a change. Grab the first guy you’re attracted to, go dancing all night, then take him home. Be smart about it, but...”

Sasha cringed, bracing for another explicit suggestion and...gosh darn it all... more temptation. ’Cause yeah. With the seed planted, Sasha admitted its allure, and that the idea was also starting to grow—expand, take on a life of its own inside her head.

“Oh, right...thanks babe. Good suggestion.” Lily paused to give her fiancé a smacking kiss. Static hissed as she put the phone back to her ear. “Ben says to make sure he’s not married first.”

Excellent advice. The best, really. Particularly if she decided to go through with—

Popping to her feet, Sasha tittered on her high heels. “Crap.”

“Gotta go. My Jeep’s going ballistic again.” Gaze locked on the keychain half hidden behind her purse on the countertop, Sasha hightailed it around the armchair. “Call you later.”

With a quick touch to the screen, she hung up on her best friend. No time to talk, never mind finish the sex-with-a-stranger conversation. She needed to grab her keys and get out the front door. Right now. Before her car alarm woke up the entire neighborhood. Otherwise, crotchety Mrs. Crowley would call the cops on her again and...

Oh man. Not a good idea. Neither was dallying.

Her new neighbor might be eighty-two years young, but she was fast on her feet. And even quicker on the trigger. The old fox was no doubt already out of bed, stick-thin form bundled in a bathrobe, fuzzy pink slippers doing double time as she ran for her rotary phone. In a flap, Sasha raced past the trio of stools and skidded around the end of the peninsula. Tossing her phone onto the counter, she grabbed her keys on the fly-by, and without missing a beat, headed for the door.

Bright light from the Jeep’s headlights lit up the kitchen window.

Stupid car alarm. Persnickety to the point of demonic possession, the thing went off all the time. But worse? The aftermarket system refused to deactivate unless she stood within ten feet of it. She pressed the red button anyway, thumb working overtime. Nothing yet, but as soon as she stepped outside, it would quit.

One never knew when dealing with the eight-year-old vehicle she drove into rough terrain on a regular basis. Banged up and rusted in spots, her Wrangler had seen better days. Sasha didn’t care. She loved her 4x4, dents, scratches and all. Only one problem—the cheap car alarm her mechanic had installed. She really needed to do something about that...like kill the idiotic thing, just yank it right out by its electronic gonads and be done with the drama. Heart hammering the inside of her chest, Sasha slid to a stop in front of the door. Still pressing the button as if her life depended on it, she palmed the handle, yanked the door open and—

Ran straight into a man.

Hand raised to knock on her door, her visitor rocked back on his heels. “Fucking hell.”

Well, that was one way of putting it.

Another would be wow. Add YUM to the package and...uh-huh. She had a winner, ’cause holy Hannah on a swizzle stick, he was flat out gorgeous. Big, bad and sculpted, at least six and a half feet of male glory. Sexy as hell too, with black sun-glasses shielding his eyes. The wraparounds did wonders for his face, enhancing his angular features, accenting his dark red hair, giving him an edge that screamed “I’m great in bed.”

Her libido purred in appreciation.

Instant attraction lit the fuse. Curiosity collided with arousal. Sasha looked him over again. Faded jeans encasing long legs. Scuffed boots on his feet. White T-shirt stretched over a muscular chest and wide shoulders, beaten up leather jacket over the whole. Forcing her lungs to unlock, she took a deep breath and...sweet Mary. He smelled fantastic too, like exotic spice, dark fantasies and...mercy. Mr. Tall-Dark-and-Dangerous. He looked the part, and her imagination took flight. Naughty thoughts filtered in. Ones that circled around sex and the fact he was most certainly a stranger.

Still staring at him, Sasha extended her arm over the threshold and pressed the button. Headlights stopped flashing.

Silence descended, cranking her tight, making her wonder and imagine and...ache from the inside out. Taut muscles pulled at her abdomen. Sensation spiraled out, sending shivers up her spine and tingles to interesting places. She swallowed past a bad case of dry mouth. Gaze pinned to hers, he dropped his hand and leaned toward her. Not a lot. The movement was slight, more subtle shift than true displacement. But Sasha knew what it meant. Along with what he wanted. Call it woman’s intuition, but...

He was as interested in her as she was in him.

Her gaze dropped to his lips. Great mouth. Full, masculine...made for kissing. Her heart picked up a beat, and then another. Sasha listened to the blood rush and blew out a pent-up breath. Should she...or shouldn’t she? An excellent question. One she’d never asked before when it came to sex. But as the silence expanded and the cold drifted in through the open door, Sasha wanted to be brave. Just this once. Maybe Lily was right. Maybe she needed to let loose and live a little. Maybe the man standing on her doorstep was what she needed. A sexual adventure wrapped up in sinew and bone, so...

To hell with it. Time to take a risk along with a leap of faith.

The Russian word rolled on his deep voice. Oh God. Hot as hell and a sexy accent. Cupid must love her, after all.

He opened his mouth—no doubt to ask if she’d lost her mind.

Sasha didn’t give him a chance. With a quick step forward, she fisted her hands in his leather jacket and tugged. The move caught him off guard. She yanked again, and knuckles pressed to the wall of his chest, pulled him off balance. He stumbled over the threshold. She slammed the door in his wake. A growl—the sound low and lethal, yet somehow full of welcome—rumbled up his throat. Bolstered by his reaction, Sasha popped onto her tiptoes, and fingers sifting through his hair, licked his bottom lip. He tensed in surprise. Sasha refused to back down. She needed a taste. Of pleasure. Of passion. Of the desire she’d kept under wraps for far too long. After that, he could do as he pleased. Push her away. Pull her close. Make love to her until she fell into pleasure-bound oblivion.

Totally up to him.

Either way, she was desperate to feel. Something. Anything. His hard body against hers—his kiss...hot, wet and deep—would do the trick. So yeah, like it or not, one way or the other, Mr. Tall-Dark-and-Dangerous was going to give her everything she asked for. And exactly what she wanted.