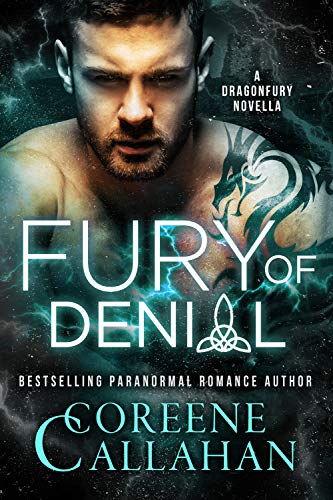 A twist of fate threw them together. Now, a dragon-shifter and a pastry chef must find a way out before his enemies tear them apart.

Blinded in an ambush, Scottish dragon warrior Wallaig has spent half a century in the dark with one thing on his mind—vengeance. When the rogue faction responsible returns to Scotland and targets a human female, he saves her life, determined to exact his revenge—even if it means using her as bait.

Talented pastry chef, Amantha Leblanc dreams of running her own business. With her goal in sight, she doubles down, only to have her plan blown out of the water when Wallaig breaks into her apartment. Dodging a rogue pack of dragon warriors, she’s forced to decide—rely on a blindman to keep her alive or risk everything by going it alone.

Can a damaged warrior help a stubborn chef see the light? Or will dark forces conspire to keep the woman he needs out of his life? 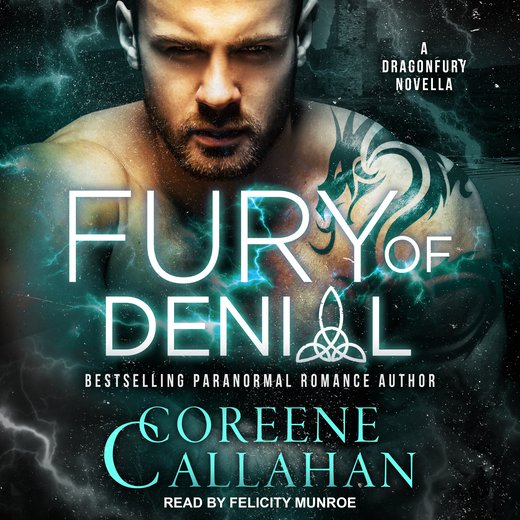 With a tug, she opened both oven doors at once. The scent of flaky pastry and melted chocolate rolled into the kitchen. Amantha breathed deep. Hmm, baby. She could smell that all night long and never get tired of it. Working fast, she pulled out the trays, set the load on cooling racks, and turned toward the muffins. Four tins of uncooked muffin batter went in. She closed the oven doors, ignoring the squeak of old hinges, and snatched the egg timer off the countertop. Twenty-two minutes until the next batch could go in, so onward and upward. Apple spice, here she came and—

Worried about a malfunction, she glanced at the ovens. She jiggled the doors. No problem with the seals. She rechecked the temperature. All good. Everything working well, nothing to be concerned about—

Feet planted beside the island, she stood unmoving and listened. The click turned into a scratching noise. Her attention snapped toward the front door. Another creak, this one louder than the first. Her eyes narrowed. She recognized the sound. Heard it every time she stopped to unlock her door. Covered by carpet and warped by time, the floor dipped in the hallway in front her apartment, squeaking every time someone approached her door. So, either she was hearing things or—

She watched it rotate one way, then the other. Shock morphed into horror. Someone stood out in the hallway, trying to enter her apartment. At three in the freaking morning. Alarm bells rang inside her head. As the clamour got going, Amantha struggled to rein in her fear. One hand pressed to her chest, she played tug-of-war with her intellect. Calm down. Stay quiet. Think…think…think. No need to panic. Whoever stood out there wouldn’t get inside. Double deadbolts would ensure it. Those suckers were strong. Industrial sized. The best of the best. She’d ordered the new locks before moving in. Had watched as the locksmith tested each one multiple times.

The snick made her breath hitch. Her heart took the hint and picked up a beat, pounding against the inside of her breastbone. An awful metallic taste invaded her mouth. Amantha shook her head. No way. Not possible. No one but her and Elise had keys and…

Why hadn’t she thought of that before? Maybe her friend was home. Finally. After a month of being only God knew where. Maybe, she’d been wrong, and Ross right. Hope tightened its grip, shoving fear aside for a second. God be merciful. She was going to kill her best friend. She was going to skewer, then skin her for—

The second deadbolt scraped against metal, getting stuck halfway through the turn.

A soft curse drifted into the apartment from the hallway.

About to step around the island, Amantha came to a sudden stop. Her heart sank. A male voice. Deep, gravel-filled and…she swallowed…infused with a healthy dose of what sounded like anger. Definitely not Elise. And in no way friendly.

Panic skittered down her spine. What the hell was she going to do? Glancing over her shoulder, she eyed the narrow corridor exiting the kitchen. Two choices—hide under her bed and pray he went away or give the fire escape a try. Neither idea seemed safe. Cowering under furniture wasn’t her style. Neither was spending five minutes she didn’t have fighting with the window in her bedroom. The stupid thing always got stuck when she tried to open it. And the fire exit? Amantha cringed. No way would she make it down that thing alive. The rusty structure with weather-eaten stairs barely clung to the side of the building as it was, add weight and whoever stood on it would fall five stories, only to go splat on the sidewalk.

The door jolted as the intruder pulled up on the handle. The shift ended the stalemate as the second bolt unlocked in a slow swivel.

Gaze glued to the door, Amantha snatched the marble rolling pin off the countertop. She backed up a step. And then another, trying to be quiet. Option three sprang to mind. Air left her lungs in a rush. Holy hatpins—her cell phone. She needed to get to her phone and call the police. Right now, before the intruder-maybe-rapist broke in and she lost her chance. Clutching her weapon, she scanned the living room, trying to remember where she’d dropped her purse. Not hanging on the coat rack. Not on the end table next to the door. Her eyes tracked to the purple love seat and…thank God. A brown leather strap peaked out from behind the backrest.

Tarnished brass hinges groaned as the door started to open.

Fear carried her forward, around the kitchen island into the living room. A large shadow fell across the carpet as light from the hallway illuminated her intruder from behind and…goddamn him along with the apartment layout. Sitting adjacent to the entrance, the love seat less sat than six feet from the front door. Now, it was too late. She’d never make it to her purse without him seeing her. And given the size of the shadow he cast, she refused to be within striking distance when he stepped over the threshold.

Abandoning the idea of reaching her phone, Amantha veered left and slid in behind the door. The heavy wood panel swung all the way open. A man came into view. A death grip on the marble rolling pin, she focused on the back of his head.

Muscles quaking, she raised her weapon and, holding her breath, waited. She needed a clear shot. If she missed on the first try, she wouldn’t get a second. The width of his shoulders told her all she needed to know: he was strong. Much stronger than her. Which meant, if he got a hold of her, there would be no need to call the police. She’d already be dead.