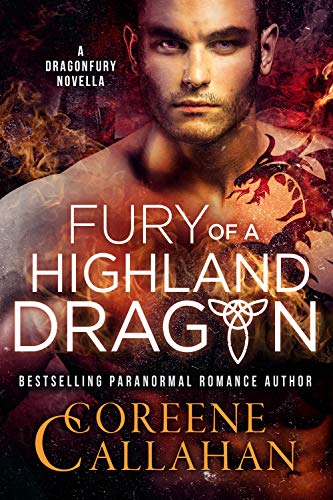 In the first installment of Coreene Callahan's exhilarating Dragonfury Scotland series, a rebel with a cause meets the dragon-shifter of her dreams.

Running from the US government isn't smart—neither is sticking around when accused of cyber espionage.

Framed for selling state secrets, ethical hacker Ivy Macpherson is one of the FBI's most wanted. Seeing no way out, she skips town, triggering a worldwide manhunt. On the run, she comes face-to-face with Tydrin, a man more dangerous than the agents on her trail.

Haunted by the past, all Scottish dragon-warrior Tydrin wants is peace. Hoping to atone, he returns to the scene of his crime and walks into the middle of an armed standoff. Unable to ignore a woman in trouble, he intervenes, only to realize the one he wronged is the woman destined to steal his heart.

Can she forgive him for changing the course of her life? Or will the past ruin his future with the woman of his dreams?

What readers are saying about the Dragonfury series:

“Modern day fantasy and paranormal with hot romance, Coreene Callahan has created memorable characters and a seemingly impossible situation. That is storytelling at its best!” – Reader's Entertainment Book Reviews

“Action, adventure and a sassy attitude light this fabulous take on the classic battle of good vs. evil. Callahan entertains readers right from the beginning, adding a dose of treachery as the book progresses. The redemption of two tortured souls as they strive for happiness makes for enjoyable reading.” – RT Book Reviews, 4½ stars for Fury of Desire; 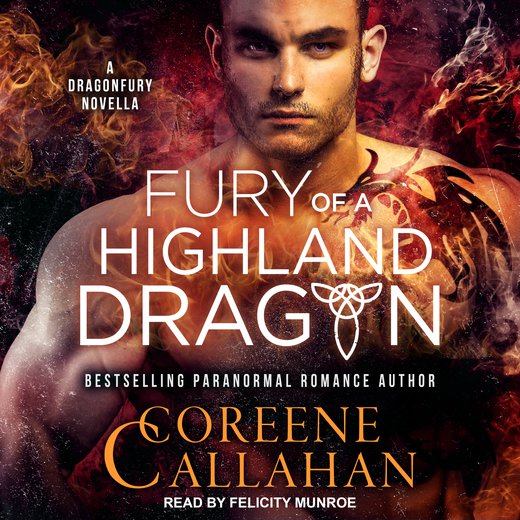 He knew the desolate place by heart. Had memorized every inch: the pale face of every tombstone, each gravel covered path, the open area behind a semi-circle of evergreens where he preferred to land. Folding his wings, he dropped through frigid air. His talons thumped down. Frozen blades of grass crackled in protest before flattening beneath his large paws. Razor-sharp claws cutting into the soil, he scanned the shadows. His eyes narrowed. Huh. Strange, but…

A tingle crawled over the nape of his neck.

He tilted his head and listened harder. Nothing. Not a whisper of sound, just an odd vibration in the air.

Gathering his magic, Tydrin held it a moment, then released it in a rush. His sonar pinged, casting a wide net, blanketing the area as he searched for the source. A buzz lit off between his temples. Tydrin bared his fangs on a silent snarl. Shite. Trouble. The kind he couldn’t identify, but knew lay just beyond the thick copse of evergreens.

Somewhere close to the grave site he intended to visit.

Shifting from dragon to human form, he conjured his clothes. Jeans and leather jacket… check. Heavy-duty combat boots on his feet…double check. Senses seething on violent swirls… tick the last box. All systems go. He was ready to roll. Footfalls silent and pace even, he circled right, headed for the edge of trees, hunting for the threat.

The whispered words tapped along his spine. Unease, and something more—a something he didn’t recognize—twisted his instincts.

Tydrin’s brows collided. The voice belonged to a female. One whose cadence held no hint of a Scottish accent.

A hitched intake of breath, then, “I should have visited before now, and…I’m sorry. I know it isn’t right, but I haven’t been able to face it. To understand how it happened. Why it all went so wrong, and…God. This is way harder than I thought it would be.”

The halting apology made him pause. Curiosity urged him to move closer. Unable to resist the pull, Tydrin stepped from behind the cluster of evergreens and—

Surprise stalled the air in his chest, strangling his next breath.

Feet rooted to the ground, he stared at the female. He blinked to clear his vision. Nothing. No change in his visual field and—bloody hell. It couldn’t be. He must be seeing things. Must be imagining the impossible. But no matter how many times he forced himself to refocus, nothing changed. She remained front and center, kneeling in the dirt, head bowed, hands resting on her thighs. The submissive position drew him tight, messing with his ability to think for a second.

The movement knocked brain cells into motion and…Good Goddess. Unbelievable. She was real. He wasn’t imagining her. Or the radiating warmth frothing around her like sea foam.

Glowing bright blue, the female’s aura lit up the space around her. Her bio-energy hummed and his dragon half woke, setting off a dangerous chain reaction. Bone-deep hunger punched through. His body came alive. His mind dulled, blocking out everything but her.

Long red hair pulled into a messy bun, she shuffled closer to the headstone. Mumbling another apology, she cleared debris away from the granite base. The task was one he usually preformed. On this date, every year when he visited. Right now, though, he didn’t care about his mission.

Or about paying his respects.

Struck stupid by her, only one thought registered—a high-energy female here…in the heart of Aberdeen.

He was in trouble. Neck deep and sinking fast without any idea how to control his reaction. To be expected. He’d never encountered a HE female before, much less stood within touching distance.

Veritable unicorns in Dragonkind circles, HEs were the rarest of the rare. Females whose connection to the Meridian—the electrostatic bands that ringed the planet, nourishing all living things—was so powerful Dragonkind males fought to possess them. An archaic practice, mayhap, but…hmm, baby. With her less than ten feet away, he understood the compulsion. Biological imperative shoved him forward, lifted his feet, urging him to get closer. To touch. To taste. To discover what all the energy would feel like pressed against his skin.

Gaze glued to her, he took a second step. And then another.

Saliva pooled in his mouth.

With his dragon fixated on her, he was past the point of negotiation. Arousal pushed to the forefront, upping the stakes, making his heart pound and his body throb.

His feet moved again without his help.

He drew a deep breath, hoping more oxygen would spark his failing intellect. Frigid air rushed into his lungs. His brain reengaged, force feeding him a shovelful of common sense. A plan. He needed one…right now. Before he did something stupid—like scare the ever-living shite out of the female. Not the best way to go if he wanted to get close. And oh how he yearned to, ’cause…aye. Now that he’d seen her, he wanted to know—how she would taste, howshe would fit in his arms, how it would feel to be fed by such powerful energy.

The thought cranked him tighter.

Excitement skittered down his spine. Tydrin tightened the leash on his control. He didn’t want to frighten her. The moment he did, she’d run scared, and he’d lose his chance.

Which left him with two choices.

Option one—approach her here, in a deserted cemetery, and hope for the best. Option two— wait for her to finish,follow her home, find out everything about her before engineering a chance meeting between them. Tydrin nodded. Aye. Definitely. A perfectly reasonable way to go. But even as he cemented his plan of attack, temptation urged him to drop the invisibility spell, step up behind her, and grab hold. Wrapped her up. Take her home. Love her well.

His dragon half snarled, liking the approach.

He shut it down. The compulsion smacked of stupidity. Was witless in every way, and yet—

He ran his gaze over her again. A twig snapped.

The sharp sound brought his head around.

The female didn’t hear it. Busy with the clean-up, she soldiered on. No change in her posture. No spike of alarm in her bio-energy. Just the scent of sorrow and a desire to make something right. Dragging his focus from her, he scanned the shadowed forest edging the graveyard. His night vision narrowed, then sharpened. A moment passed before he spotted the threat.

Eyes narrowed, Tydrin watched the lead man unholster his sidearm. Raising the gun, the asshole leveled it at the female. Aggression swelled. Catastrophic. Urgent. Lethal. The need to defend her detonated deep inside him. His dragon answered the call, begging to be set free. With a mental flick, he opened the cage, allowing the killer inside him to step out an instant before he moved.

Forget restraint. Table the safe and sound approach too.

Reasonable would have to wait. Goddess knew, he couldn’t. Not with a female to protect and a couple of idiot humans to turf.