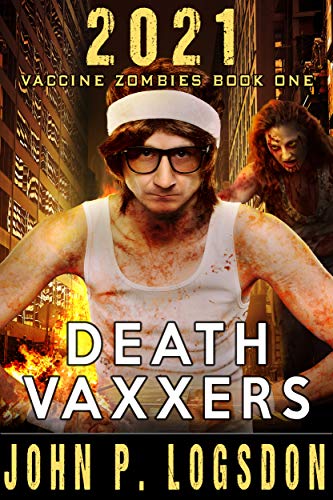 Just when you thought it couldn’t possibly get worse...
Chuck Huey isn't exactly what you'd consider an alpha male, but a few months after getting his Covid-19 vaccination, his world changed.

It all started when Chuck came face to face with a zombie. That was strange enough, obviously, but when she demanded his blood--specifically his blood--the train went completely off the rails.

It turned out the vaccine affected people differently. Most were fine, having no issues at all, but some were cursed with genetic alterations that brought something far worse to the world than the pandemic.

The two major classes of those affected were Death Vaxxers and Vaxx Hunters. Death Vaxxers were powerful, ruthless, and they could think and plan like regular people, only with more sinister intentions. Vaxx Hunters were people who became stronger, faster, and were given an insatiable desire to hunt and kill zombies.

Chuck's blood marked him as a Vaxx Hunter, but not just any Vaxx Hunter. Chuck was the king. His numbers were off the charts.

It'll take more than genetic alterations to allow Chuck to do that, though. He'll have to put the past behind him, embrace the powers he's been given, gather an army of Hunters, and push everyone to work together to eradicate the zombie threat with extreme prejudice.

If Chuck fails...well, the zombies will be nom-nom-nomming on everyone.

If you like post-apocalyptic tales filled with zombies, action, laughs, fun, and snark, you'll love this crazy look into a world of vaccine-induced mayhem!

What readers are saying...
★★★★★ ‘Oh my! What a great read. It was far too easy to visualize this as a movie/short series—which I am now waiting for, thank you so very much!’

★★★★★ ‘A fantastic book, wouldn't it be truly amazing if you could have a jab to turn you into a superhero! A shame about possibly creating villains too though.’

★★★★★ ‘What a fantastic 1st book, makes you want to grab the next one straight away.’

SCROLL BACK UP, GRAB YOUR COPY, AND JUMP ON THE DEATH VAXXER TRAIN TODAY!
Read more