Marina Moore's new Coral Cafe is a Summer Beach favorite of locals and visitors alike. When her sister Kai helps create a Summer Beach performing arts theater, the entire family and community get involved in a new holiday musical production. Join Marina and Kai in casting a new holiday show to celebrate Christmas.

As writer Jack Ventana struggles to adapt to his new role as a single father in the small beach town, his romantic relationship with Marina suffers. Will this holiday bring them together or force them apart? And when an old friend appears in Summer Beach, Marina has more options to consider.

Relax at the Coral Cottage beach house with a group of family and friends you'll love. Coral Holiday is the third novel in the Summer Beach: Coral Cottage series. In ebook, paperback, hardcover, and audiobook.

“[Jan Moran is] is a compelling voice to follow.” - Booklist

"A wonderful story any time of the year. Will make you feel like the sea breeze is streaming through your hair." - Laura Bradbury, Bestselling Author, My Grape Year

"The perfect blend of mystery and romance...the women in Jan's stories are always intelligent and strong. At the core is a strong, close-knit family." - Betty's Reviews 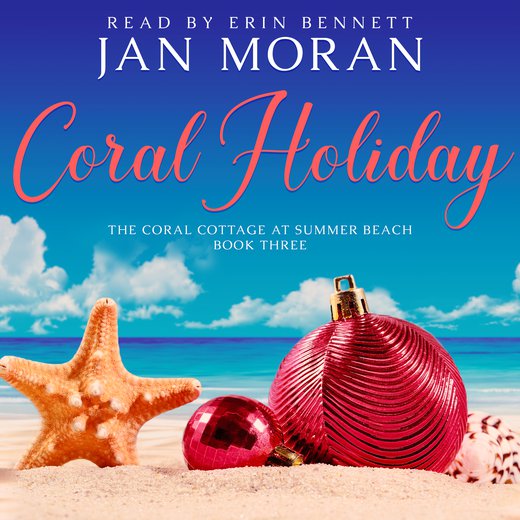 “The new theater production sounds fabulous,” Marina said to her sister as she swept carrot scraps into her compost can in the kitchen of the Coral Cafe. Her grandmother’s garden would thrive with the rich compost.

“You can read the script if you want.” Kai leaned across the counter. With her glittery T-shirt of a surfing Santa Claus, Kai was already in the spirit of the coming holiday season. “What are you making?”

“Carrot cake. Brooke brought a fresh harvest from her garden this morning. I’m adding new autumn and winter dishes to the seasonal menu.” Marina nodded toward a rack in the kitchen. “There are warm cranberry-orange muffins if you want one.”

“Yum,” Kai said, plucking one from a pan. “I have you down for the role of the mother in the play. A young mother,” she added with a wink.

“Thanks for the distinction,” Marina said, smiling. “But I’d rather not be on stage.”

“You’re kidding, right?” Kai turned on Christmas music and sat cross-legged on a bench at the chef’s table, nibbling her muffin. “You were on the air every day for years, so I know it can’t be stage fright.”

“Reading the news before camera operators is hardly the same as performing before a live audience,” Marina said.

Kai and Axe, a local construction contractor, were launching their inaugural theater production at the new Summer Beach Performing Arts Center, which they’d nicknamed the Seashell because of its curved, half-dome shape. Axe had been dreaming of developing the hillside land for an amphitheater for years.

“You performed your role as a news anchor,” Kai said, sweeping her wavy strawberry blond hair into a topknot and poking a pencil from the table through it. “What’s the difference?”

“I wasn’t angling for laughs. You’re the entertainer, not me.” Her sister had been touring with a musical theater group for years before her ex-fiancé had tendered her resignation and she lost her position with the troupe. “Besides, I’m through with that on-air life.”

“It’s just our friends and neighbors.” Kai leaned forward, her elbows resting on her jeans.

“Don’t tell me you’re afraid of them.”

“Petrified.” Marina made a face and pushed up the sleeves on her floral-print chef jacket. Even though the beach had taken on an autumnal chill, it was still warm in the kitchen.

Marina had been baking—and tasting—since early this morning. Cinnamon-dusted churros and blueberry tarts were already going fast with patrons. She might never have her sister’s lean frame again, but Marina was petite, and every morsel lingered on her waistline. Still, she was so happy to be running the cafe she’d dreamed of for so long.

Marina shot her sister a glare to quell her questions. “Who would make the picnic boxes?” This past summer, she’d made take-out boxes for customers to buy during the afternoon shows. Those shows had been to test attendance. People brought blankets to sit on and performers practiced material meant for larger venues. Marina had sold enough boxed sandwiches and sides to make it worthwhile.

“Brooke can serve the food boxes.” Kai poked out her lower lip in a pout. “Come on. I haven’t found anyone else to cast in your part.”

“I’m sure you will. Or write her out of the musical.” Marina slipped off her jacket and fanned her face.

Even though the high summer season had ended, visitors still filled the beach on sunny days. That would diminish during the coming holidays and winter, so Marina couldn’t lose her focus over a holiday production.

She looked up from her work. Kai had gone uncharacteristically quiet. “And stop pouting. That hasn’t worked on me since high school.”

“Ha, that’s what you think.” Kai laughed. “Audition sign-ups start today, and you might lose the part I wrote for you. Besides, it won’t be the same without you.”

“Give it up, Kai. I’m far too busy.” Marina turned away to wipe down the counter.

Just then, a customer with shocking pink hair and a tiny dog in a matching puppy pack waved at them from the patio. Marina nodded back. “Gilda at table number three needs her check.”

“What do I charge for her Chihuahua’s plate?”

“You’re kidding, right? It was only three bites. Besides, Pixie always eats for free here.” Grinning, Marina wound her damp rag and popped it in her sister’s direction. “Get back to work.”

Kai slid off the bench. “You’ll be sorry,” she called over her shoulder as she flounced from the kitchen.

Marina chuckled, but she was determined to stay out of the production, even though her sister had adapted the story from a beloved classic with Axe. She suspected that feelings were developing between them.

As she disinfected and wiped down the countertop, she watched Kai. Her sister hadn’t seemed this happy since she’d won a part in her first touring production. And now, she was writing and planning to direct. To pique everyone’s interest and entice them to attend auditions, Kai had been keeping the actual story a secret.

Tonight was the big unveiling and invitation to sign up for parts. Kai had planned on holding the event at their grandmother’s Coral Cottage. When interest outgrew the venue, she shifted it to the Seabreeze Inn that their friends Ivy and Shelly ran.

Usually, Marina would do anything for Kai. But not this time.

Her reasons were none of Kai’s business—although she did want to see Kai and Axe succeed.

Last spring, when Axe had built the dining patio and renovated the guest cottage on her grandmother Ginger’s beach house, he’d heard Kai singing through an open window.

Kai had worked with Axe all summer on staging and promoting the new outdoor amphitheater. His construction team built a temporary stage that was little more than a platform, and audiences gathered on blankets and folding chairs to listen to local musicians and watch school drama club skits. They had productions during daylight hours because electrical was still being installed. By the end of the summer, the heavy construction began, and Axe and his team built a larger stage with professional lighting.

The first real production would be the holiday special.

Marina wrung out her cleaning rag and tossed it into a hamper destined for the laundry. When she turned around, a little boy barreled into the kitchen, followed by a lanky yellow Labrador with an awkward gait that didn’t slow him down.

“Guess what?” Leo flung his arms around Marina. The ten-year-old was a replica of the man who sauntered behind him, with thick brown hair, a lean frame, and expressive eyes. “Kai asked me to audition for the holiday play. Isn’t that cool?”

“Sure, if that’s what you really want to do,” Marina replied, leaning over to hug him.

The dog wedged its way between them, and they both laughed. Scout wagged his tail, and Marina scrubbed his neck as the playful dog planted a wet kiss on her cheek.

“It would be fun,” Leo said, his eyes sparkling with excitement. “Dad is going to take me to the audition sign-ups today.”

Marina saw the pride in Leo’s eyes as he turned toward Jack. Only recently had Leo learned that Jack was his father. His mother hadn’t told her son or Jack about their brief encounter a decade ago. While Marina respected Vanessa’s decision not to marry, she knew firsthand how difficult it was to raise children on your own. Marina still missed her husband Stan, even though he’d died twenty years ago.

Jack rested his hands on his son’s shoulders. “I didn’t know Leo would be so excited. Kai asked me to invite his friend, Samantha, too.”

“That could be fun for them.” As Marina met Jack’s gaze, her heart quickened at the startling blue eyes that never failed to capture her attention.

Jack shifted on his feet, looking uncomfortable. “Would you, uh, like to join us there?”

“Hey, there’s Samantha,” Leo said, pointing toward his best friend on the beach. “I’ll go tell her.” He took off, and Scout bounded beside him.

“Is that a date?” Marina smiled at Jack and leaned against the counter, waiting for his reply. He had asked her out for dinner in the village earlier in the summer. They’d talked until the restaurant closed and shared a kiss that had warmed her to her core. But he hadn’t made good on his promise to make time for her in his life and go out, which had been his idea. Still, Marina knew he was often occupied with Leo. She lifted her chin. She was busy, too.

Marina raised her brow in anticipation, but Jack was silent. Again. Something her daughter once said popped into her mind. What was the phrase Heather used with her friends when they were in a going-nowhere relationship? He’s not that into you.

“I can do better than that,” Jack said, touching her hand.

Or was he? Lots of mixed messages here, she thought.

“I’m waiting,” she said, teasing him. She slipped her fingers through his, enjoying the warmth of his hand and hoping for a sign from him.

“About that.” Jack looked down at their clasped hands. “Between Ginger’s book and Leo’s school and extracurricular activities, I don’t know where the hours go. I’ve always been a spontaneous kind of guy, so maybe we’ll go out soon.”

“Life is busy,” she said lightly, trying to hide her disappointment. This wasn’t the first time she’d heard that excuse.

The tightness around Jack’s eyes relaxed. “I knew you’d understand.”

She was trying, but she needed more than this. While Jack had awakened the desire to have a real relationship in her life, ...