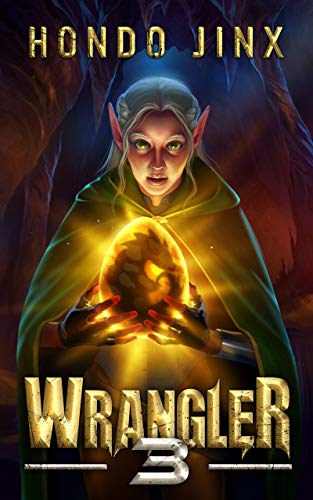 JOURNEY TO THE CENTER OF TARDOON...


When a beloved friend is captured by centaurs, Braddock needs gold... fast. So he and a team of wives, friends, and mercenaries explore the dungeon beneath his home, hunting the Lost Treasure.

But this deadly labyrinth is no mere dungeon.

This is the Dragons' Conundrum, a thousand-year-old test.

Can Braddock become the next Master of Dragons?

Warning: This series contains adult themes, explicit scenes, graphic violence, undefined relationships/harem, and a strong male protagonist with the rough and ready attitude of an American frontiersman. Read at your own risk.

Braddock swept Cleaver upward, blocking the goblin’s attack and shearing his attacker’s blade at the pommel.

The goblin staggered backward, reeling from the forceful block, and Braddock drove a powerful kick into his opponent’s chest, blasting the burly goblin from his feet and pitching him through the air.

The goblin slammed him into the trunk of one of the trees that formed the meadow’s defensive palisade and fell groaning to the ground beside his butchered comrades, whose blood coated Cleaver in hot gore.

Thank you for feeding me, Master, Cleaver purred in his mind. Goblin blood is thin nourishment yet nourishment all the same.

No problem, darlin, he responded.

Seizing the goblin’s ratty tunic, Braddock hauled the dazed humanoid to his feet, gave him a shake, and growled in Goblin, “Why are you here?”

Braddock smacked Cleaver’s pommel into the goblin’s heavy jaw. “You lie, you die.”

The goblin spat blood and bits of broken teeth. He tried to look surly, but looking into Braddock’s eyes and seeing the truth, he sagged, begging, “Have mercy, Meadow Master. We meant no harm.”

“Enough blubbering. Tell me the truth. What were you doing?”

The goblin didn’t deny it.

“Have mercy, Meadow Master. We had no choice.”

Braddock shook the burly little poltroon. “Who sent you?”

“It was…” The goblin hesitated, paralyzed with fear, trapped between death at Braddock’s hands and whatever terrible consequences might result from betraying his employer.

Braddock laid Cleaver against the goblin’s face, and that decided it. Cowards always bend to the most immediate threat.

“We were sent by His Dominance, the Great and Terrible—”

The goblin’s head jerked and froze, pinned to the tree by the arrow now jutting through his forehead.

A second arrow whispered across Braddock’s side, repelled by his magical armor. He reacted quickly, dropping into a crouch. He leapt away at an angle, spinning to face the threat, and another arrow raced through the spot he’d vacated.

Scanning the forest, he caught a flicker of movement. The archer was retreating.

Grinning fiercely, Braddock charged after the fleeing figure, thinking, You’re going to tell me what I want to know. The Great and Terrible who?

But a second later, as Braddock was closing the gap, a white flash streaked out of the sky, struck the goblin, and tore his ugly head from his shoulders.

Frustrated, Braddock marched the rest of the way to the headless corpse.

Smiling proudly and clearly pregnant now, Shrike hovered overhead holding the decapitated head out to him in her talon. In her hands, she held the heads of half a dozen additional goblins.

They are all dead, Man. Shrike killed them like scampering field mice.

Braddock was frustrated. He had wanted to interrogate this last goblin. But Shrike had acted logically, neutralizing the threat, and the last thing he wanted to do was make this deadly bird woman start questioning herself. She knew these woods and its creatures even better than he did and excelled like none other at dealing death.

And that made her a beautiful asset.

Thank you, darlin. I got plans for those heads.

Yours. Do with them what you will.

Thank you, Man. Her bloody beak spread in what he knew would have been a smile had she been wearing her other, human-like face.

Man is generous. Shrike will feed. Goblin flesh is sour, but the daughter of Man and Shrike must grow on the flesh of the forest. How else will she rule the wilderness?

Darlin, I’d like to see something try to stop her.

Shrike shivered with pleasure at his confidence in their offspring, and shivered again when he tugged her feathery legs, pulled her down, and planted a soft kiss on her swollen belly.

A fierce little kick answered from within.

Braddock laughed, making a show of rubbing his jaw. She packs a punch.

What will you call her?

Shrike hugged her belly. I will call her Baby.

Of course. That is what she will be. Our baby.

Might be a funny name when she gets older, don’t you reckon?

Shrike narrowed her eyes, as if trying to see if Braddock was joking. Her own jokes had grown slightly more nuanced from her days of simply startling would-be prey for laughs, but she still had a way to go.

When she begins to hunt alone, we will no longer call her Baby.

All right. What will we call her then?

Again, she squinted at him. Is Man poking fun at Shrike?

No. I just want to know what we’re going to call our daughter once she’s grown.

Braddock scratched his head, the hair sticking to his bloody hands. Won’t that be a tad bit confusing? I mean, you are Shrike.

Shrike threw back her head and clacked her beak loudly, a thing he had come to recognize as restrained laughter in her huntress form. Man, you amuse Shrike. Yes, Shrike will remain Shrike. Our daughter will also be Shrike. We will both be Shrike. It is what we are. Where is the confusion?

Braddock shook his head. He would never understand women. And that went double for bird women. But he had learned to surrender certain decisions to them. And the naming of young fit firmly in that category. Sounds good, darlin. Shrike it is. Now let me see those heads.

Shrike handed him her gruesome payload.

Much obliged, he told her.

Good. I can’t wait to meet her, darlin.

Shrike looked sad. And indeed, her telepathic voice sounded uncharacteristically maudlin. Do you know what Shrike must do when Baby arrives?

Philia said you need to take Baby away to be alone for a bit.

Shrike nodded, her eyes full of sorrow. Shrike must take Baby away to a lonely place and subject her to hardship. Shrike will feed and protect Baby for one moon, until Baby makes her first kill. Then Shrike will abandon Baby in the wilderness.

Braddock felt a surge of protectiveness for his unborn child. Now, hold on just a second there, darlin. What do you mean, abandon her?

It must be done, Man.

I forbid it. No daughter of mine is going to be left to fend for herself out in the forest, let alone at one month of age.

Shrike settled to the ground before him and pulled up to her full height, glaring at him with flaming eyes. What does Man know of raising a newborn shrike?

Say no more. Man has already spoken the truth. Man knows nothing about raising newborn shrikes. Baby must fend for herself or die.

I won’t let her die.

Man does not understand. If Baby does not survive the test of abandonment, Baby will grow weak and die within one moon. It is the way of all shrikes: rule or die.

Just like that, in a bolt of common sense, Braddock believed her.

All right, darlin. It twisted his guts to say the words, but he said them anyway. You do what you gotta do.

He wanted to ask her what their daughter’s chances were but didn’t want to bruise his steady confidence, so he simply nodded. Our daughter will rule the wilderness.

Shrike embraced him fiercely, her beak melting into her other face and its otherworldly beauty, and they made love on the forest floor among the scattered remains of the dead.

Shrike was unusually tender and needy. Braddock was patient with her, savoring the emotion between them and feeling a bit maudlin himself. When the time for her isolation came, he would miss this magnificent woman dearly.

When they finished, Shrike confessed that she dreaded the long separation.

Shrike’s heart will be torn in two with missing Man.

I’ll miss you, too, darlin. And Baby. But then it will be over, just like my trip to Black Harbor.

This will be an even longer separation, the bird woman pouted.

He held her a little longer then planted a kiss on her feathery forehead. You’ll be all right, darlin. Now, let’s get a move on. We got a full day ahead of us.

Shrike nodded, collected herself, and went about her business, impaling goblin torsos on nearby branches twenty feet off the ground.

Braddock used his tomahawk to free any heads still attached to bodies. Then he trimmed branches, whittled the ends, and used them to impale the heads at eye level.

The eye level of goblins, that is.

Finally, as Shrike disappeared deeper into the forest, carrying the last corpse, Braddock dipped a stick in goblin blood and wrote a simple message in Goblin upon one of their crude wooden shields, which he then propped up among the stakes.

SPIES, he wrote. PAID IN FULL.

Then he spoke the magical words that parted the palisade and immediately glimpsed a scene of great prosperity. Thanks to Binti, herds of deer, sheep, goats, pigs, and sheep dotted the meadow.

Automatically glancing skyward for signs of the giant roc, he whistled for the buckskin, who came trotting out from under the trees. Braddock mounted up and started for the dark square of the intake camp’s palisade within the palisade.

In the far distance, he could just make out the sprawl of new buildings clustered at the heart of the meadow. Thin lines of smoke rose from their chimneys, and the surrounding fields twinkled with Cascadia’s irrigation system.

Somewhere to the left, Doal, newly emerged from his long hibernation, would be helping the halflings to excavate their village.

With the warming weather, word of Wrangler City was spreading across the wilderness. Newcomers showed up practically every day. The population had tripled since he killed the hag.

“Good morning, Meadow Master!” the guards, a pair of half-elves with bows, called from atop the towers of the intake camp. The gate swung open, and Jed rode into the compound.

Immediately, he heard shouting coming from one of the holding tanks on the far side. “I demand to see the Meadow Master now!”

It was a woman’s voice, loud, fierce, and very, very angry.

Caitlin emerged from her office, an uncertain smile on her pretty face. As always, she looked fit and beautiful in her spider-silk jumpsuit. A short sword hung at her side. And since Jed and the Earthwoman trained daily, she knew how to use it. “Hey, Jed. We have a new arrival. She’s being… difficult.”

Braddock shifted his eyes toward the shouting.

“Do you have any idea who I am?” the unseen woman shouted.

He spat in the dust. Well, this would be a first. So far, he had invited every refugee to join Wrangler City. “I knew we’d have to send somebody packing eventually. Sounds like today’s the day.”

Caitlin nodded, but her expression remained uncertain. “Could be. But Jed. She’s not like the others.”