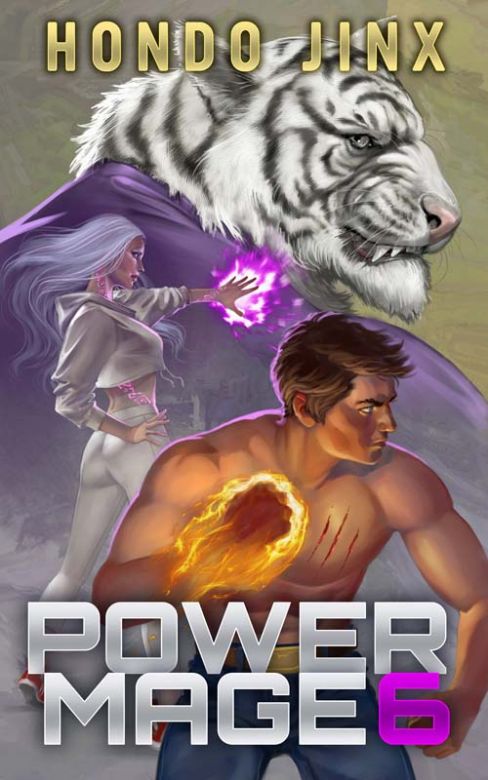 THE SEVENTH STRAND. THE ULITIMATE TRUTH. THE FINAL BATTLE.


After the Chop Shop bloodbath, Brawley goes full power mage and vows to destroy his enemies.

The end is here.

Who will become Brawley’s seventh wife? What arcane secrets reside within The Tome of Seven Strands? What sinister truth lurks behind Janusian’s Super Lattice? Could Brawley be more than a power mage?

This epic series finale answers all questions, settles all scores, and pits Brawley against the Tiger Mage in the ultimate battle: power mage versus power mage in a duel to the death… and beyond.

Warning: This explosive series contains explicit scenes, graphic violence, a harem of gorgeous women who wreak serious havoc with their minds, and a West Texas bull rider who’s tougher than a nickel steak.

“Get to the RV,” Brawley commanded. “Tighten the cloaker’s radius and crank it hard. Nobody shoot unless I do. It’s the damn Tiger Mage!”

With the roar still thundering across the night sky, the Scars sprinted across the devastation.

Stokely de Sade popped to her feet and swept her fingertips across Brawley’s blood-soaked abdomen.

Across the ghostly pale sweep of her alluring near nakedness, welts rose in glowing pink symbols. Fighting back a shudder, the blood scribe said, “I’ll open a gate within the cloak.”

Brawley nodded and started across the parking lot.

“Brawley!” his wives called after him.

“Stay inside the cloak,” he called over his shoulder, and didn’t bother to look back. He knew his wives would listen. “Stokely opens that gate, y’all get out of here. I got this.”

Another bolt of purple lightning split the sky.

Stark naked, Brawley sprinted away from his cloaked friends with superhuman speed. He leaped over bodies and ran barefoot over the devastation of the Chop Shop parking lot.

The recent kill boost had poured eighteen points into each of his depleted strands. His Carnal strand went to work now, protecting his flesh as broken glass crunched beneath his hardened soles.

Overhead, a shimmering ring of white light formed, and another monstrous roar shook the world.

Brawley ducked through the shattered front of the Chop Shop.

He wanted his boots, jeans, and guns. The Peacemaker was a family heirloom, and he’d taken a liking to the AA-12.

But he didn’t reckon they’d do much good against the Tiger Mage, and he wasn’t risking his life for these possessions.

He needed his gold buckle. Otherwise, the bull riding world championship buckle would be one hell of a calling card to leave behind in this mother of all crime scenes.

That would bring down serious heat on the ranch.

Mainly, though, he needed the thing he had left in the pocket of his bloody jeans.

He rolled up the jeans and stuffed them into a boot then fastened his gun belt, grabbed the AA-12, and peeked over the rubble, cloaking hard.

A black-and-white missile wrapped in fluttering purple pounded down out of the sky and landed in a three-point stance at the center of the smoking parking lot.

Crouched among the dead, the Tiger Mage scanned the scene, his gray irises shining darkly within his luminous eyes like wet stones in a hot furnace.

The Tiger Mage stood slowly, rising up and up until he towered ten feet in the air, his broad shoulders draped in fluttering purple robe cloth.

But Brawley didn’t want to hide.

The Tiger Mage had murdered his parents; killed Tessa, Yolanda, and a hundred Scars; and slaughtered thousands of innocent people.

Now the black-striped son of a bitch meant to kill Brawley and his women.

But the Tiger Mage’s psi score hit him like a bucket of ice water.

The Tiger Mage had opened all seven strands for a shocking total psi score of 5824.

What could Brawley hope to do against that kind of power?

Nothing. Not a damn thing.

The Tiger Mage’s score was four times higher than his.

Even if Brawley spliced his strongest strands, it wouldn’t be enough.

The Tiger Mage no doubt had a powerful shield. Assuming anything less of his opponent would be foolish to a suicidal degree.

So rather than preparing an attack, Brawley turned his attention to the mobile cloaker protecting his people.

Frankie had flooded the cloaker with extra Gearhead force and tightened the radius of effect, creating a smaller, stronger dome of concealment that barely enveloped Brawley’s people. They stood with weapons at the ready, not fifty yards from the growling Tiger Mage, who so far remained oblivious to their presence.

At the front of the group, Callie and Remi had their weapons trained on the Tiger Mage. Brawley wished he could reach them telepathically, but they were shielded.

Brawley pumped Seeker juice straight into the cloaker, further strengthening the illusion. Within its murky interior, a mouth of pink energy was opening.

The Tiger Mage roared and whipped his massive head around.

Had he sensed the portal opening?

Brawley caressed the trigger of the AA-12, ready to blast the son of a bitch, shield be damned. It might not hurt the Tiger Mage. But it would draw attention away from Brawley’s people.

Get them out of here, he commanded.

Boss? she responded, sounding surprised to find him in her thoughts.

Yeah, it’s me, darlin. Get everybody through the damn portal.

Your women refuse to leave you.

Tell them I said to get their asses through that portal, pronto. I’ll catch up with y’all in Texas.

All right. Don’t get yourself killed, boss. We have unfinished business.

Even now, even with the Tiger Mage prowling between them, Stokely’s desire for Brawley radiated from her thoughts like heat waves shimmering above summertime macadam.

You get my people to safety, he told her, you can have whatever you want, darlin.

Deal, Stokely thought with a rush of excitement, and turned her attention to the others.

Brawley saw movement within the cloak as Stokely drove his people into the pink portal.

But the Tiger Mage was moving in that direction now and sniffing the air.

Which made no damn sense. The powerful cloak should block everything, including smells.

Brawley drew his eighteen remaining points of telekinetic power, grabbed his stuff, and hustled along the rubble looking to cut an angle of fire that wouldn’t endanger his own people.

Within the cloak, motorcycles disappeared into the portal, dragging the RV after them.

The Tiger Mage rushed forward with a loud roar.

Brawley was just about to attack when the Tiger Mage bellowed, “Danica!”

Five feet from the cloak’s edge, the Tiger Mage fell to his knees and lifted the messy remains of Danica “The Dragon” McLeod into his arms.

He clutched the shattered corpse to his chest, growling, “No no no no no,” then threw back his huge head and wailed.

It was a terrible sound, full of dismay and loss and agony.

That’s when Brawley understood. The Tiger Mage had loved the Dragon. Which explained how he had so deftly anticipated the Order’s moves.

Within the cloak, a solitary figure remained. Brawley could make out only a vague impression of her. But vague was enough. He recognized her long, pale torso and the halo of silver hair hovering about her head.

Finding her mind, he was irritated to discover that Stokely’s thoughts were filled with laughter. Her crazy ass was having fun, digging the edge, getting off on the danger, the deadly Tiger Mage five feet away howling for revenge.

Get your skinny ass through that portal now, Brawley told her.

Will do, boss, Stokely chuckled. Then her mind-voice downshifted into a velvety purr. You owe me. Anything I want. And what I want is—

Go, Brawley commanded, and this time he flooded the order with juice.

Stokely jumped through the pink ring with a peal of laughter, and the portal winked out of existence.

Which freed Brawley to leave. Which in turn invited a last look.

They had rescued Winnie, but he couldn’t call this mission a success. A hundred Scars lay dead out there.

To the south, another hundred Scars lay dead alongside Tessa and Yolanda, killed by purple lightning.

The Tiger Mage jumped to his feet, still clutching the bloody remains to his chest. “I will avenge you,” he sobbed. “I will kill all of them!”

The Tiger Mage blasted lightning in all directions, and the night exploded in a blinding flash of bright white light shot through with purple.

Brawley sprawled. Above him, the air sizzled, bright as a welder’s torch and crackling wickedly.

With his hair standing on end, Brawley rapidly recited the words inscribed upon the key he had risked everything to regain.

And the electrified world vanished in a mass of swirling clouds.