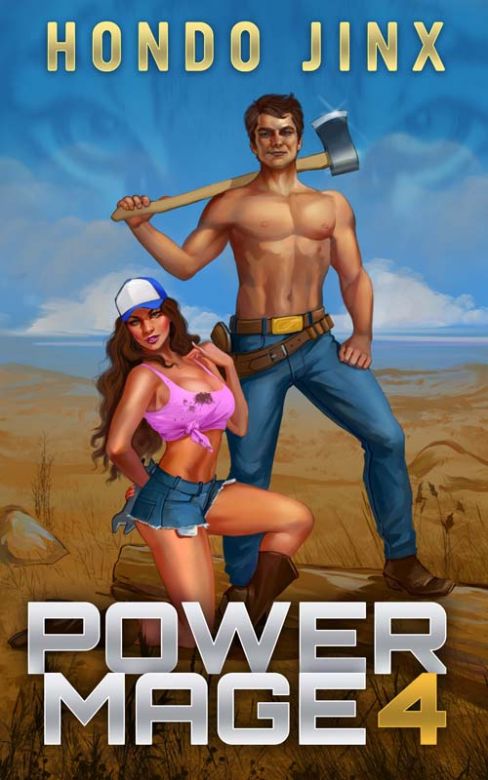 Deep in the heart of Texas, Brawley vows to build a base, explore Red Haven, and protect his women.

He needs to work hard, crack strands, and avoid the attention of those hunting him. And oh yeah, his family and friends want to know why he’s shacking up with five gorgeous women and stockpiling a mountain of ammo. Meanwhile, his newly released Beast just wants to teach all enemies a lesson they’ll never forget…

But how can Brawley succeed when psionic outlaws seize neighboring ranches, threatening to kick off a bloody range war?

Warning: Power Mage is an explosive series containing graphic violence, explicit scenes, and a harem of gorgeous women who wreak serious havoc with their minds. Read at your own risk.

Without a word, six men armed with stubby bullpup rifles rose from the roadside brush and jogged toward the RV. They moved smoothly, a compact unit with a professional and lethal manner.

On the hazy eastern horizon, the morning sun burned like a huge, fiery eye.

The men hurried without excitement. Their weather-beaten faces showed only alertness. Beneath their body armor, the men were lean and hard, built more like endurance athletes than powerlifters. Their steely, close-set eyes were narrowed, a habit from decades spent fighting in the world’s harshest deserts.

A seventh man rose unarmed from the scrub and stumbled after them. His name was Davis Beecham, and he did not want to be here. But Beecham was, like so many people who find themselves in places they don’t want to be, all out of options.

“Wait,” Beecham called after the men in a strangled whisper. His eyes bulged from his red, sweat-streaked face. “I have a really bad feeling about this.”

The men ignored him.

Fifty yards from the Winnebago, four of the mercenaries angled toward the roadside ravine into which the targets—a man and four women, all naked—had plunged.

Moving with robotic precision, the remaining pair of mercenaries raised their weapons and approached the vehicle. The passenger door hung open, rocking gently in the morning breeze.

Beecham paused, full of panic. He swiveled his gaze back and forth between the two groups.

The pair investigating the RV disappeared inside.

Beecham groaned, filled with a clanging certainty now. This was bad, bad, bad.

As the other four mercenaries reached the edge of the ravine, Beecham groaned again. Only this time, the groan had nothing to do with his squawking danger sense and everything to do with the same old urges that had driven him from bad decision to bad decision, ultimately leading him to the place of reckoning.

He had always yearned for beautiful women. But he lacked the courage, confidence, and charisma necessary to attract those women. Which was pure madness, since he was a decent Seeker. But if he didn’t believe the pseudo-truths he was spouting, women never would.

Hence strippers. And cocaine. And the long chain of bad choices and unfortunate circumstances that now littered his wake, as glittering and sordid as a trail of discarded rhinestone G-strings.

The naked woman rising from the ravine put every woman Beecham had ever ogled to shame. She outshone every stripper. Every high-priced call girl. Every nervous, well-scrubbed virgin Beecham had purchased in poverty-stricken shitholes around the world.

This woman was calling back into the ravine and didn’t see the mercenaries approaching.

Beecham froze in place, paralyzed by her perfection.

Then the quartet of killers opened up on her, firing short, controlled bursts.

The woman cried out. Her lovely body jerked. Divots of flesh leapt away riding geysers of blood. She collapsed, obviously dead, and tumbled away into the ravine.

The men charged into the gulley. Half a second later, gunfire erupted.

A terrible sound—half snort, half bellow, skewered by a sharp, piping note of pure rage—drowned out the gunfire.

The animalistic cry of rage shattered Beecham’s resolve, conjuring from his very marrow an ancient terror that harkened back through the ages to lost epochs when distant ancestors had huddled around midnight campfires, wisely fearing the beasts hunting the darkness.

Beecham deserted his team. “Tried to tell them,” he gasped, sprinting away.

Behind him, a horrific cacophony of sounds rose from the ravine. Gunfire. Screams. And savage, animalistic rage.

“They wouldn’t listen,” Beecham whimpered, reaching the nondescript van. He threw open the door, clambered into the driver’s seat, and pulled down the visor.

Beecham made a grab and missed. Bending over, he saw someone fly out of the ravine. The figure slammed into the berm and lay still and misshapen like roadkill.

Beecham’s internal alarms shrieked madly. He cried out and scooped the keys from the floor.

Sitting up, he heard the deep rumble of an approaching engine.

Which made no sense. The road was blocked.

Glancing into the rearview mirror, he saw a big motorcycle approaching.

It was the buxom beauty, the green-eyed brunette with the round ass, returning.

With shaking hands, Beecham jabbed the keys at the ignition. In his terror, he fumbled the keys and dropped them again.

He retrieved them as the motorcycle drew up behind him. His eyes flicked to the rearview, and he groaned, struck by the woman’s beauty as she rose from the Harley, pulling something from a saddlebag.

“No,” he cried, seeing the large wrench.

Moving with desperate speed, he shoved the keys home and twisted them with a thrill of triumph. The engine growled to life.

He dropped the transmission into drive.

And the engine cut off.

He twisted the keys again. Nothing.

Frantically, Beecham pumped pedals and checked the transmission and twisted the keys over and over.

The engine was dead.

Beecham cried out, turning from the spray of shattered glass.

He opened his eyes and turned back around just in time to see the dark blur of the onrushing wrench.

His sweaty head jerked backward, filled with pain and sparks of bright light. For a second, his consciousness winked.

When he came to, he was being dragged from the vehicle.

A kick rolled him onto his back.

“Who are you?” the beautiful woman demanded, her green eyes flashing wildly as she cranked the wrench back over her shoulder. “What have you done?”

Beecham was still rocked from the first blow and jacked up on the adrenaline, cortisol, and lactic acid flooding his body. His survival instincts were kicking in as they had in so many tight situations over the years.

He had to stop her. Had to pull it together and mold her perception.

He smiled up at the green-eyed beauty as if she hadn’t just leveled him and WWIII wasn’t raging a hundred yards down the road. “Hi,” Beecham said, releasing a torrent of juice. “It’s great to see you. I—”

But he cut off, stunned by the sight of the raging nightmare beast that shot out of the ravine like a demon from hell.

Then the woman’s remarkably beautiful mouth twisted into a snarl, and she swung the wrench again.