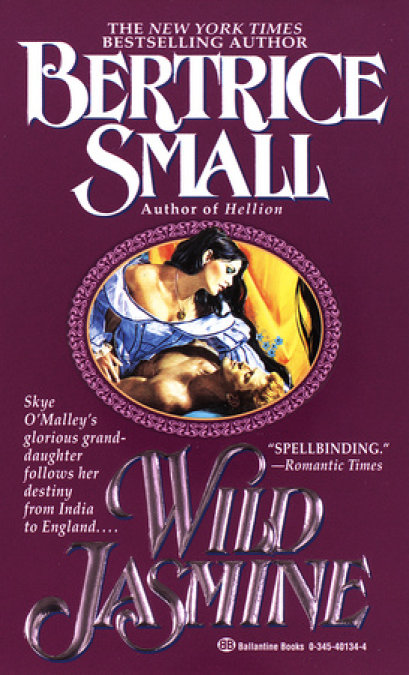 From the palaces of pashas in seventeenth-century India to the scandalous court of James Stuart of England, one woman struggles against fate to find true love . . .

Princess Yasaman has been blessed with rapturous beauty, fierce intelligence, and an innocent sensuality that captivates two formidable men—her scheming half-brother, Salim, and her loving husband, Prince Jamal. But her days of bliss and nights of steamy passion are shattered when Jamal is murdered, and Yasaman flees to England and the court of James I. Calling herself Jasmine, she is reunited with her beautiful mother, Velvet, and her grandmother, the legendary Skye O'Malley de Marisco.

Before long, Jasmine is caught up in the tangled intrigues of the court of the Stuart king, James I, where she is admired by the most powerful men in England: Rowan Lindley, Marquess of Westleigh, her good-natured second husband; the Earl of Glenkirk, who tempts her with forbidden passion; and hot-blooded Henry Stuart, prince of England. It is here that she truly becomes Wild Jasmine, a woman who lives and loves with fierce abandon and who surrenders to the deepest pleasures of love . . . A giggle, with a distinctly mischievous ring to it, came from somewhere near the tall orchid trees that soared gracefully into the late spring afternoon.

“My princess! Where are you?” The head eunuch of Yasaman Kama Begum’s household staff moved anxiously through the Grand Mughal’s gardens. “Where has that imp of Azrael gotten to?” he muttered crankily to himself. He stopped to listen, but only the noisy chatter of birds met his sharp ears.

“Adali! Have you found Yasaman yet?” Rugaiya Begum called to him impatiently from an open balcony in the princess’s palace.

“Nay, my lady, but I will,” the eunuch answered. Then he heard the giggle of the child again. His brown eyes grew crafty, and he said in a wheedling tone, “I hear you, my princess. Come to Adali and he will give you your favorite sweetmeats.” The air about him was silent again but for the birds.

“Mariam Makani will soon be here, Adali.” Rugaiya Begum was beginning to sound anxious. She now stood upon a colonnaded porch that opened directly into the gardens. Yasaman’s grandmother was the highest-ranking lady in the kingdom. One did not keep her waiting when she chose to visit. Rugaiya Begum sighed deeply. Yasaman was such a mischievous child, but why oh why had she chosen today to tease them all?

“Grandmother is coming here? Today? I did not know,” the prince replied. “No, she is not with me, but what is it that troubles you so?”

“Mariam Makani is due at any moment,” Rugaiya Begum said, “and your little sister has taken this moment to play one of her games. Adali cannot find her. She is hiding in the gardens from us and she will not come out!”

Prince Salim chuckled indulgently. “I will ferret her out,” he said, and moved down the steps from the colonnaded porch into the garden. “Yasaman, my little sweetmeat, where are you?” he called in dulcet tones.

“Salim? Is it you?” his sister’s voice called back.

“It is I, my adorable one. Come out! Our grandmother is coming to visit at any time now. You know how she dislikes being kept waiting.” His dark eyes scanned the greenery before him, seeking for some movement that would betray the child.

“You must find me!” she teased him wickedly.

He laughed. He had never imagined when this youngest child of his father’s had been born six years ago that he, a grown man even then, could be overwhelmingly enchanted by so small a human being. His own children had never appealed to him so; but he adored this baby half sister of his. “Very well, you naughty monkey, I shall find you, and when I do, I shall spank your little bottom for this lack of respect,” the prince threatened.

Salim glanced back at his aunt and saw that she was looking even more frantic. The time for subtlety was obviously over. Carefully, he looked about the garden, seeking some small thing out of place, and then he saw it—a small scrap of red gauze amid the Crown Imperials. Softly he crept toward the spot, and then, with a noisy cry, he swooped down to capture his crouching prey. With a shriek of surprise she squirmed from his grasp, black hair flying, and dashed past him, but Salim was quicker. Catching his little sister once again, he lifted her up and carried her kicking and raging to where Rugaiya Begum awaited. A firm but loving smack upon her small posterior silenced her temporarily.

“Here is your daughter, Aunt,” Salim said. He set the child upon her bare feet, but kept a firm hand upon her head.

“Thank you, Salim,” Rugaiya Begum said. “Will you stay and have refreshments with us when your grandmother arrives? She will count it a great bonus to see you too.”

“I thank you for your invitation, Aunt. Yes, I will stay,” he replied.

“How did you find me when Adali could not?” Yasaman demanded, looking up at her adored eldest brother, her startling turquoise-blue eyes curious.

“I looked carefully about the garden, my little monkey, and saw the edge of your skirt,” he told her with a superior smile. “There it was fluttering bright and scarlet amongst the yellow Crown Imperials.”

“Adali’s eyes are not as sharp as yours, my brother,” Yasaman noted as the eunuch came noisily puffing up to them.

“I will deliver her to Toramalli and Rohana to be prepared,” Adali said to Rugaiya Begum, taking Yasaman’s little hand in his. “You have been most naughty, my princess,” he scolded his little mistress as he led her into the palace.

“It is not fun always being good, Adali,” she answered him.

Her honesty brought a smile to the faces of both Rugaiya Begum and Prince Salim.

“She has brought you much joy, hasn’t she, Aunt?” the young man said.

“She is the child of my heart, even if I did not bear her,” Rugaiya Begum said quietly. “I wonder if Candra thinks often of her.”

“Perhaps she does,” the prince said. He had not known his father’s young English wife particularly well. She had been with them so short a time. “Then again,” Salim said, “perhaps she does not think of Yasaman at all. She was, after all, returned to another husband. Surely she has had other children. Those children and their care would possibly take her mind from Yasaman.”

“How could a woman forget her first child?” Rugaiya said indignantly. “I do not believe that Candra has ever forgotten her daughter! She was not that kind of woman.”

The prince shrugged. “In the almost six years since she has been gone, has she ever once written a letter to inquire of the child’s well-being, Aunt?”

“It was agreed that she would not,” Rugaiya said quietly. “It would be far too painful for her.”

Again Salim shrugged. “My father was right to retain custody of Yasaman. Here she is safe and beloved of all who know her. It would not have been so in that foreign land.”

“You cannot know that for certain,” Rugaiya Begum said, some instinct deep within her wanting to defend the other half of her daughter’s heritage. Though separated by many years, Candra had been her friend.

Before the prince might reply, a servant arrived to tell Rugaiya Begum, “The queen mother’s procession approaches, gracious lady.”

“Send for the princess Yasaman,” she told the servant. “She must be here to greet Mariam Makani.”

“It has already been done, gracious lady,” the servant replied a trifle smugly.

“Your diligence and foresight are to be commended, Ali,” Rugaiya Begum said dryly, dismissing the servant.

“Mama Begum! Mama Begum!” Yasaman danced out onto the portico. Her scarlet skirt had been changed for one of turquoise-blue silk gauze with large gold coin-shaped dots.

The hem of the skirt was edged in a two-inch band of gold. Her short-sleeved half blouse was made of cloth-of-gold and had a modest little round neckline that seemed to be at war with the wide area of bare skin between the bottom of the blouse and the waistband of her skirt. On the child’s narrow and elegant little feet were slippers that matched her skirt. Her ebony hair was pulled back from her face and fashioned into a single long braid that had been woven with pearls and hung down her back. Yasaman wore a small necklace of pink diamonds, and there were pink diamond studs in her tiny earlobes. Her unique blue eyes had been outlined in kohl, rendering them even more brilliant.

“Mama Begum!” Yasaman said insistently a third time, and having gained Rugaiya Begum’s attention, she smiled winningly. Placing the palms of her hands together, she bowed her head prettily, then looking up, asked, “Do you think the old queen, my grandmother, will be pleased with me?”

“Yes, I do,” Rugaiya Begum assured the child, “but you must not call Mariam Makani the ‘old queen,’ my little one. Your grandmother is a great lady in this land.”

“Should her eyes be outlined so with kohl, Aunt?” Salim suddenly demanded. The effect, he thought, seemed to make Yasaman appear older than her six years. For the first time he saw a small glimpse of a woman within his youngest sister. It was a startling revelation.

“It is a special occasion, Salim,” Rugaiya Begum said with a smile.

“I do not know if I like it,” he replied. “It makes her look like a Nautch girl.”

“What is a Nautch girl?” demanded Yasaman.

“A pretty dancing girl,” her mother quickly replied, “but you are a princess, not a dancing girl. Salim! Apologize to your sister at once!” Rugaiya Begum’s dark eyes flashed angrily at her husband’s eldest son and heir. A Nautch girl was indeed a dancing girl, but she was also more often than not a prostitute as well. That Salim would use such language around his sister distressed Rugaiya Begum.

“I do apologize, Aunt, for I did not mean to offend. I sought for a word to describe my displeasure with Yasaman’s appearance. I should have said I thought the kohl about her eyes too sophisticated for a little girl of six.” The prince took Rugaiya Begum’s hands in his and touched his head to them in a gesture of obeisance.

“I am six and a half!” Yasaman said sharply to her brother, and the look on her face was so like Akbar’s that both Salim and Rugaiya Begum could not restrain their laughter.