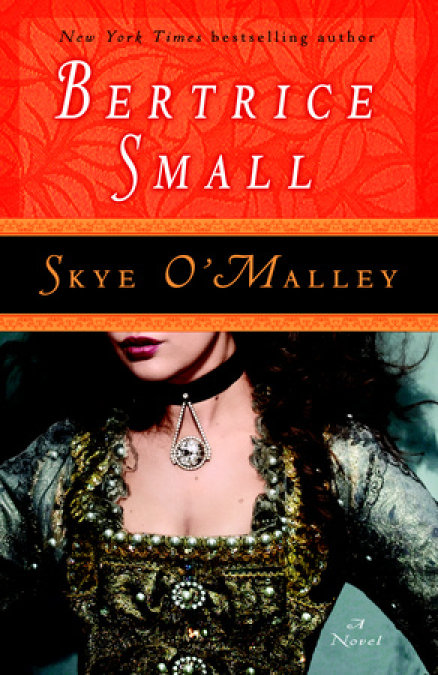 From the incomparable New York Times bestselling author Bertrice Small comes a heroine as breathtaking as she is legendary.

Indomitable and bold in an era of royalty and rogues, Skye O'Malley is a woman who embraces her unbridled sensuality as valiantly as she fights for her children, her lovers, her empire. A woman of justice and honor, she will match wits with and challenge the most dangerous and powerful woman of her time: Queen Elizabeth I.

Though Skye is the object of every man's fantasy, only a handful have had the thrill of tasting her enticing passions–men whose own daring adventures match her exotic forays into a world of lust, longing, and remarkable destiny. Skye's is a stunning tale that reaches from the emerald hills of Ireland to the lush palaces of Algiers to the helm of a shipping empire, where she will wage her greatest battle for love and vengeance against the crown itself. 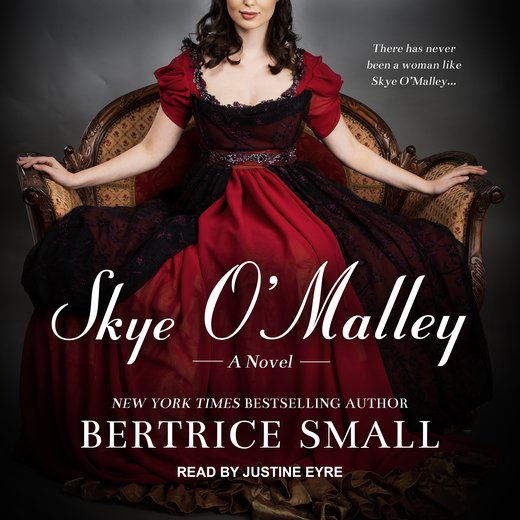 Chapter 1
It was a perfect early summer day in the year 1555. Innisfana Island, its great green cliffs tumbling into the deep and sparkling blue sea, shone clear at the mouth of O’Malley Bay. English weather, the Irish inhabitants of the region called it, and it was nearly the only English thing they approved of. There was a slight breeze, and in the skies above the island the gulls and terns soared and swooped, their eerie skrees the only counterpoint to the breaking surf.

Standing tall against the horizon was O’Malley Castle, a typical tower house of dark gray stone. Rising several stories high, it commanded a view of the sea from all its windows. It had a wide moat, and beyond that moat was—of all things—a rose garden, planted by the late Lady O’Malley. After her death, now four years past, the new Lady O’Malley kept the garden up. Now in full bloom, it was a riot of yellows, pinks, reds, and whites, a perfect background for the wedding of the youngest daughter.

Inside the tower house, in the main hall, the five older daughters of the O’Malley family sat happily gossiping with their pretty stepmother while they sewed and embroidered the bride’s trousseau. It had been a long time since they had all been together. Now, each had her own home, and they all met only on special occasions.

They were as similar now as they had been as children. Medium-tall, they all ran to partridge plump. It was the kind of comfortable figure that kept a man warm on a cold night. Each was fair-skinned with soft peach-colored cheeks, serious gray eyes, and long, straight, light-brown hair. None was beautiful, but none was ugly, either.

The eldest, Moire, was twenty-five, and had been married for twelve years. She was mother to nine living children, seven sons. Moire stood high in her father’s favor. Peigi, at twenty-three, had been married ten years and was mother to nine sons. Peigi stood even higher in her father’s favor. Bride, twenty-one, had been married eight years, and had only four children, two of whom were boys. Dubhdara tolerated Bride, and constantly exhorted her to greater productivity. “You’re more like your mother than the others,” he would say ominously.

Eibhlin, eighteen, was the only one with a religious calling. She had been such a quiet little thing that they hadn’t even suspected her piety until the boy to whom she was to be wed succumbed to an attack of measles the year Eibhlin was twelve. As O’Malley considered a possible replacement bridegroom for his fourth daughter, Eibhlin begged to be allowed to enter a convent. She genuinely desired that life. Because her uncle Seamus, now bishop of Murrisk, was present for the talk, Dubhdara O’Malley was forced to give his consent. Eibhlin entered her convent at thirteen, and had just recently taken final vows.

Sine O’Malley Butler was sixteen, wed three years, and the mother of one boy. She was eight months pregnant but she would not have missed Skye’s wedding.

The married sisters were dressed in simply cut, full-skirted silk dresses with bell sleeves and low, scooped necklines. Moire was in a deep, rich blue, Peigi in scarlet, Bride in violet, and Sine in golden yellow. The lacy frill of their chemises peeked elegantly up through the low bodices.

Eibhlin struck the only somber note. Her all-covering black linen gown was relieved only by a severe white starched rectangular bib, in which was centered an ebony, silver-banded crucifix. About her waist the nun wore a twisted silk rope, also black, which hung in two plaits to the hem of her gown. One plait, knotted into three knots, symbolized the Trinity. The other, knotted in the same manner, symbolized the estates of poverty, chastity, and obedience. By way of vivid contrast, her sisters wore chains of wrought gold or silver about their waists, and each woman had attached to her chain a rosary, a needlecase, a mirror, or simply a set of household keys.

Because this was an informal home gathering, the married sisters wore their hair loose, parted in the center. Sine and Peigi had added pretty arched linen caps. And of course Eibhlin, whose hair had been cut when she took her vows, wore starched and pleated white wings over her white wimple.

Presiding over this gathering was Dubhdara O’Malley’s second wife. Anne was the same age as her stepdaughter, Eibhlin, and as pregnant with her fourth child as was her stepdaughter, Sine. Anne was a pretty woman, with chestnut-brown curls, merry brown eyes, and a sweet, sensible nature. Anne’s silk gown was of a deep wine shade, and fashioned identically to her stepdaughters’ gowns. But over her ruffled bodice Anne wore a double strand of creamy baroque pearls. None of the O’Malley daughters had resented their father’s marriage to Anne and everyone liked her enormously. One could not help liking Anne.

For nine years after Skye’s birth Dubhdara O’Malley had obeyed his priest brother’s edict, and stayed out of his wife’s bed. He really did not wish to kill Peigi. Free of yearly pregnancies, Peigi regained her strength and even began to bloom. Then, one night, Dubhdara O’Malley had arrived home from a long voyage. It was late. He had no current mistress, and there wasn’t a servant girl in sight. He had gotten drunk and sought his wife’s bed. Nine months later, Peigi O’Malley died giving birth to the long-awaited son, born September 29th and baptized Michael. The little boy was now almost six.

Within an almost indecently short time O’Malley had taken his second wife, a girl of thirteen. Nine months from their wedding day Anne had birthed Brian; a year later, Shane; and in another year, Shamus. Unlike her meek predecessor, Anne O’Malley possessed good health and high spirits. This child she carried was to be the last, she told her husband firmly. It would also, she assured him, be a boy. Five sons should give him the immortality he craved.
O’Malley had laughed and slapped her playfully on the backside. His daughters took this to mean that he was either in his dotage or growing mellow with age. Had their own mother ever made such a statement she would have been beaten black and blue. But then, Anne O’Malley was the mother of sons.

Moire looked up from her embroidery to gaze with pleasure about the hall. It had never looked so nice in their mother’s time for she, poor soul, had spent much of her life in her own rooms.
The stone floors were always well swept now, the rushes changed weekly. The oak trestles were polished to a mellow golden hue, reflecting the great silver candlesticks with their pure beeswax tapers. The big brass andirons were filled with enormous oak logs, ready to be lit when the evening arrived. Behind the high board, prominently displayed, hung a large new tapestry depicting Saint Brendan the Monk on a sky-blue background, guiding his ship across the western seas. Anne had designed it, and had been working on it almost every evening of her married life. It had been a labor of love, for the second Lady O’Malley adored not only her bluff, big husband, but their sons and their home as well.

“Aye,” came the reply. “Your father brought them back from his last voyage. He is so good to me, Moire.”

“Where is Skye?” interrupted Peigi.

“Out riding with young Dom. I am surprised at your father in pursuing this betrothal. They do not suit at all.”

“They were promised in the cradle,” explained Moire. “It wasn’t easy for Da to find husbands for us all, for we’ve none of us large dowries. Skye’s marrying the heir to the Ballyhennessey O’Flahertys is the best match of us all.”

Anne shook her head. “I fear this match. Your sister is a very independent girl.”

“And it’s all Da’s fault for he has spoiled her terribly,” said Peigi. “She should have been married off two years ago at thirteen, like the rest of us. But no, Skye did not want it. He lets her have her way all the time!”

“That’s not so, Peigi,” Eibhlin chided her sister. “Anne is correct when she says that Skye and Dom do not suit. Skye is not like us in temperament. We favor our mother while she favors Da. Dom is simply neither strong enough nor sensitive enough to be Skye’s husband.”

“Hoity-toity, sister,” said Peigi sourly. “It amazes me how much the wee nun knows about human nature.”

“Indeed and I do,” replied Eibhlin calmly, “for whom do you think the poor women of my district pour out their unhappiness to, Peigi? Certainly not the priest! He tells them it is their Christian duty to be abused by their menfolk! And then he adds to their guilt by giving them a penance.”
The sisters look shocked, and Anne broke the tension by laughing, “You’re more a rebel than a holy woman, stepdaughter.”

Eibhlin sighed. “You speak the truth, Anne, and it troubles me greatly. But though I try I cannot seem to change.”

Anne O’Malley leaned over and fondly patted her stepdaughter on the hand. “Being a woman is never, ever easy,” she said wisely, “no matter what role we choose to play in life.”