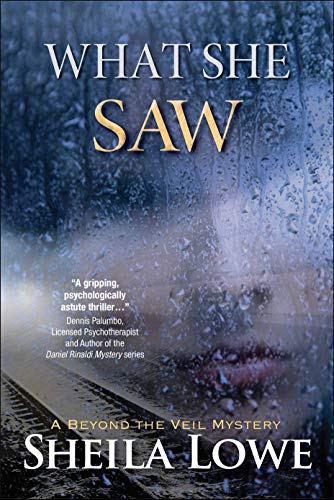 Book 1: Beyond the Veil Mystery
Sheila Lowe
Follow
Imagine waking on a train with no recollection of how you got there. You just know you can't call the police.
Genres: MysteryCrime & MysteryCrime FictionPsychological ThrillersSuspense
Buy now
Available in:

Imagine waking up on a train with no recollection of how you got there. You have no idea who you are--no name, no memories, no life. The only thing you know is, you cannot tell anyone, especially the police.
By chance or by fate, leaving the train in a beach town, this young woman runs into someone who knows her and gives her a ride home. There she finds two IDs, two sets of keys. One face, but two separate lives.

A story of psychological suspense that follows a young woman through the terrifying labyrinth of amnesia, where no one is who or what they appear to be. Claudia Rose, Detective Joel Jovanic, and Dr. Zebediah Gold from Sheila Lowe's Forensic Handwriting Mystery series play a vital role in helping her uncover a devastating past and learn what she saw that robbed her of her memory. 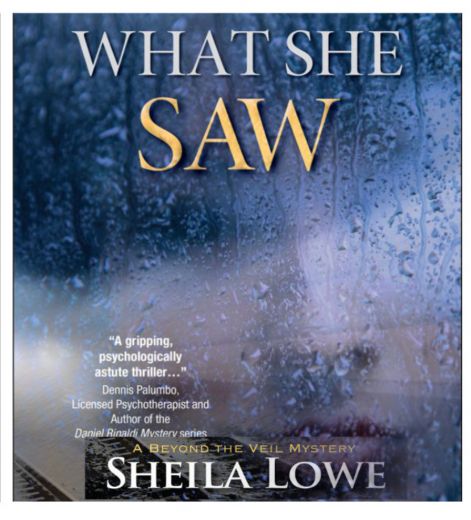 When I left Penguin after my four Forensic Handwriting mystery, I decided to write a standalone. Claudia Rose and her friends are in What She Saw, but they play a much smaller role.

The idea of amnesia has always fascinated me, as well as another theme in the book that I will leave you to discover. I didn't know at the time that this book would turn out to be the prequel to my next book, Proof of Life.

The first thing she noticed was the sound. Steel wheels rolling on rails, thrumming in time with her heartbeat. Clickety-clack. Lub dub. Clickety-clack. Lub dub. How long had she been sitting, hands clasped tight, knees and ankles pressed together as if bound? Hours? Days? Dread was a parasite burrowing deep in her brain, growing and multiplying—a thousand desperate questions, driven by the biggest question of all: What would she see if she ripped apart the filmy veil separating consciousness from the abyss? What if she opened her eyes?

Instinct told her it took more courage than she possessed to process the truth. Drifting on a soft bed of lethargy was easier than seeing the world hurtling past with the breathless rush of a roller coaster. Here, she could pretend that questions did not require answers; choices did not have to be made. She could be lulled back to oblivion.

Why won’t you leave me alone?

Even as the weak protest formed, it died on a sigh, surrendering to the inevitable: the train would reach its destination and then—and then—what?

She had no clue where the mantra came from, but silently mouthing the words brought temporary comfort. With each repetition, thread by delicate thread, layers of the veil peeled away, and one by one, numbed senses prickled back to life: goosebump-stippled arms. The taste of dehydration as toxic as the bottom of a mezcal bottle. Loud Valley Girl chatter grating on her ears. The ropy odor of a pot smoker…

Of their own accord, her eyelids flickered open, just enough to see tentacles of gauzy mist drifting above grey, choppy water that stretched all the way to the horizon.

The abyss welcomed her back.

The train thundered through a railroad crossing; clanging alarm signals jerked her to full awareness. Outside the wide window, the ocean view had been replaced by scrubby weeds and dirt; industrial buildings, their walls serving as a canvas for complicated graffiti throw-ups. Like a ghost cat on the prowl, patches of dense fog brooded low to the ground in the late afternoon—an eerie landscape where anything—or anyone—might be lurking.

Bitter gall washed through her stomach, and an edgy pins-and-needles urge to get up and run. Waiting for the coastline to reappear, she grasped the arms of her seat, releasing a sigh when it did: regimented rows of yellow rental umbrellas; beach chairs lined up like obedient soldiers waiting for orders.

The long, tortured screech of the horn startled her again, then an announcement over the loudspeaker. “Ladies and Gentlemen, we are arriving at Ventura Station.”

They were crossing a truss bridge. To the left, a long pier jutted over the ocean. Another blare and the train began to slow, the steady ding-ding-ding-ding of a crossing signal following them past a high-rise hotel on the beach.

What now? What now?

Twisting in her seat, she scanned the nearly empty carriage. There was the Valley Girl, still blabbing on her phone as if she was the center of the universe. The only other occupants, two men, were seated a half-dozen rows apart—one in a suit, his head buried in a newspaper. The other with a bad haircut and scruffy beard was clad in army fatigues that had seen better days. He was looking right at her with a bold stare that made her skin crawl.

She twisted back, fighting an urge to drop to the floor and hide from that stare. At the far end of the carriage, the EXIT sign beckoned. Staring at it, she knew that if she took the time to think about it, she would stay on the train until there were no more stations to stop at. Then what?

Like a prisoner whose cell door has unexpectedly swung open, she lurched to her feet and stepped into the aisle. Ahead of her, the carriage bent and elongated—a hall of mirrors stretching to infinity—the EXIT now miles away.

“Just where do you think you’re going?”

Help me. Why won’t you help me?

“Sit the hell down and shut up.”

But I didn’t say anything.

She gave her head a quick shake, aiming to silence the murmurs. Instead, a riot of voices exploded, vying to be heard.

“Leave me alone!” Oh crap, had she said it out loud? Hanging onto the seat backs, she took a few unsteady steps forward before her leg muscles turned to jelly and she sank into the closest seat.

Ignore it, it’s not real.

A solid hand rested on her shoulder. “I’ll call the conductor.”

A side-eye glance showed her the pressed brown trousers of the newspaper reader. Pasting on what might pass for a smile—though she suspected it emerged more as a grimace—she tried to control the tremor. “A little light-headed. I’m fine.”

“No!” She hadn’t meant it to come out so rude, but the truth was, her skin was hot and clammy, like a drying-out drunk. A chorus line of pink elephants in tutus danced into her head and made her giggle. Which was enough to send the man back to his seat with a shrug.

She sat back and closed her eyes, commanding the din in her head to hush. Counting slowly to twenty, she was surprised at the relative silence when she was done. Only one little demon continued to pound her skull with a pickaxe, and she begged him to take a hike. Taking a deep breath, she pushed herself out of the seat on still-wobbly legs. All she had to do was walk through the carriage like a normal person preparing to disembark after a normal journey.

The grinding of locomotive brakes said they were arriving at the station.

Somehow, she had found the fortitude to get herself this far. Digging deeper, she found some more—enough to pick up one foot and set it in front of the other; enough to take her past the man folding his newspaper, then the scruffy dude—the pot smoker—the sweet odor wafted off him like the dirt cloud over Pigpen in a Charlie Brown cartoon. She could feel him trying to catch her attention, but that wasn’t happening.

The EXIT doors whooshed open and Valley Girl shoved past. Newspaper guy went next, glancing at her, but saying nothing. Last off was Scruffy, hurrying away.

On the platform, the conductor was coming this way. She could already read his expression: Is this your station, or are you staying on the train? Where are you headed? And the question he would leave unspoken: What are you doing, standing on that step?

Her need to avoid answering was stronger than her need to remain in the relative safety of the entrance. A big deep breath…

The Ventura Amtrak station was a mere concrete strip, separated from the street by a wrought iron railing; a couple of benches under a metal awning, a ticketing machine. She walked down the ramp, taking in the handful of cars idling at the curb, dropping passengers off, picking them up. Directly across the street was a vast, mostly empty parking lot. A marquee on the corner identified it: ‘Ventura County Fairgrounds.’

She swung around to face the man who had spoken the accusation, realizing with something approaching relief that his scowl was directed, not at her, but at the Valley Girl.

The phone was still at her ear. “I wasn’t exactly driving the train,” the girl retorted. “Anyway, it’s not even five-thirty. I’m not all that late.”

They walked away carping at each other as the train’s engine began to rev. A sudden sharp breeze sprang up from the ocean, nipping at her arms. Shouldn’t she have a jacket to cover the thin t-shirt? And a purse. Where was her money? Her phone? She would have needed a ticket to ride the train; where was it?

She clawed at the denim pockets of her Levi’s, first the front, then the back. Nothing. Not even a dime hid in the seams. She must have left her things under the seat. Whirling around, she dashed back onto the platform, but the behemoth was already on the move.

“Hey!” she shouted, running alongside the train, heedless of the massive wheels turning inches from her feet. Her fist beat against the silver and blue siding. “Hey, wait. Wait!”

The last compartment lumbered past, forcing her to jump back as the train picked up speed, and she watched in dismay as it disappeared from sight.

The waiting vehicles had driven away, leaving the quiet street deserted. Alone in the station, she rotated in a slow circle. The train was traveling north, toward San Francisco. The road dead-ended fifty feet away. On the other side of the fairgrounds was the ocean.

Hunching her shoulders against the chill, she started walking south, back toward the hotel they had passed. And as she walked, the terrifying truth she had been warding off struck her with the force of a body blow. The truth from which she could no longer protect herself. And with it came the question for which she had no answer.