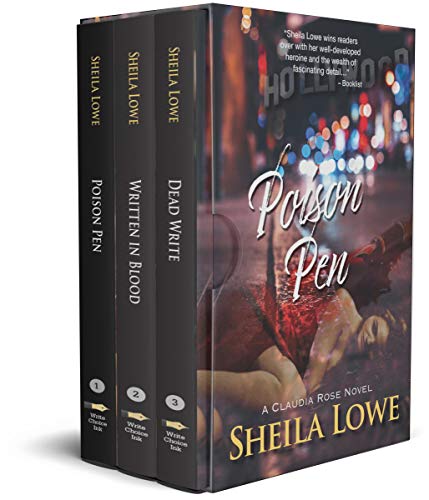 Get the first three books in the Claudia Rose Forensic Handwriting Series: Poison Pen, Written in Blood, and Dead Write.

Poison Pen: Can handwriting be faked to make murder look like suicide? That is the question facing forensic handwriting expert Claudia Rose. When powerful Hollywood agent Lindsey Alexander is found dead, police are all too willing to believe it's Lindsey's handwriting on the scrap of paper they're calling a suicide note. But not everyone is ready to accept this easy conclusion. Claudia knows first-hand the publicist's ruthlessness and cruelty, so when Lindsey's business associate begs her to prove the suicide note a fake, her instincts scream at her to run the other way. She hasn't forgotten how it felt to be humiliated by the best. But Ivan leans hard, and when she accepts the case, Claudia becomes trapped in a far darker scenario than she bargained for.

Written in Blood: Claudia Rose's latest client, the widow of a rich older man, is hated by her stepchildren, who are dead set on proving that she forged their father's signature on his will. He left his entire estate, including the Sorensen Academy, to his young wife. Intrigued by this real-life soap opera, Claudia soon breaks one of the cardinal rules of business: Never get personally involved. But when she grows attached to a troubled Sorensen student, disaster strikes, she quickly realizes that reading between the lines can mean the difference between life and death.

Dead Write: Dating can be dangerous, so clients who can afford the services of eccentric Russian “baroness” Grusha Olinetsky, are willing to pay the hundred-thousand dollar fee she charges for an introduction to their perfect mate.
When Olinetsky hires Claudia to come to Manhattan and help her uncover apparent screwups made by her nemesis, the assignment puts her at odds with her romantic partner, Detective Joel Jovanic, who suspects that Grusha herself is trouble. Drawn into the feckless lives of the rich and single, Claudia delves into a twisted world of love and lies fueled by desperation. But desperate enough to kill? Clues in the suspects' handwriting might help Claudia save Grusha's already dubious reputation before the names of more victims are scribbled into someone's little black book.