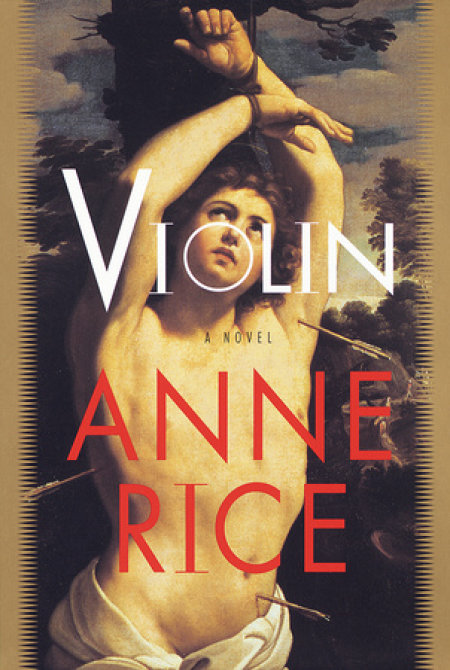 Anne Rice's Violin tells the story of two charismatic figures bound to each other by a passionate commitment to music as a means of rapture, seduction, and liberation.
At the novel's center: a uniquely fascinating woman, Triana, and the demonic fiddler Stefan, a tormented ghost who begins to prey upon her, using his magic violin to draw her into a state of madness. But Triana sets out to resist Stefan, and the struggle thrusts them both into a terrifying supernatural realm.
Violin flows abundant with the history, the drama, and the romantic intensity that have become synonymous with Anne Rice at her incomparable best.
Anne Rice is the author of eighteen books. She lives in New Orleans.
Also available as a Random House AudioBook

From the Trade Paperback edition.

HE CAME before the day Karl died.

It was late afternoon, and the city had a drowsy dusty look, the traffic on St. Charles Avenue roaring as it always does, and the big magnolia leaves outside had covered the flagstones because I had not gone out to sweep them.

I saw him come walking down the Avenue, and when he reached my corner he didn’t come across Third Street. Rather he stood before the florist shop, and turned and cocked his head and looked at me.

I was behind the curtains at the front window. Our house has many such long windows, and wide generous porches. I was merely standing there, watching the Avenue and its cars and people for no very good reason at all, as I’ve done all my life.

It isn’t too easy for someone to see me behind the curtains. The corner is busy; and the lace of the curtains, though torn, is thick because the world is always there, drifting by right around you.

He had no visible violin with him then, only a sack slung over his shoulder. He merely stood and looked at the house—and turned as though he had come now to the end of his walk and would return, slowly, by foot as he had approached—just another afternoon Avenue stroller.

He was tall and gaunt, but not at all in an unattractive way. His black hair was unkempt and rock musician long, with two braids tied back to keep it from his face, and I remember I liked the way it hung down his back as he turned around. I remember his coat on account of that—an old dusty black coat, terribly dusty, as though he’d been sleeping somewhere in the dust. I remember this because of the gleaming black hair and the way it broke off rough and ragged and long and so pretty.

He had dark eyes; I could see that much over the distance of the corner, the kind of eyes that are deep, sculpted in the face so that they can be secretive, beneath arching brows, until you get really close and see the warmth in them. He was lanky, but not graceless.

He looked at me and he looked at the house. And then off he went, with easy steps, too regular, I suppose. But then what did I know about ghosts at the time? Or how they walk when they come through?

He didn’t come back until two nights after Karl died. I hadn’t told anyone Karl was dead and the telephone-answering machine was lying for me.

These two days were my own.

In the first few hours after Karl was gone, I mean really truly gone, with the blood draining down to the bottom of his body, and his face and hands and legs turning very white, I had been elated the way you can be after a death and I had danced and danced to Mozart.

Mozart was always my happy guardian, the Little Genius, I called him, Master of His Choir of Angels, that is Mozart; but Beethoven is the Master of My Dark Heart, the captain of my broken life and all my failures.

That first night when Karl was only dead five hours, after I changed the sheets and cleaned up Karl’s body and set his hands at his sides, I couldn’t listen to the angels of Mozart anymore. Let Karl be with them. Please, after so much pain. And the book Karl had compiled, almost finished, but not quite—its pages and pictures strewn across his table. Let it wait. So much pain.

I turned to my Beethoven.

No matter who dies or when, the Second Movement of the Ninth Symphony just keeps going.

When I was a child, I loved the last movement of Beethoven’s Ninth Symphony, as does everybody. I loved the chorus singing the “Ode to Joy.” I can’t count the times I’ve seen it—here, Vienna once, San Francisco several times during the cold years when I was away from my city.

But in these last few years, even before I met Karl, it was the Second Movement that really belonged to me.

It’s like walking music, the music of someone walking doggedly and almost vengefully up a mountain. It just goes on and on and on, as though the person won’t stop walking. Then it comes to a quiet place, as if in the Vienna Woods, as if the person is suddenly breathless and exultant and has the view of the city that he wants, and can throw up his arms, and dance in a circle. The French horn is there, which always makes you think of woods and dales and shepherds, and you can feel the peace and the stillness of the woods and the plateau of happiness of this person standing there, but then …

You can dance to this music if you want, swing from the waist, and I do, back and forth like you’re crazy, making yourself dizzy, letting your hair flop to the left and then flop to the right. You can walk round and round the room in a grim marching circle, fists clenched, going faster and faster, and now and then twirling when you can before you go on walking. You can bang your head back and forth, back and forth, letting your hair fly up and over and down and dark before your eyes, before it disappears and you see the ceiling again.

This is relentless music. This person is not going to give up. Onward, upward, forward, it does not matter now—woods, trees, it does not matter. All that matters is that you walk … and when there comes just a little bit of happiness again—the sweet exultant happiness of the plateau—it’s caught up this time in the advancing steps. Because there is no stopping.

Not till it stops.

And that’s the end of the Second Movement. And I can roll over on the floor, and hit the button again, and bow my head, and let the movement go on, independent of all else, even grand and magnificent assurances that Beethoven tried to make, it seemed, to all of us, that everything would someday be understood and this life was worth it.

That night, the night after Karl’s death, I played the Second Movement long into the morning; until the room was full of sunlight and the parquet floor was glaring. And the sun made big beams through the holes in the curtains. And above, the ceiling, having lost all those headlights of the long night’s traffic, became a smooth white, like a new page on which nothing is written.

Once, at noon, I let the whole symphony play out. I closed my eyes. The afternoon was empty, with only the cars outside, the never ending cars that speed up and down St. Charles Avenue, too many for its narrow lanes, too fast for its old oaks and gently curved street lamps, drowning out in their alien thunder even the beautiful and regular roar of the old streetcar. A clang. A rattle. A noise that should have been a racket, and was once I suppose, though I never in all my life, which is over half a century, remember the Avenue ever truly being quiet, except in the small hours.

I lay that day in silence because I couldn’t move. I couldn’t do anything. Only when it got dark again did I go upstairs. The sheets were still clean. The body was stiff. I knew it was rigor mortis; there was little change in his face; I’d wrapped his face round and round with clean white cloth to keep his mouth closed, and I’d closed his eyes myself. And though I lay there all night, curled up next to him, my hand on his cold chest, it wasn’t the same as it had been when he was soft.

The softness came back by midmorning. Just a relaxing of the body all over. The sheets were soiled. Foul smells were there. But I had no intention of recognizing them. I lifted his arms easily now. I bathed him again. I changed everything, as a nurse would, rolling the body to one side for the clean sheet, then back in order to cover and tuck in the clean sheet on the other.

He was white, and wasted, but he was pliant once again. And though the skin was sinking, pulling away from the features of his face, they were still his features, those of my Karl, and I could see the tiny cracks in his lips unchanged, and the pale colorless tips of his eyelashes when the sunshine hit them.

The upstairs room, the western room, that was the one in which he’d wanted us to sleep, and in which he died, because the sun does come there late through the little attic windows.

This is a cottage, this huge house, this house of six Corinthian columns and black cast-iron railings. It’s just a cottage really, with grand spaces on one floor, and small bedrooms carved from its once cavernous attic. When I was very little it was only attic then, and smelled so sweet, like wood all the time, like wood and attic. Bedrooms came when my younger sisters came.

This western corner bedroom was a pretty room. He’d been right to choose it, dress it so bountifully, right to fix everything. It had been so simple for him.