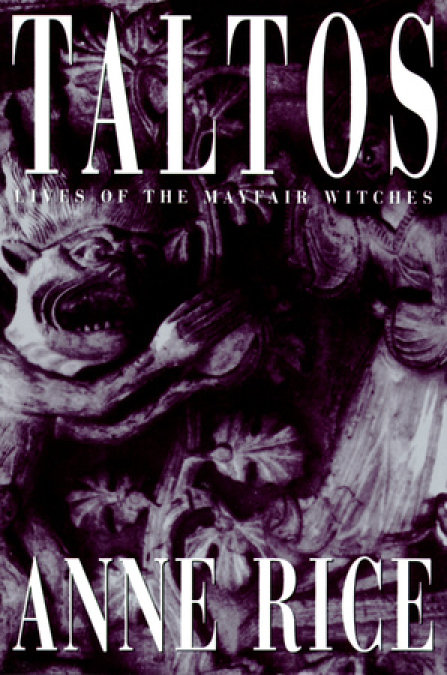 "RICE IS A FORMIDABLE TALENT...[Taltos] is a curious amalgam of gothic, glamour fiction, alternate history and high soap opera."
--The Washington Post Book World
"CAPTIVATING...TALTOS IS A WONDERFUL OFFERING...THE BEST SHE'S DONE....There is a new member of Anne Rice's macabre family of monsters, and he's probably the loneliest, most melancholy creature on earth....Rice keeps the mystic fires burning strong."
--The Milwaukee Journal
"SPELLBINDING...MYTHICAL...Anne Rice is a pure storyteller."
--Cosmopolitan
"RICE IS A STYLISH WRITER...What works best throughout the book is the magical collusion of the real and the mythical, the intermingling of the Taltos and witches with ordinary mortals in the present-day world."
--New York Newsday
"BEAUTIFULLY WRITTEN."
--Kirkus Reviews (starred)
"WHAT CAN I CONFESS? I'M ASHLAR. I'M A TALTOS.
It's centuries since I've seen one single other member of my own species. Oh, there have been others. I've heard of them, chased after them, and in some instances almost found them. Mark, I say almost. But not in centuries have I touched my own flesh and blood, as humans are so fond of saying. Never in all this time....[pg. 64]
When Ashlar learns that another Taltos has been seen, he is suddenly propelled into the haunting world of the Mayfair family, the New Orleans dynasty of witches forever besieged by ghosts, spirits, and their own dizzying powers. For Ashlar knows this powerful clan is intimately linked to the heritage of the Taltos.
In a swirling universe filled with death and life, corruption and innocence, this mesmerizing novel takes us on a wondrous journey back through the centuries to a civilization half-human, of wholly mysterious origin, at odds with mortality and immortality, justice and guilt. It is an enchanted, hypnotic world that could only come from the imagination of Anne Rice . . . 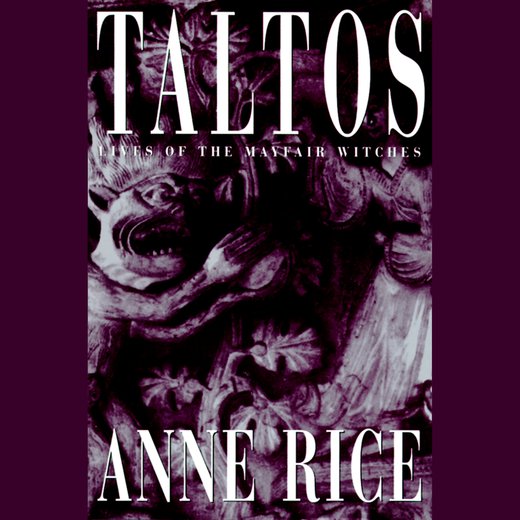 It had snowed all day. As the darkness fell, very close and quickly, he stood at the window looking down on the tiny figures in Central Park. A perfect circle of light fell on the snow beneath each lamp. Skaters moved on the frozen lake, though he could not make them out in detail. And cars pushed sluggishly over the dark roads.

To his right and his left, the skyscrapers of midtown crowded near him. But nothing came between him and the park, except, that is, for a jungle of lower buildings, rooftops with gardens, and great black hulking pieces of equipment, and sometimes even pointed roofs.

He loved this view; it always surprised him when others found it so unusual, when a workman coming to fix an office machine would volunteer that he’d never seen New York like this before. Sad that there was no marble tower for everyone; that there was no series of towers, to which all the people could go, to look out at varying heights.

Make a note: Build a series of towers which have no function except to be parks in the sky for the people. Use all the beautiful marbles which you so love. Maybe he would do that this year. Very likely, he would do it. And the libraries. He wanted to establish more of these, and that would mean some travel. But he would do all this, yes, and soon. After all, the parks were almost completed now, and the little schools had been opened in seven cities. The carousels had been opened in twenty different places. Granted, the animals were synthetic, but each was a meticulous and indestructible reproduction of a famous European hand-carved masterpiece. People loved the carousels. But it was a time for a spate of new plans. The winter had caught him dreaming.…

In the last century, he had put into material form a hundred such ideas. And this year’s little triumphs had their comforting charm. He had made an antique carousel within this building, all of the original old horses, lions, and such that had provided molds for his replicas. The museum of classic automobiles now filled one level of the basement. The public flocked to see the Model Ts, the Stutz Bearcats, the MG-TDs with their wire wheels.

And of course there were the doll museums—in large, well-lighted rooms on two floors above the lobby—the company showcase, filled with the dolls he’d collected from all parts of the world. And the private museum, open only now and then, including the dolls which he himself had personally cherished.

Now and then he slipped downstairs to watch the people, to walk through the crowds, never unnoticed, but at least unknown.

A creature seven feet in height can’t avoid the eyes of people. That had been true forever. But a rather amusing thing had happened in the last two hundred years. Human beings had gotten taller! And now, miracle of miracles, even at his height, he did not stand out so very much. People gave him a second glance, of course, but they weren’t frightened of him anymore.

Indeed, occasionally a human male came into the building who was in fact taller than he was. Of course the staff would alert him. They thought it one of his little quirks that he wanted such people reported to him. They found it amusing. He didn’t mind. He liked to see people smile and laugh.

He’d turn to the bank of small glowing screens, and quickly catch sight of the individual. Only human. He usually knew for certain right away. Once in a great while, he wasn’t sure of it. And he went down in the silent, speeding elevator, and walked near the person long enough to ascertain from a score of details that this was only a man.

Other dreams: small play buildings for children, made exquisitely out of space-age plastics with rich and intricate detail. He saw small cathedrals, castles, palaces—perfect replicas of the larger architectural treasures—produced with lightning speed, and “cost effective,” as the board would put it. There would be numerous sizes, from dwellings for dolls to houses which children could enter themselves. And carousel horses for sale, made of wood resin, which almost anyone could afford. Hundreds could be given to schools, hospitals, other such institutions. Then there was the ongoing obsession—truly beautiful dolls for poor children, dolls that would not break, and could be cleaned with ease—but that he had been working on, more or less, since the new century dawned.

For the last five years he had produced cheaper and cheaper dolls, dolls superior to those before them, dolls of new chemical materials, dolls that were durable and lovable; yet still they cost too much for poor children. This year he would try something entirely different.… He had plans on the drawing board, a couple of promising prototypes. Perhaps …

He felt a consoling warmth steal through him as he thought of these many projects, for they would take him hundreds of years. Long ago, in ancient times as they called them, he had dreamed of monuments. Great circles of stone for all to see, a dance of giants in the high grass of the plain. Even modest towers had obsessed him for decades, and once the lettering of beautiful books had taken all his joy for centuries.

But in these playthings of the modern world, these dolls, these tiny images of people, not children really, for dolls never really did look like children, he had found a strange and challenging obsession.

Monuments were for those who traveled to see them. The dolls and toys he refined and manufactured reached every country on the globe. Indeed, machines had made all sorts of new and beautiful objects available for people of all nations—the rich, the impoverished, those in need of comfort, or sustenance and shelter, those kept in sanitariums and asylums which they could never leave.

His company had been his redemption; even his wildest and most daring ideas had been put into successful production. Indeed, he did not understand why other toy companies made so few innovations, why cookie-cutter dolls with vapid faces lined the shelves of emporiums, why the ease of manufacture had not produced a wilderness of originality and invention. Unlike his joyless colleagues, with each of his triumphs he had taken greater risks.

It didn’t make him happy to drive others out of the market. No, competition was still something he could only grasp intellectually. His secret belief was that the number of potential buyers in today’s world was unlimited. There was room for anyone marketing anything of worth. And within these walls, within this soaring and dangerous tower of steel and glass, he enjoyed his triumphs in a state of pure bliss which he could share with no one else.

No one else. Only the dolls could share it. The dolls who stood on the glass shelves against the walls of colored marble, the dolls who stood on pedestals in the corners, the dolls who clustered together on his broad wooden desk. His Bru, his princess, his French beauty, a century old; she was his most enduring witness. Not a day passed that he didn’t go down to the second floor of the building and visit the Bru—a bisque darling of impeccable standards, three feet tall, her mohair curls intact, her painted face a masterpiece, her torso and wooden legs as perfect now as they were when the French company had manufactured her for the Paris market over one hundred years ago.

That had been her allure, that she was a thing for hundreds of children to enjoy; a pinnacle had been reached in her, of craft and mass production. Even her factory clothes of silk represented that special achievement. Not for one, but for many.

There had been years when, wandering the world, he had carried her with him, taking her out of the suitcase at times just to look into her glass eyes, just to tell her his thoughts, his feelings, his dreams. In the night, in squalid lonely rooms, he had seen the light glint in her ever-watchful eyes. And now she was housed in glass, and thousands saw her yearly, and all the other antique Bru dolls now clustered around her. Sometimes he wanted to sneak her upstairs, put her on a bedroom shelf. Who would care? Who would dare say anything? Wealth surrounds one with a blessed silence, he thought. People think before they speak. They feel they have to. He could talk to the doll again if he wanted to. In the museum, he was silent when they met, the glass of the case separating them. Patiently she waited to be reclaimed, the humble inspiration for his empire.

Of course this company of his, this enterprise of his, as it was so often called by papers and magazines, was predicated on the development of an industrial and mechanical matrix which had existed now for only three hundred years. What if war were to destroy it? But dolls and toys gave him such sweet happiness that he imagined he would never hereafter be without them. Even if war reduced the world to rubble, he would make little figures of wood or clay and paint them himself.