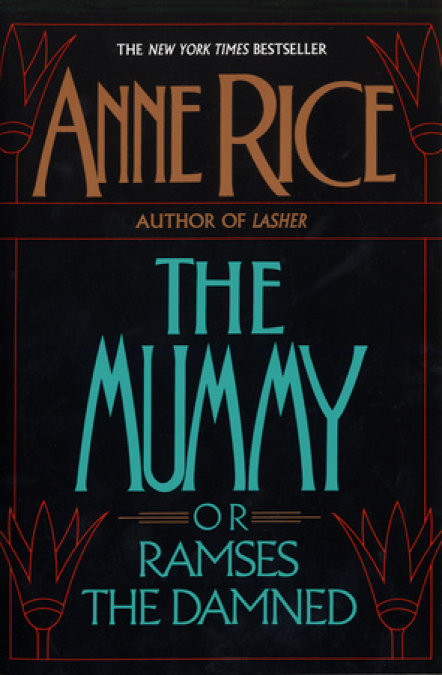 He was Ramses the Damned in ancient Egypt, but awoke in opulent Edwardian London as Dr. Ramsey, expert in Egyptology. He mixes with the aristocrats and samples their voluptuous lifestyle, but it is for his beloved, Cleopatra, that he longs, and will do anything to be with....


From the Trade Paperback edition. 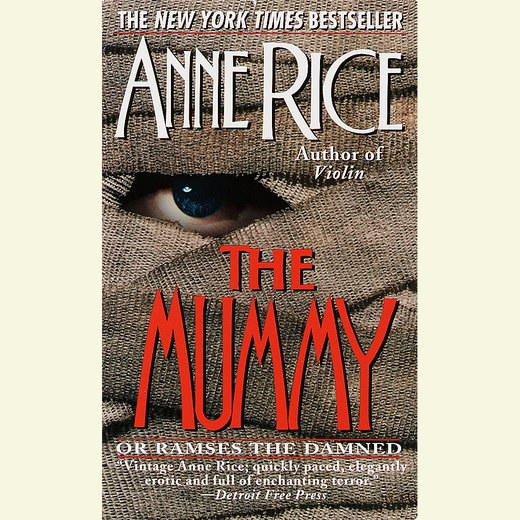 THE CAMERA flashes blinded him for a moment. If only he could get the photographers away.

But they had been at his side for months now—ever since the first artifacts had been found in these barren hills, south of Cairo. It was as if they too had known. Something about to happen. After all these years, Lawrence Stratford was on to a major find.

And so they were there with the cameras, and the smoking flashes. They almost knocked him off balance as he made his way into the narrow rough-hewn passage towards the letters visible on the half-uncovered marble door.

The twilight seemed to darken suddenly. He could see the letters, but he couldn’t make them out.

“Yes, Lawrence.” At once the torch exploded behind him, and in a flood of yellow illumination, the slab of stone was wonderfully visible. Yes, hieroglyphs, deeply etched and beautifully gilded, and in Italian marble. He had never seen such a sight.

He felt the hot silky touch of Samir’s hand on his as he began to read aloud:

“ ‘Robbers of the Dead, Look away from this tomb lest you wake its occupant, whose wrath cannot be contained. Ramses the Damned is my name.’ ”

He glanced at Samir. What could it mean?

“Go on, Lawrence, translate, you are far quicker than I am,” Samir said.

“ ‘Ramses the Damned is my name. Once Ramses the Great of Upper and Lower Egypt; Slayer of the Hittites, Builder of Temples; Beloved of the People; and immortal guardian of the kings and queens of Egypt throughout time. In the year of the death of the Great Queen Cleopatra, as Egypt becomes a Roman province, I commit myself to eternal darkness; beware, all those who would let the rays of the sun pass through this door.’ ”

“But it makes no sense,” Samir whispered. “Ramses the Great ruled one thousand years before Cleopatra.”

“Yet these are nineteenth-dynasty hieroglyphs without question,” Lawrence countered. Impatiently, he scratched away at the loose rubble. “And look, the inscription’s repeated—in Latin and in Greek.” He paused, then quickly read the last few Latin lines.

“ ‘Be Warned: I sleep as the earth sleeps beneath the night sky or the winter’s snow; and once awakened, I am servant to no man.’ ”

For a moment Lawrence was speechless, staring at the words he’d read. Only vaguely did he hear Samir:

Reluctantly Lawrence turned and saw that Samir’s suspicion had turned to fear.

“The body of Ramses the Great is in the Cairo Museum,” Samir said impatiently.

“No,” Lawrence answered. He was aware of a chill moving slowly up his neck. “There’s a body in the Cairo Museum, but it’s not Ramses! Look at the cartouches, the seal! There was no one in the time of Cleopatra who could even write the ancient hieroglyphs. And these are perfect—and done like the Latin and the Greek with infinite care.”

Oh, if only Julie were here, Lawrence thought bitterly. His daughter, Julie, was afraid of nothing. She would understand this moment as no one else could.

He almost stumbled as he backed out of the passage, waving the photographers out of his path. Again, the flashes went off around him. Reporters rushed towards the marble door.

“Get the diggers back to work,” Lawrence shouted. “I want the passage cleared down to the threshold. I’m going into that tomb tonight.”

“Lawrence, take your time with this,” Samir cautioned. “There is something here which must not be dismissed.”

“Samir, you astonish me,” Lawrence answered. “For ten years we’ve been searching these hills for just such a discovery. And no one’s touched that door since it was sealed two thousand years ago.”

Almost angrily, he pushed past the reporters who caught up with him now, and tried to block the way. He needed the quiet of his tent until the door was uncovered; he needed his diary, the only proper confidant for the excitement he felt. He was dizzy suddenly from the long day’s heat.

“No questions now, ladies and gentlemen,” Samir said politely. As he always did, Samir came between Lawrence and the real world.

Lawrence hurried down the uneven path, twisting his ankle a little painfully, yet continuing, his eyes narrow as he looked beyond the flickering torches at the sombre beauty of the lighted tents under the violet evening sky.

Only one thing distracted him before he reached the safety zone of his camp chair and desk: a glimpse of his nephew, Henry, watching idly from a short distance away. Henry, so uncomfortable and out of place in Egypt; looking miserable in his fussy white linen suit. Henry, with the inevitable glass of Scotch in his hand, and the inevitable cheroot on his lip.

Undoubtedly the belly dancer was with him—the woman, Malenka, from Cairo, who gave her British gentleman all the money she made.

Lawrence could never entirely forget about Henry, but having Henry underfoot now was more than he could bear.

In a life well lived, Lawrence counted Henry as his only true disappointment—the nephew who cared for no one and nothing but gaming tables and the bottle; the sole male heir to the Stratford millions who properly couldn’t be trusted with a one-pound note.

Sharp pain again as he missed Julie—his beloved daughter, who should have been here with him, and would have been if her young fiancé hadn’t persuaded her to stay at home.

Henry had come to Egypt for money. Henry had company papers for Lawrence to sign. And Henry’s father, Randolph, had sent him on this grim mission, desperate as always to cover his son’s debts.

A fine pair they are, Lawrence thought grimly—the ne’er-do-well and the chairman of the board of Stratford Shipping who clumsily funneled the company’s profits into his son’s bottomless purse.

But in a very real way Lawrence could forgive his brother, Randolph, anything. Lawrence hadn’t merely given the family business to Randolph. He had dumped it on Randolph, along with all its immense pressures and responsibilities, so that he, Lawrence, could spend his remaining years digging among the Egyptian ruins he so loved.

And to be perfectly fair, Randolph had done a tolerable job of running Stratford Shipping. That is, until his son had turned him into an embezzler and a thief. Even now, Randolph would admit everything if confronted. But Lawrence was too purely selfish for that confrontation. He never wanted to leave Egypt again for the stuffy London offices of Stratford Shipping. Not even Julie could persuade him to come home.

And now Henry stood there waiting for his moment. And Lawrence denied him that moment, entering the tent and eagerly pulling his chair up to the desk. He took out a leather-bound diary which he had been saving, perhaps for this discovery. Hastily he wrote what he remembered of the door’s inscription and the questions it posed.

“Ramses the Damned.” He sat back, looking at the name. And for the first time he felt just a little of the foreboding which had shaken Samir.

What on earth could all this mean?