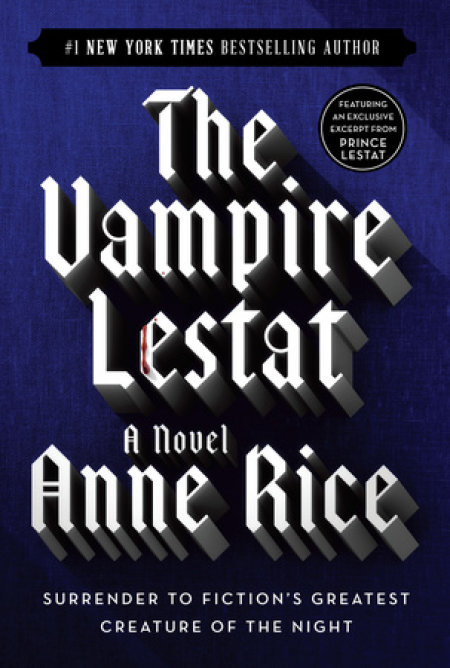 Lestat. The vampire hero of Anne Rice's enthralling novel is a creature of the darkest and richest imagination. Once an aristocrat in the heady days of pre-revolutionary France, now a rock star in the demonic, shimmering 1980s, he rushes through the centuries in search of others like him, seeking answers to the mystery of his eternal, terrifying existence. His is a mesmerizing story-passionate, complex, and thrilling. 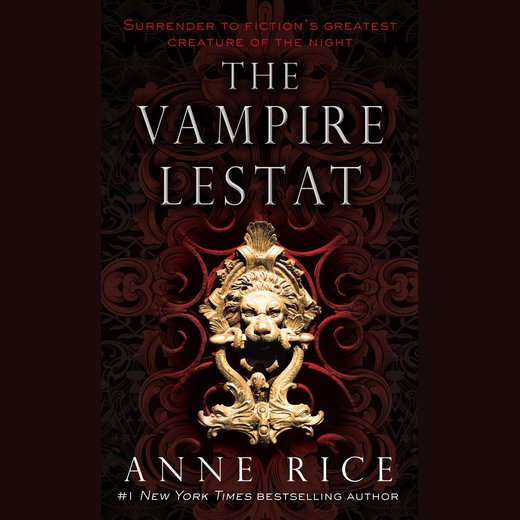 IN THE WINTER OF MY TWENTY-FIRST YEAR, I WENT out alone on horseback to kill a pack of wolves.

This was on my father's land in the Auvergne in France, and these were the last decades before the French Revolution.

It was the worst winter that I could remember, and the wolves were stealing the sheep from our peasants and even running at night through the streets of the village.

These were bitter years for me. My father was the Marquis, and I was the seventh son and the youngest of the three who had lived to manhood. I had no claim to the tile or the land, and no prospects. Even in a rich family, it might have been that way for a younger boy, but our wealth had been used up long ago. My eldest brother, Augustin, who was the rightful heir to all we possessed, had spent his wife's small dowry as soon as he married her.

My father's castle, his estate, and the village nearby were my entire universe. And I'd been born restless--the dreamer, the angry one, the complainer. I wouldn't sit by the fire and talk of old wars and the days of the Sun King. History had no meaning for me.

But in this dim and old fashioned world, I had become the hunter. I brought in the pheasant, the venison, and the trout from the mountain streams--whatever was needed and could be got--to feed the family. It had become my life by this time--and one I shared with no one else--and it was a very good thing that I'd taken it up, because there were years when we might have actually starved to death.

Of course this was a noble occupation, hunting one's ancestral lands, and we alone had the right to do it. The richest of the bourgeois couldn't lift his gun in my forests. But then again he didn't have to lift his gun. He had money.

Two times in my life I'd tried to escape this life, only to be brought back with my wings broken. But I'll tell more on that later.

Right now I'm thinking about the now all over those mountains and the wolves that were frightening the villagers and stealing my sheep. And I'm thinking of the old saying in France in those days, that if you lived in the province of Auvergne you could get no farther from Paris.

Understand that since I was the lord and the only lord anymore who could sit a horse and fire a gun, it was natural that the villagers would come to me, complaining about the wolves and expecting me to hunt them. It was my duty.

I wasn't the least afraid of the wolves either. Never in my life had I seen or heard of a wolf attacking a man. And I would have poisoned them, if I could, but meat was simply too scarce to lace with poison.

So early on a very cold morning in January, I armed myself to kill the wolves one by one. I had three flintlock guns and an excellent flintlock rifle, and these I took with me as well as my muskets and my father's sword. But just before leaving the castle, I added to this little arsenal one or two ancient weapons that I'd never bothered with before.

Our castle was full of old armor. My ancestors had fought in countless noble wars since the times of the Crusades with St. Louis. And hung on the walls above all this clattering junk were a good many lances, battleaxes, flails, and maces.

It was a very large mace--that is, a spiked club--that I took with me that morning, and also a good-sized flail: an iron ball attached to a chain that could be swung with immense force at an attacker.

Now remember this was the eighteenth century, the time when white-wigged Parisians tiptoed around in high-heeled satin slippers, pinched snuff, and dabbed at their noses with embroidered handkerchiefs.

And here I was going out to hunt in rawhide boots and buckskin coat, with these ancient weapons tied to the saddle, and my two biggest mastiffs beside me in their spiked collars.

That was my life. And it might as well have been lived in the Middle Ages. And I knew enough of the fancy-dressed travelers on the post road to feel it rather keenly. The nobles in the capital called us country lords "harecatchers." Of course we could sneer at them and call them lackeys to the king and queen. Our castle had stood for a thousand years, and not even the great Cardinal Richelieu in his war on our kind had managed to pull down our ancient towers. But as I said before, I didn't pay much attention to history.

I was unhappy and ferocious as I rode up the mountain.

I wanted a good battle with the wolves. There were five in the pack according to the villagers, and I had my guns and two dogs with jaws so strong they could snap a wolf's spine in an instant.

Well, I rode for an hour up the slopes. Then I came into a small valley I knew well enough that no snowfall could disguise it. And as I started across the broad empty field towards the barren wood, I heard the first howling.

Within seconds there had come another howling and then another, and now the chorus was in such harmony that I couldn't tell the number of the pack, only that they had seen me and were signaling to each other to come together, which was just what I had hoped they would do.

I don't think I felt the slightest fear then. But I felt something, and it caused the hair to rise on the backs of my arms. The countryside for all its vastness seemed empty. I readied my guns. I ordered my dogs to stop their growling and follow me, and some vague thought came to me that I had better get out of the open field and into the woods and hurry.

My dogs gave their deep baying alarm. I glanced over my shoulder and saw the wolves hundreds of yards behind me and streaking straight towards me over the snow. Three giant gray wolves they were, coming on in a line.

I broke into a run for the forest.

It seemed I would make it easily before the three reached me, but wolves are extremely clever animals, and as I rode hard for the trees I saw the rest of the pack, some five full-grown animals, coming out ahead of me to my left. It was an ambush, and I could never make the forest in time. And the pack was eight wolves, not five as the villagers had told me.

Even then I didn't have sense enough to be afraid. I didn't ponder the obvious fact that these animals were starving or they'd never come near the village. Their natural reticence with men was completely gone.

I got ready for battle. I stuck the flail in my belt, and with the rifle I took aim. I brought down a big male yards away from me and had time to reload as my dogs and the pack attacked each other.