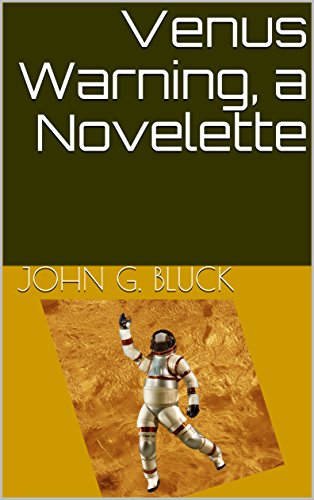 The year is 2086. A dozen astronauts fly to the cloudy planet, Venus, to explore it in heat-resistant spacesuits. Temperatures at that world's surface are hot enough to melt lead. What the explorers discover astounds the inhabitants of Earth and may well determine the survival of the human race.

1 - The Struggle for Life

Ruthless sunlight baked Figar as he lay on the burning hot mud. It was rapidly thickening and soon would turn hard. His lizard body was ill-suited for the abrupt change in climate that was underway.

Figar had stopped to rest by a jagged boulder. He drew his deadly dart pistol, and leaned back against the rock that protected him from enemies that had followed him.

Figar's head fell forward into a fleeting sleep for mere seconds. Suddenly there was a high whining as a swarm of meter-long beetles attacked, jarring him awake. He fired his dart gun, killing three of the huge beetles in quick succession. Gun smoke loitered in the stifling air. His fast, accurate shooting scared the remaining insects. They retreated out of range. Struggling to his feet, Figar resumed walking toward the lake. All he could think of was diving into the clear water and drinking his fill.

Skeletons of dead trees on the horizon and the blazing sky were constant reminders of the drastic changes the planet had suffered. The sky had turned from bright blue to dull orange in just a few weeks -- while the temperature had risen from a comfortable ninety-five degrees to a deadly 135 degrees. Extreme heat already had killed most of the planet's plants and animals.

Packs of ferocious razor-back beetles hunted those animals that still lived, following them and waiting for them to weaken enough to be killed and eaten.

Figar was dizzy, light-headed. He struggled to remain alert. At least a hundred hungry beetles stalked him, just out of range, waiting for his collapse. The large insects could run thirty markons a cycle, as fast as any land animal on the planet.

Though dumb, the beetles were smart enough to wait for Figar's near death so they could safely rip off his green scales and drink the moisture and blood from his body. Each of the ferocious creatures had 138 small, scalpel-sharp teeth that could slice Figar's body into easy-to-swallow chunks.

Figar's tough feet were bleeding. He was not used to walking out of water on land, but his inner strength carried him on. He was slender – three meters long and 164 lutons in weight. Handsome, green scales covered him, and dark-black, glistening eyes hinted at his extreme intelligence. He had survived while millions of other beings had died in the last few weeks. Nevertheless, if within a few hours he did not reach the lake located one markon away, he would be finished. The beetles were regrouping, getting ready to make a coordinated attack upon him.

Figar's blurry eyes gazed slightly downhill at the lake and the ribbon of green vegetation on the edge of its beach. Was his mind fooling him? Had his thirst concocted a mirage? To stop too long where he rested was suicide. Failure to reach water meant a slow, painful death.

The beetles made disturbing siren-like cries that rattled Figar's nerves. These giant insects became excited when the broiling wind shifted, carrying the smell of blood that seeped from Figar's blistered feet.

The lake was now a blurry vision to Figar. His mind wandered. Unsteady, he dragged himself forward step by step with great determination. The smell of dead bodies permeated the hot air. The stench no longer nauseated him, as it had in the beginning, three weeks ago.

His sun-cooked scales burned his insides. He knew he must get to the lake and submerge himself to dissipate his body heat. His long, pink tongue was swollen and hung out of the side of his mouth.

I am the world, Figar, a voice screamed in his sizzling brain. Figar squeezed his eyes shut. You and others like you caused billions and billions of deaths because of your greed. Now, I'm barren, and life cannot exist on me for long! The utterance seemed to echo inside his skull. The planet yelled shrilly, Why didn't you listen to your inner voice, Figar? Why? Why?

Figar opened his eyes. He saw his beautiful wife, Tara, and their four small children dancing in the air. But he knew that they had died despite his greatest efforts to save them.

A wave of remorse shook his body. If only he had stood up as a leader on his two rear legs years ago. He should have declared to the scientific community that their world was destined to die unless they took drastic, immediate action to reverse the planet's runaway heating.

Just months ago that damn Dr. Gill had threatened him, finally cajoling him into keeping quiet about the danger of how their planet could become an oven.

"You'll only upset the directors of the academy, Figar," Gill had said. "Then I'd have to discharge you from the academy -- not because I'd want to do so, but because they'd force me to do it. Don't be a fool."

"The planet is heating much faster than the directors suspect," Figar had told Gill, "and hot, deadly temperatures may result. We need to act now before it's too late. The atmosphere is gaining carbon dioxide. We must stop the burning of the black, liquid mud at once."

"Look, Figar," Gill had said, "you've got it made. We're paying you well, and that'll continue. We can talk to the directors of the economic council and outline how they need to reduce burning and gradually shift to hydrogen fuel. They can't do it too fast. They have too much invested in pipelines and refineries. They can't switch overnight, Figar." Gill smiled.

"Okay, Gill," Figar had said, even though his guts had shrilly yelled at him to say no.

In ten generations, carbon dioxide had risen from less than one-half of a percent of the lower atmosphere to three-quarters of a percent. It was enough to heat the tropics to lethal temperatures.

Deep lakes and the oceans contained thirty times as much dissolved carbon dioxide as the air. That trapped gas would escape when much of the water evaporated. Increased water vapor and carbon dioxide in the atmosphere was forming a thick blanket of insulating air. It would trap even more heat close to the planet. Figar had theorized that this additional heat would free yet more carbon dioxide from the evaporating water. In the last few weeks his theory had become reality. The planet was heating like an oven.