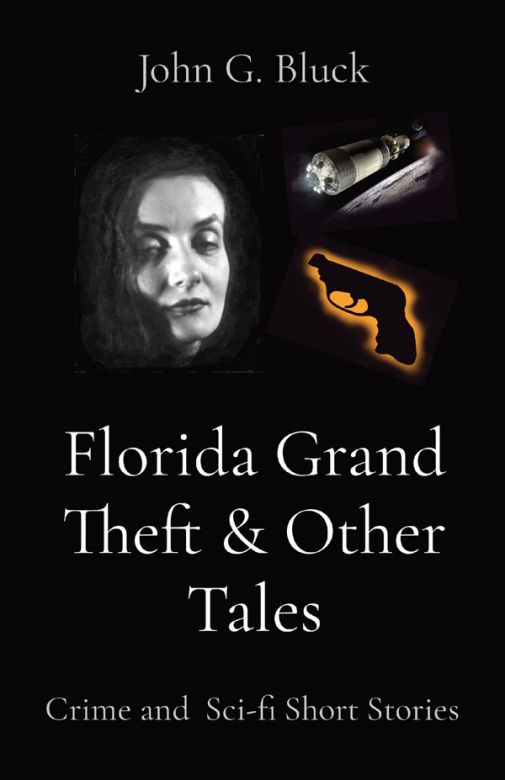 Florida Grand Theft & Other Tales is a collection of sixteen crime and science fiction short stories.

Some of the tales are strictly fictional crime stories. Others are solely in the science fiction genre. Many other yarns combine both crime and sci-fi genres.

Headlines for the crime stories in this volume:

"Florida Grand Theft" -- A purse is a tempting target for a lady unable to pay rent.

"BART and Ernie" -- A grocery cashier confronts crime on a BART train.

"One in a Billion Women" -- A wily hacker raids election computers in New York City.

"Death by Snub Nose" -- A hobo is accused of murder with weighty evidence against him.

"Ribs of a Pig" -- A new crime scene technician seeks to impress a young woman.

Headlines for the science fiction stories in this book:

"The Potential President" -- An unlikely candidate runs for president of the U.S.

"Buzz" -- A robotic bee is a key undercover agent.

"The DNA of History" -- Ant-sized extraterrestrials visit a boy, affecting his entire life.

"Adventures in Time" -- An astronaut sends a dispatch as his ship careens toward a black hole.

"Until Death Do Us Part" -- Micro-robots play a key role in a crime.

"The Amazing Mr. Smith" -- A young man with a hairy body copes with his condition.

It was about 9:00 p.m. and chilly for the Miami area. I was in the All Day Sales store near the Dadeland North Station to buy a sandwich with the last of my cash. My stomach was aching for food. As I walked toward the café, I saw a medium-sized purse in a shopping cart. The owner was nowhere in sight. Maybe she was in the next aisle? I had hardly any money, and the rent was past due. Being desperate for cash, I pulled my black sweatshirt’s hood over my head, grabbed the purse, draped it over my shoulder, and walked slowly toward the exit.

I figured that a woman like me with a big Afro, wearing second-hand clothes, and rushing out of the store would stand out, so I took my time leaving.

A scream jolted me.

“Stop, thief!” A heavy-set woman waddled toward me. “The one near the door!”

I pulled my hood down and hid my face with my right hand, as I ran the last few feet toward the automatic door, which swung open. I sprinted through a department store and into the parking lot and the darkness of the night, hoping security cameras didn’t get a good picture of my face. Near a streetlamp I glanced into the purse and saw a wad of cash, four loose hundred-dollar bills, and a big diamond ring. That scared me because I knew that stealing more than $300 in Florida was at least third degree grand theft, good for up to five years in the clink and maybe even a $5,000 fine. And my kid would probably go into foster care.

My goal was to get on the next Metro Rail train, which was due to stop at the Dadeland North Station in a few minutes as best as I could remember.

This was the first and only time I had stolen money to make ends meet. I was working at a burger place. It wasn’t great money, but it was honest coin.

My name is Daisy Dunn. I’m twenty-nine and a single mom. Unlike me, my live-in boyfriend at the time, Joe Blackwell, stole anything he could lay his hands on to support his drug habit. He was addicted to pain killers, mostly Oxycodone. I don’t know if he’s still alive or not.

I had kicked Carlos out the week before. He raided my purse of all my rent money and my one-and-only credit card, which he charged to the max. My son, Roscoe, was twelve. I couldn't be homeless. I didn’t even have a car to sleep in. I had food stamps, and I guess I could’ve found a food bank, if there was one nearby. But I needed a roof over my head.

As I fled, a fat security guard saw me running. I was out of breath already—mostly from fear. I looked behind me and saw the dude whip out a two-way radio and start talking into it, as he switched on a heavy flashlight. Good thing he fumbled the flashlight and dropped it. He was slow to pick it up. Thank God. I scampered toward Southwest 84th Street. I could see the guard’s flashlight moving back and forth, as he ran toward me kind of sluggish. I imagined being in jail. I ran faster.

I crossed 84th and turned right toward a tall building. There was a pizza place on the corner of a parking lot, which I ran for. I moved along the big building past a dry cleaner’s shop toward the Snapper Creek Canal. I heard a helicopter. I looked up and saw a police chopper. It was still pretty far away, but a spotlight on the helicopter turned on, and the police were flying toward me. I wasn’t sure if I was their target. But to be safe, I decided not to go toward the Southwest 70th Avenue Bridge. It was around the far side of the building, which stood along the canal.

If the police chopper were after me, the cops would be shining their light on the bridge because that was the closest way toward the rail station, just across the canal.

I reached into the purse to grab the money and ring. Then I thought better of it. I decided to dump the purse and the loot in the canal. I turned and peeked back around the corner of the big building. The private cop, as fat as he was, was getting too close. I was trapped next to the canal. Maybe I would take the money, anyway. I jammed my hand in the purse. The heavy broad who owned the purse carried all kinds of stuff in it. I felt a plastic straw. Lucky. I kept the straw and tossed the purse in the water under the bridge.

I heard the guard’s heavy footsteps around the corner of the building. I slipped slowly into the water. It smelled like one big BM. Maybe alligators were in there? Uh-oh, I thought. I had just seen a TV program about ‘gators and how one bit the leg off a small child who wandered too close to a canal. I began to shiver, not just ‘cuz the canal water was cold for Miami and not ‘cuz it smelled like a big lizard’s poop, but ‘cuz I thought I could become ‘gator food.

I put the straw in my mouth, took a deep breath, held my nose, and slipped under the water.