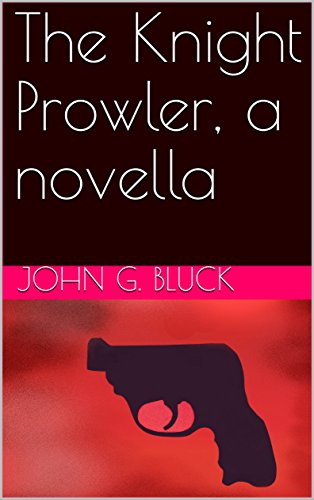 "The Knight Prowler, a novella," is a murder mystery set in the near future in Livermore, California. A Lawrence Livermore National Laboratory engineer working on a Top Secret weapons program is killed. TV cameraman Rick Knight helps his brother, a policeman, to solve this murder.

1 the date with lisa

I rolled out of bed early at six that Tuesday night in late October 2047 to get ready for my 8:00 p.m. to 4:00 a.m. shift. My usual gig was trolling the Bay Area for scenes of villainy that I could record for my employer, KGO-TV News, Channel 7, San Francisco.

As the nighttime crime reporter, I was usually all by my lonesome. I was correspondent, cameraman, light man, audio man, and technician. The difference that night was that I was going to have a lovely, blond passenger ride along with me in my "cruiser," an electric Land Rover.

I usually spent a lot of time scouting around Oakland. People often asked me if I carried a "piece," but I didn't own a firearm. Crooks rarely were stupid enough to hassle police or the news media back then.

In fact, one Oakland cop, John Crosby, once told me that he would personally do-in my killer, if anybody wasted me. "What good would that do me?" I had asked Crosby.

"It's a deterrent," Crosby said. "They know that I'd take them out, if they even tried to kill you. Don't worry, buddy."

I put on clean corduroy trousers, my best blue flannel shirt, and a new pair of black Nike shoes. Usually, I wore a more comfortable, though admittedly, stinky pair of sneakers, but I didn't want to look or smell too bum-like to Lisa Grotz, my rider.

I first met Lisa at Blackie's Bar in the City. Almost every evening after the six o'clock news for the last year we'd seen each other in the bar. We played slop pool, darts, and talked a lot. Maybe she took a liking to me the first time we met because that booze hall was dark, and she didn't see the acne scars on my face. Even so, she should have noticed that I was horse-like with a long nose, stringy brown hair, and a six-two frame. Frankly, I've always thought that I look like Ichabod Crane, tall and lanky. Despite my shortcomings, she seemed to like me.

Blackie's was frequented by TV reporters and some electronic print journalists. Just as today, most of the TV folk that October were pretty people, unlike me.

Lisa was my opposite, beautiful. She was one of the weather forecasters at KRON-TV, Channel 4, San Francisco. She stood five-foot-five and had blond, wavy hair that came down to her shoulders. She spoke with a slight Brooklyn accent. Well-endowed, she wore skirts and dresses that flaunted her figure. You'd never see her wearing slacks. She balanced on sharp-pointed high heels. When she walked, men followed her every movement.

You ask, how in the world would a fancy lady like Lisa hook up with a loser-geek like me? Well, I think it's because I was in the news business, too. Also, I was non-threatening because I wasn't attractive like the slick news anchors who were always undressing her with their eyes.

Just before I got to KRON's front door about half past seven that night, I called Lisa's cell.

"It's me, Rick. I'm outside," I said. "Just like you predicted, it's chilly, clear, and a great night to see the Milky Way from the dark boonies outside Livermore."

"It'll be fun," Lisa said. "I hope you don't mind. I brought along somebody else, too."

"What do you mean?" I asked, thinking she'd brought a chaperon. I took a quick swig of Jack Daniels from my hip flask.

"Charlie's with me," she said. "My miniature poodle."

"Can he hold it?" I asked. I didn't want a dog, even a small one, relieving himself in my vehicle.

"He can last all day without an accident," she said. "Sorry. My dog sitter got sick at the last minute."

"That's okay," I said. I was glad the weather had cleared up for us after Monday's heavy rain. I looked forward to showing Lisa the stars. For once I hoped the night would be quiet with no big, breaking stories like murders or massive fires.

"I'm off for a week and a half," Lisa said, "so you don't have to worry about keeping me up late in case you have to cover a story."

I pulled to the curb. Lisa Grotz exited KRON's front door. She led her poodle on a leash that was way too long for the small dog. It had brownish-white, curly fur and looked especially tiny next to Lisa.

Lisa got in the front passenger seat. Charlie hopped onto her lap and then leaped into the back seat next to my mini-cam, which I'd put there to make room for Lisa up front. I hoped he wouldn't claw the camera controls.

"You sure have a lot of scanners," Lisa said, as she gazed at the flashing lights on the three radios I had bolted into my dashboard. They were searching the police and other emergency channels for two-way radio calls.

"Yeah," I said. "I need 'em because nobody at the station is monitoring the radios at the assignment desk after midnight."

"How long have you been doing this?" she asked me.

"About six years. I started at KGO just after I got out of journalism school at Northwestern University." Suddenly my mind wandered, and I began to think about how pale I was for a Californian. Like an owl, I was active mostly at night. My colleagues called me the Knight Prowler in the newsroom behind my back. I didn't like that, but what can you do? Snapping back to reality, I said, "I need to get us to Livermore before a big story breaks. Otherwise, we might not have time to see the stars."

"That'd be okay, too," she said. "I always wanted to see what being out in the street is really like." Lisa smiled and patted my right shoulder as I stepped on the accelerator.

Traffic was fairly light. I liked to speed -- still do. In about an hour I exited Interstate 580 onto Livermore Avenue and went north until it became Manning. There were ranches along the sides of the country road, and the night was coal black except for the occasional light that came from houses and headlights.

I turned right onto Morgan Territory Road, near the Contra Costa County Line.

"I can already see the stars," Lisa said, looking out of her side window.

"It'll be better when we find a spot to stop," I said. "Right now, though, I need to see a little better." I switched on my brights to make sure I didn't run off on the shoulder and skid on pebbles. We came to a gravel road, and I turned right onto the narrow lane. I drove up and over a hill. That's when we saw flashing blue police lights about two hundred yards ahead.

"It's a crime scene," I said as I slowed my vehicle. Nuts, I silently said to myself. I pulled off the road, taking care not to go into a deep, muddy ditch. But the truth is I can drive drunk better than most people can drive when they're cold sober. The ground was still wet from the heavy rain we'd had the night before. I parked not far from a barbed wire fence. "Looks like we won't be studying the stars."

"I wonder what's going on," Lisa said. From her voice I could tell she was excited. Not all was lost.

"We'll soon find out what went down," I said. "I'm sending my night-vision drone out there. We'll see the picture on the dashboard monitor."

"Yeah, it's on the roof," I said. I pushed the launch button on my control panel.

"Do the police let you do that?"

I peered at the screen while I remotely guided my nearly silent drone above the crime scene. "That's my brother," I said to Lisa, as I pointed at the picture. "He's a detective." I squinted, studying the image on the small TV monitor. "The Livermore Police must have been called in to help the County Sheriff. They have a mutual aid agreement. Look; there's the body."

Using my joystick, I hovered the craft and zoomed the lens in as far as I could while still keeping the picture steady. The body was behind some tall weeds along the road. The area was well-lit by police floodlights.

The speaker on my dash hissed as the drone's sound system automatically adjusted its audio level. "I know that's you, Rick," my brother John yelled up at my drone. "Come on over here before I send a squad car after you!"

John sounded irritated. I flashed my headlights twice to signal a "yes."

"So your brother's a cop?" Lisa asked.

"Yeah," I said. I landed the drone about a hundred feet from the scene on a barren hilltop. "Do me a favor, and don't tell anybody about what you've seen here and that he and I are brothers, okay?"

"Sure thing. I won't tell anyone." Lisa looked surprised by my request. I just hoped she was true to her word.

I drove the Rover slowly down the road. The gravel made crunching sounds as I arrived at the scene. I stopped near a yellow police tape that circled the body of a man who was dressed in an expensive-looking, but dirty, blue suit. The deceased was mostly concealed behind a thick clump of weeds in a muddy ditch close to an electrified wire fence. I figured that the rancher who owned the land along the road kept cattle. A police car's spotlight helped the floodlights to illuminate the scene.