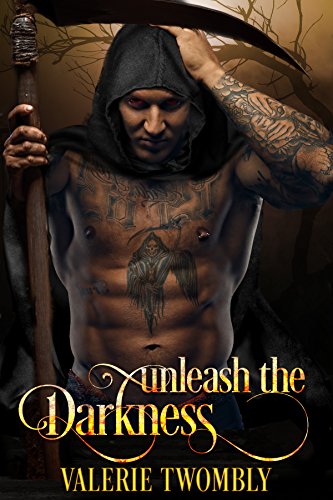 Sometimes even a reaper fears the darkness.

Created from light and dark, Sephtis is bound to both Heaven and Hell. When he calls upon his reaper, he unleashes a power even demon's fear. Only Evangeline keeps him from crossing over to total darkness. His mate is the light that burns bright in his soul.

Being a guardian angel is all Evangeline ever wanted. Then a promise to a dying woman changes her life completely. Finding herself trapped in a foreign land, she must fight for her life while searching for a way back to the man she loves.

When a stranger comes between the couple, the two angels become entangled in a web of evil that will put their love to the ultimate test. Hell hath no fury like a reaper determined to find the woman he loves.

Seph looked at the recently fallen angels beside him and shook his head. They had no idea what they were in for.

“I’m going to check the perimeter. You two keep a watch here. If you see anything suspicious... Yell.” Lyzander had already taken off to rescue his mate while Seph waited outside with Cade and Raze.

The two nodded and Seph took off, heading behind the small cabin where Aezyla was holding Kelana hostage. When he rounded the corner, he spotted two demons, weapons at the ready. Clearly, they were about to lay ambush to his brethren on the other side, and Seph was having none of it. Feeling feisty, and wanting to get home to his mate for an evening of sport fucking, he unraveled his senses to reach out further. There were at least several dozen more demons lying in wait along the ridge of the mountains a few yards away. This was definitely a trap, and they were outnumbered six to one. There was only one way to even out this little soirée and make sure the others stayed safe. Seph summoned his solid black wings, and his transformation into a reaper began in a ripple across his body.

He didn’t need a weapon to take care of demons in this realm. They were at the bottom of his food chain, and his mere presence was enough to scare most of them shitless. A reaper’s power was twofold in Hell.

Wind whipped up, catching his robe sending sails of black fabric to trail behind him as he headed closer to the enemy. Pointing a now bony finger, he said, “I would reconsider your options.” His voice, now several octaves lower, was also edged with an evil that made mortals shiver.

The two demons looked up, their eyes wide. Both dropped their weapons on the ground and took a step back. “Reaper. We mean no harm,” one replied in a shaky voice.

“Then I suggest you flee. Now!” He leaned closer and spread his massive wings. The two in front of him turned tail and ran. Seph called forth several fireballs and launched them at their heels. They would be sure to get the point and not try to return if they wished to keep their heads.

With those two gone, he set his sights on the remaining demons. Seph moved across the rocky landscape. His reaper boots never touched the ground as he floated to where the others hid. He drew closer, the evil and darkness swirling around him and soothing him like an old friend. He allowed it to flow inside him, become one with his soul. It filled him with power so raw and dark, he swore he could destroy the world. Maybe he could, but there was still a small spark of light. The one that kept him from going totally over the edge and always brought him back. He loved feeling the darkness as it flowed through his veins, and being in Lulerain, the pits of Hell, only fed his hungry soul. Every time he unleashed his darkness, it became more like an addiction. Harder to step away from when the job was done. It was the ultimate high, but if he let it, it could turn him into the most vile creature to ever walk the earth.

Pushing toward where the others hid, he noted several Baenor demons slithering behind him. In the human world, they would be akin to a twelve-foot cobra, only with much larger fangs and eyes that sparkled like amethyst. For some reason, reapers were like the pied fucking piper of the Baenor in Hell. Suited him just fine considering the only other beast feared more than a hellsnake was a hellhound. They both had ferocious appetites.

Hovering only feet away from where a small army of demons hid among the boulders, Seph chuckled to himself. The demons remained silent. Probably hoping they would go undetected.

This time he laughed out loud before he launched several fireballs toward the rocks. A few screeches and several curses were shouted back his way, but the demons held their ground.

“Fine. I love a good torture.” Seph pointed at the two Baenors on his right. “You two”—he waved his hand toward several large boulders—“circle that way and give no mercy.” The snakes sprang into action. Their massive heads held high in the air and their tongues flickered out to taste the scent of their next meal. It didn’t take long for the snakes to strike and paralyze their victims. Even Seph had to turn away rather than watch the feasting. Besides, he had his own demons to fry.

A demon to his left threw a blade aimed at Seph’s chest. Seph let loose a blue arc of power that lashed out like a lasso and wrapped around the demon, squeezing as it burned through the skin, muscle and bone. The creature’s screams and the stench of burnt flesh filled the air and seduced the reaper. It wasn’t often he got to torture. Mostly he scared the shit out of humans then escorted them to their not so happily ever after. This proved to be too much fun, and he was happy they had chosen not to run like the others.

When several demons decided to try and escape, he summoned his scythe. The blade’s edge glistened in the night’s sky, revealing its readiness to cut through bone like butter.

Three heads left their bodies and flew through the air, landing with a hard splat on the rocky ground. The rest of the army ran and Seph raced behind them, mocking their weakness as they fled deeper into the mountains. Satisfied there was no more threat, he took a long deep breath and forced his body to absorb his wings. With another burning lung full of air, he began the painful transformation back. Flesh grew cell by cell over his bones at a rate so rapid it sent him to his knees. His jaw ached from clenching it through the pain. Within seconds, he was back to looking human. All traces of the black robe now replaced with the jeans he had donned earlier in the day. He pushed to his feet and stretched his neck, bones snapping back into place, then headed back to where he had left Cade and Raze. Halfway there, he stopped abruptly and scanned the area, swearing he felt the oily slickness of evil slide across his skin, but when he searched there was nothing. Shrugging his shoulders, he moved back toward the cabin.

Must be an after effect. He’d only ever been in Lulerain a few times and had discovered his reaper was far too comfortable here. It was why he hadn’t returned to the pits since he’d met Eva, the true light of his life. His mate kept him sane, and he knew if anything ever happened to her, there would be nothing to stop his darkness from taking over. Heaven and Hell help them all.

As he approached, Lyzander had Kelana in his arms as the angel stormed out the door.

“Let’s get the hell out of here,” Lyzander said and Seph couldn’t agree more.