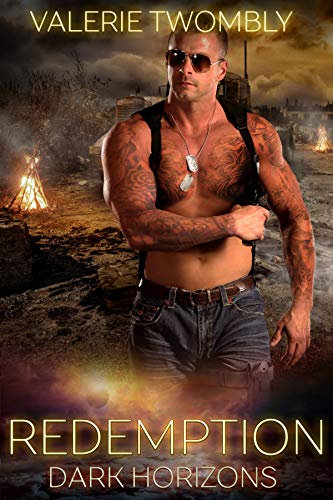 This is a spin-off series and can be read as a standalone or, with the Eternally Mated series.

He was promised redemption, but it wasn't what he bargained for.

Decker has everything a man could want in life. That is, until a demon named Arsenia decides to turn him into a vampire. With his life left shattered, the ex-Navy Seal is forced to make a deal with an archangel. The Red Death has spread across humanity and his new abilities are needed to help those who survive. All he has to do is complete the biggest mission of his life, then redemption will be his.

Emma was born with the gift of helping others. Her immigrant father worked hard to send her through nursing school and couldn't have been prouder when she landed a job in a big city hospital. All that is gone when the plague hits. Emma finds herself scared and alone with one tiny survivor. Rescue is a welcome relief, that is until she finds herself longing for a man who promises to break her heart.

The rule book has been tossed aside in this new world. The plague continues to change, and no one knows what the next wave will bring. Emma believes her and Decker belong together and she's willing to fight for a chance at love. However, he has no desire to travel that path again. Emma is changing and without her fated mate, she may not survive. History appears to be repeating itself, but this time Decker has a chance to alter its course. If only he can face his demons.

The world has been sent into turmoil. Millions will perish and those who survive will become hope for the future. A new and very different world will emerge and this is how it all began…

Arsenia kept to the shadows, still unsure of where she was, or even who she was anymore. The world had changed since she’d been put to sleep several centuries ago. Her father, the Inca king, had decreed she would sleep until they found a cure to save his only daughter from death. That she walked, led her to believe that day had come.

She vaguely recalled her slumber, but her resurrection was an event she would not soon forget. An angel had come and woken her and the first thing she’d done was bite him. Her mind had been filled with only one thought and that was to drink. She needed blood and his had tasted like the heavens with a tinge of darkness. There had been no time for shock at her actions to settle in. It was only after she’d sank fangs into his flesh and had her fill that she ran. Fearful of what she had done, she had gone into hiding. It had only taken her two days to recall what her mission was. The demon, who put her into stasis so long ago, had given her the vision.

Arsenia was to be reborn a vampire. An agreement she had tried to argue against, but he had said a higher power chose her. It was a vision she’d had a hard time digesting considering he was a demon. Now, she was awake and nothing could be done about it. Deep in her soul, she had a need to fulfill. The mission was crystal clear to her now and needed to be carried out without delay. Choose four prime male specimens and change them. The demon said she would know who if she followed her instinct. He’d also assured she would know how.

When asked what the purpose of this mission was, the demon replied, “The four will be the first, the primordials and they will help save the world. Or, what will be left of it.” He’d laughed then refused her any more information than that. So, here she was. Clinging to the shadows and stalking prey like some wild animal and all while the prince of darkness was hot on her heels. It hadn’t taken her long to figure out who he was and he was desperate to catch her and not for anything good. He would lock her away for the deeds she performed now. Of that she was certain.

Arsenia must fulfill her mission then hide. It was to be her life and she supposed she’d earned it. Exchanging death for a chance to live. The demon had never promised her resurrection would be filled with days of royal pampering. That was now a distant memory.

Heels clicking as she crossed the street, she stepped into a place called a bar. She had studied up on these social drinking establishments and found them fascinating. Thankfully, her demon had left her with the ability to adapt to the current decade. She slipped onto a stool, ordered something called a hurricane then glanced at the table in the corner.

It was her luck that the four men who sat there were who she sought. Four perfect specimens of well-defined muscle and rugged good looks that would stir any female’s sexual desire. Had this been during her reign, she would have made these men her personal guards and play toys. As it were, they were the chosen. What the people here called a Navy Seal who excelled at their job. Perhaps that was why they were to be turned? She was to sire the primordials and they would sire more vampires. The order was not for her to question, only do what they had forced her into. Now that she had them in sight, it was only a matter of days before she would make them vampires like her. Like it or not, it was what they were all destined to be. She hoped what the demon had said was true, for her newly honed instincts spoke of much death to come.

The world was about to plunge into darkness.

Rhea scanned her surroundings. Since she had studied the human realm for many years, it was easy to determine they were in Peru. Aramu Muru, a sacred place where the Gate of the Gods was carved into the stone. The gate had been dead for centuries. The fact they were here now was a distressing sign.

“By the time anyone discovers you––if they can even get near the place—it will be too late. If you should survive this, I’ll be back. I have big plans for you, so make sure you do survive.” Her captor laughed, and she wished for a blade to gut him.

She would survive, and she would get free. She was an angel, created by the hand of the Almighty himself. That had to count for something. Right?

Mark pulled the cuffs from her wrists. She tried to plant her fist on his jaw, but was too weak, and he was stronger than before. With a snap, he broke her arm, but she refused to cry out and give him the satisfaction of knowing he hurt her. Instead, she spit in his face.

“Fuck you.” Was her soul now tainted from the hatred she felt?

“Oh I intend to do that too. You just hold tight, sweetheart, and I’ll be back for you. Then I plan to have you every way possible.” He shoved her against a wooden pole sunk into the ground and jerked her arms behind it, securing them with the cuffs. He then took a length of rope from a bag and began wrapping it around her, binding her to the pole.

Sweat trickled down her temple as the pain of her broken limb caused her vision to skew. Rhea refused to succumb. She drew on years of training and sheer determination and shook the fog free. She had to be strong for the child she carried inside her. Certainty that her son still lived was her driving force.

Mark ripped the front of the red gown she wore, exposing her breasts. Producing a knife, he began to carve symbols on her chest. Biting her lip, she tried to draw strength from the pain. Words in ancient Latin spilled from his mouth and when she realized what he was saying… What the symbols were...

There was no stopping it. When he’d finished carving three symbols into her skin, and her blood welled to the surface, trickling down her belly, he stepped back. When the last word was uttered, a flash of white light filled the gate. A rumble shook the ground beneath her and suddenly the gate opened, filled with swirling blackness. The box Mark had set a few feet away exploded, and in its place stood the one man who had set this catastrophic event in motion.

Rhea struggled to free herself, but it was useless. She was already weak and grew more so as her blood coated the fabric of her dress.

Lucifer raised his arms into the air and shouted. The words he spoke were a language so old she wasn’t sure she interpreted it correctly. One thing was certain, he now owned the Gate of the Gods, and she watched in sheer horror as demons stepped through. Not just any demons, but the dregs of Lulerain.

Lucifer had opened his gate directly to the pits of Hell, and now the worst of the absolute worst of evil spilled from its doorway. When Rhea thought it could get no worse, the most gorgeous man she had ever laid eyes on filled the gateway with his muscular form. His long raven hair lifted in the breeze, and his golden eyes surveyed the area with that of a predator before they landed on her. Her heart nearly stopped.

“Morbus,” she whispered. Latin for disease, he was aptly named.

Humanity was about to face its biggest test ever and millions would perish.