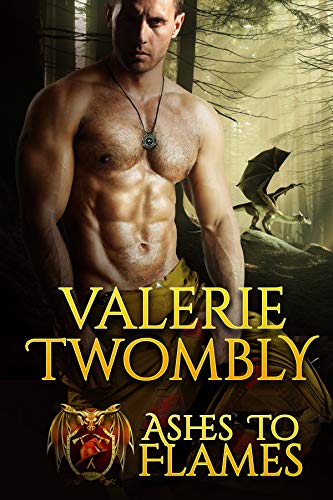 Learning to trust is something Reese can't seem to get a grasp on. Every time he tries, he gets burned. When sexy Brooke walks back into his life, the firefighter puts up a wall of resistance that will keep him from making the same mistake twice. Problem is he loved her once, and she walked away. Now she's asking for forgiveness and he's not sure he can give it.

Being a mix of dragon and human presents its challenges. Even more demanding is Brooke's shifter father who she can't seem to say no to. When an unforeseen event forces her to run away from love, and back home to daddy, she doesn't think she will ever see Reese again. Coming back to Kirkwood means facing what she left behind and questioning what her future holds.

Old emotions threaten to resurface, but things are more complicated than before. Reese can't forgive and Brooke's father demands she marries someone else. Trust and loyalty rip these two apart, but sometimes it only takes a spark to create a flame from ash and change destiny forever.

THIS BOOK IS A STAND ALONE STORY.

Lore of the Wicklow Dragons

Once, many millennia ago. Before man was even a twinkle in the universe's eye, a creature of vast power and greatness ruled the skies. They were called Dragons. These majestic creatures thrived in an area they called Wicklow Mountains of what would later become known as a part of Ireland.

The cool, moist climate was an ideal place to raise their young and soon the dragons became a species of thousands. Their society ruled by one who held the most power and magic. Their silver queen, Ophi.

For years they lived in peace and prospered. Even after the birth of humans, they remained safely tucked away and bore witness to much of the world's history. It wasn’t until the great Pharos that the first dragon fell by a human hand. Thus, began the slaying of the world’s most beautiful creature and the end of a race. When Ophi found herself the lone survivor, she realized her species had become extinct. She could either go on a rampage and end humanity or she could fight for her specie’s survival. Ophi allowed logic to dictate and pulled magic from every corner of the universe. The silver queen turned herself human, thus killing the last dragon herself.

Now one among her people’s slayers, she blended in and found a husband. He was a good man, and she bore him several children. As her offspring grew, she soon discovered they held some of her magic and a new species was born.

A human able to call forth the power and magic of their dragon mother and turn into the once long-gone majestic creature. Each child was born with different abilities and special powers. To keep her children safe, Ophi decreed any who shifted in the presence of a human would bring forth not only their death, but that of any human present. It was a law the queen despised, but upheld with swift enforcement. She had to set the example. She had to save her species in one form or another. It was also why she chose each child’s mate. To ensure the best genes in their offspring.

As each of Ophi’s husbands aged, it forced her to fake her death time after time. But with each human husband, she increased the number of shifter children. Those children mated with other humans and to each couple more shifters were born. It seemed Ophi had not only saved her race, but enhanced it. They could live among humanity and when alone, they could become free once again to fly across the vast skies of their homeland.

On Ophi’s deathbed, she selected several offspring and swore them to uphold her laws and protect her word. They became known as the elders. When Ophi finally passed at nine thousand years of age, the universe reclaimed her magic. She had done her job as queen and protected her people. The universe would hold her power and magic until a time when it was needed once again.

The shifters flourished for many centuries and remained hidden from society. As time went by, humans began to realize what lived among them. It frightened some, but most accepted shifters and learned to live and thrive together.

Then the plague hit. An illness that wiped out nearly all shifter females. With thousands of males and few females, it forced the men to look to humans once more to save their race. This time the universe wasn’t so kind to them. Only the males were born full shifters while the daughters were born human or what they referred to as a halfling. A female that held special abilities, but was not a shifter. It was a rare occasion for a full-blooded female shifter to be born.

The dragons continued on best they could and held onto their long-lost queen’s laws. Shifting was forbidden in front of a human and fathers carried on arranged matings for their sons and daughters. It was a matter of survival once again. It was a matter of waiting for the lore of Ophi to come and save them. Would the ancient scrolls written by a long-lost queen ever come to fruition?

One future day, my magic will once again take form in the birth of a child. This daughter will be the silver dragon. She will be your queen. My magic, her magic. My power, her power. Her word will be dragon law. My people will kneel before their new queen and know that I have returned to them.