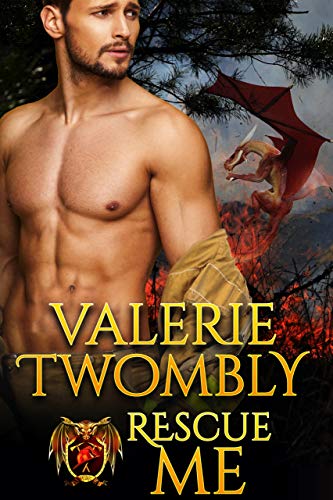 Fighting fires is in Derrick's blood. Left shaken after the tragic loss of his best friend, the event forces him to realize he can't afford to care. Love has cost him everything and the pain has him vowing to never suffer such heartache again. When he tries to start over in a small northern town, a beautiful woman steps into his life and pushes every boundary he sets in place.

Being a full-blooded dragon shifter makes Halee an anomaly among her kind. With her eldest brother pressuring her to choose a mate, her loyalties are torn. Turning to a stranger for the night, she hopes to forget the fate she must face. But when the stranger, Derrick, shows up as the new guy at the station, Halee must choose between duty and stability or a man whose kiss unleashes a passion she never realized existed.

Both were looking for escape, but neither expected to find each other. Every heated encounter pulls them closer together. When fire strikes again, it will leave Derrick facing the ultimate choice: break his vow or walk away from Halee forever.

THIS BOOK IS A STAND ALONE STORY.

Smoke, thick and deadly, rolled into view as the squad rounded the corner. The darkness of the late hour interrupted by street lamps and the flashing of red and blue lights. Derrick Taylor stared out the window and thought back to his academy days and a conversation he’d had with his old man.

“Dad, were you ever scared?”

His father had stopped cleaning his gear and gave him a serious look. “Every call. Son, the day a firefighter stops fearing is the day he needs to retire.”

His old man’s words rang through Derrick’s mind every time a call came in. Words he’d lived by for the last nine years and often recited to the probies he worked with. You couldn’t allow fear to consume you or it took control. A firefighter always had to keep perspective. His own fear still sat with him and offered a sense of peace. He shoved it out of the way, allowed the adrenaline to pump, and put his mind into work mode just as he had so many times before. This was what he did. What his father and grandfather before him had done as well. It was in their blood.

When they rolled to a stop behind the engine, he studied the two-story home in front of him as he and Davis jumped from the truck. Smoke squeezed from any crevice it found and billowed into the air. Flames made an escape through a section of the roof toward the back of the house.

“Fire’s in the attic, but we don’t know where else,” Chief Warren said. “Taylor, you and Davis are going to have to go in. Neighbors claim no one has seen the residents, so we have to assume they are still inside.”

“Got it, Chief,” Davis replied.

Derrick opened the compartment that held his lifeline and slipped the tank over his head until it settled against his back, giving it a quick adjustment before securing the clip around his waist. Possible victims inside meant no water would be put to the flames unless absolutely necessary. If anyone was in there and still alive, the heated steam from dousing the fire would kill them for certain. He and Davis had to move quickly. With only ten to maybe fifteen minutes of air, both their clock and that of anyone inside was ticking.

A jab in Derrick’s arm had him looking to his partner. Davis pointed, and Derrick’s attention swung to the kids’ bikes left in a haphazard pile in the driveway. His adrenaline rose as he prayed for the house to be empty.

Derrick and his partner grabbed the ladder. Hauling it across the yard, they smacked it against the aluminum siding to the left of the second story window. Likely a bedroom, it would be secured first.

Derrick ascended the ladder until he was close enough to break the glass. With a swing of his ax, he aimed for the top pane of the window closest to him. After several forceful hits, he had enough glass cleared from the frame to crawl through.

“I’ll be right behind you,” Davis replied below.

Derrick rolled into the room and over fragments of glass as he began to crawl. The smoke was quick to snake its way past him in search of the opening he’d just made. Visibility was nil as he felt his way along the floor. Moments ticked by before he heard a thud.

“Status,” Command crackled over the radio.

“Smoke’s rollin’ in, but no fire in this room,” Derrick replied, though the beast could be heard rearing its ugly head just outside.

“Tanner’s team is venting the other side and performing a search. Be prepared.”

“Copy, Command.” The warning issued, Derrick kept moving. “Davis, we better clear this room.” As soon as the words passed his lips, he bumped into something. Reaching out, he realized it was the bed.

“Found the bed,” he called out to Davis. Feeling his way, he finally hit pay dirt. “Fuck! I’ve got a foot.” Derrick gripped an ankle and pulled.

Derrick was thankful he didn’t have to extract and carry down the ladder. This meant he and Davis could continue their search. He lifted a soft body––curves indicating a female––over his shoulder and made his way toward the voices now yelling from the window. Smith reached and pulled the female from Derrick’s hold.

“Got one!” Davis yelled behind them, and Derrick turned to help his partner. The light from his helmet pierced the darkness, and the now clearing smoke, to catch Davis struggling with a man twice his size. Together, the two managed to get their other victim in the bucket with Smith, who headed back to the ground. Once the room was cleared, Derrick and Davis made their way to the door then into the hall. Fire consumed the landing and stairs, cutting off the lower floor. Part of the ceiling had already collapsed, allowing for a partial view into Hell itself.

“Command, the stairs are a no go and we have a partial collapse,” Derrick said. “Tanner’s team?” He hoped the others were successful in their rescue.

“Found nothing. They had to pull out.”

“We’ve got to clear the other rooms. I’m going, Taylor. There may still be kids in this house.” There was no missing the panic laced with pain in Davis’s voice. He had two kids of his own at home. His son Josh had just celebrated his third birthday, and Emily would be starting school in the fall.

Burning debris fell, missing Derrick by inches. “Fuck. Command, we need a line up here now!” There was no longer a choice. This fire had to be tamed before it took them all out.

Shit! Command must see something outside that spelled bad news for them. Could it look any worse out there than it did in here? He and Davis had already made their way down the short hall. Looking behind him, there was no going back the way they came. Debris had fallen, and fire claimed the space where they had once been.

“Command, our entry point’s blocked. We’ve got to find another way out.” Derrick knew those were not the words the men outside wanted to hear. He’d been on that end. Holding his breath waiting for his brothers to emerge, praying the entire time. This time his prayers were for Davis and himself as they searched for a doorway. If they could get into one of the other bedrooms, they could bash out the window and hopefully make their escape.

A deafening roar filled the air, and Derrick flattened to the floor as the inferno rushed over his head.

“Davis?” he called out, but there was no response. Fire surrounded him as he belly-crawled, searching for his partner. Clicking his mic... “Mayday, mayday, mayday from truck sixty.”

“This is Command, go ahead with your mayday.”

Cracking timbers came from above Derrick, followed by a sharp pain across his legs. He tried to claw his way out but was pinned. If that wasn’t enough to fuck up his day, his mask vibrated.

“Ten-four, we have rescue coming to you.”

Derrick searched for his years of training and tried to find calm, clicking his mic again. “Command, this is firefighter Taylor. I’m pinned and running out of air in the hallway.” He activated his PASS then took a breath, counted four seconds. Held it then slowly let it out, again he counted four seconds. Fighting the urge to inhale, he repeated his exhale, expelling as much carbon dioxide as possible.

“Copy that. Activate your PASS.”

The pressure on his legs grew, making controlled breathing difficult, but he pressed on. Remained calm and trusted his brothers to locate him and Davis, despite the fact that he was literally in Hell on earth. He would only make radio contact if necessary.

Thinking of his father, he wondered if the same thoughts of life and death had passed through his dad’s mind during the man’s final moments. Had the man Derrick looked up to his entire life suffered? Or, as Derrick had always hoped, had his father died quickly.

An eternity slipped by before he heard the shouts of the others and realized they were close. Colorful spirals filled his vision as he tried to suck from an empty tank.

The same fate as my father, he thought as he was sucked into the depths of darkness.

Derrick stared into the sink, his knuckles white as he gripped the edge of the counter. When he finally lifted his head to gaze in the mirror, disgust stared back at him. The chief’s words still rang in his ears.

Derrick’s grip tightened as he ground his jaw and fought to control the emotions bombarding him.

He was pissed at Davis for not hanging on. For leaving Derrick the sole survivor.

“You fucking coward, Davis. How dare you take the easy way out.” His arms shook until he finally released his grip on the granite. Grabbing the towel, he wiped his face then tossed the terry to the floor before he stormed from the bathroom. He stopped short, staring at the dress uniform laid across the bed. The last time he had pulled it out was when his father had died in the line of duty. Jeremy Davis had been at Derrick’s side when he’d buried his father, the last of his family. Today, Derrick would lay his best friend to rest.

Memories of Sarah Davis and the tears that filled her eyes when he had personally gone to give his condolence kicked him in the chest, taking his last breath. The words were unspoken, but he knew her thoughts. Why had her husband died while Derrick survived?

He wanted an answer to that question as well.

It wasn’t his time, didn’t cut it for him. Derrick had no one to mourn his death, but Jeremy did. As he picked up the photo of himself and Jeremy on a fishing trip last year, he swore a vow as the pain in Sarah’s eyes came back to haunt him. He was done getting close to people. Caring about them was a sure way to a broken heart.