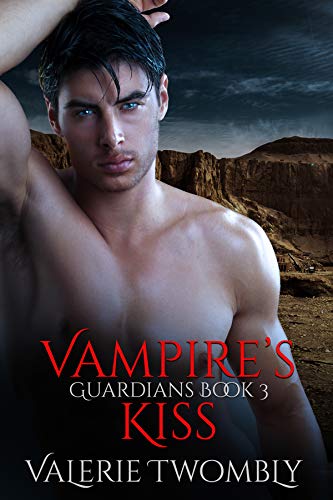 Being the first vampire Guardian ever created, Seth Ruiz struggles with his identity. While his sanity balances on a razor's edge, it's only a matter of time before he succumbs to the evil inside him. When realization strikes that the fiery Kaitlyn belongs to him, he must not only battle his past demons, but fight his desire to claim her or chance killing them both.

Handed a dagger as a child, Kaitlyn O'Hara has slaughtered demons her entire life. It should come as no surprise that she is also destined to save a crazy vampire. When fate reveals her true identity, she must search her heart for the courage to move forward.

Katie holds the key to help save humanity. With Seth's dark side edging closer, he prays he can keep it together long enough to protect her through the challenges she must face. However, he could prove to be her biggest threat.

He fights his desire to claim her. She battles to save him. Together they wage war to protect humanity. Survival may come at a price.

Temple of the Gods

Seth knelt at the feet of the man who towered over him. “How may I serve you?” He dared not look up at the one who called himself Zarek, but the god’s heated gaze stared at him with intent. Why glare at him? Did Zarek contemplate a deed he found distasteful? Seth had no idea what the man could be considering or how he ended up with his knees planted in the cold dirt of a land he didn’t recognize. His body naked except for the plain linen shendyt he wore. How do I know the name of this Egyptian garb? When he searched his memories, he realized he had few.

He scanned the area. To his right blackness filled the sky and fire crawled along the ground in a mad search for something. Perhaps it sought out the screams that filled the acrid air or it was the cause of them. On his other side were green rolling hills bathed in a soft golden light. While nice to look at, he found himself turning his head back toward the blackness, desperate to crawl into its depths. It whispered to him with promises of evil and destruction and caused his pulse to race. Something sharp punctured his lip and he winced. Instinct told him to show no fear. The man who towered over Seth radiated more than enough power to smite any who angered him.

A firm hand touched his shoulder. “Do not fear me, for I am your maker, your god.” The man smiled and it was then he noticed the fangs that extended from his mouth. Seth ran his tongue across his own points. The taste of blood caused his stomach to clench.

“It is called hunger. The pain you feel in your gut.”

“How do I make it stop?” He clutched his side to keep from doubling over. Show no weakness. Droplets formed on his brow and his body trembled. “If you are my creator, why this torture?” Was it a test of his strength? If so then he would endure.

“It is not torture, my son. Only the darkness in you.” The man turned his head toward the black void. “It calls to you, doesn’t it?”

He was unsure how to answer, so decided on the truth. “Yes, my lord.” Even as he spoke the words, he fought with every ounce of his being not to move toward it. Follow the fire. Find the ones who screamed and make them shriek even louder.

“That is because your birth has yet to be completed.”

He tipped his head. “I do not understand.”

A brilliant flash of light shimmered next to Zarek, and was quickly replaced by a beauty so bright, Seth forgot about the darkness that whispered his name. The woman wore a thin, white gown that showed every curve of her body. His mouth watered to taste the pink areolas that pushed against the fabric. He watched in awe when she moved her dark curly mass of locks away from her neck to reveal the beat of her pulse against creamy flesh.

“Come to me.” The siren’s voice beckoned.

He was unable to move, not sure of what to do, but the points in his mouth lengthened.  They ached and he dug his nails into the dirt beneath him.

“You must feed. Go to her,” Zarek commanded.

Seth crawled to her and gazed up. Her swirling silver eyes met his and she opened her arms in a welcoming gesture. He stood and stepped closer. Instinct kicked in and had him placing a hand on her waist and a palm to the back of her neck. She tipped her head. The pulsing vein sang of life, and death. Something inside him snapped, a primal hunger drove him and he sank his fangs deep into her throat.

Sweet, warm nectar filled his mouth and power flowed through his veins. A barrage of visions assaulted his mind, of a child running through a field of flowers. Laughter rang when a dark-haired man scooped the young girl into his arms and swung her in the air.

The man pulled her to his chest in a tight embrace and turned to face Seth.

The vision faded and Seth was pulled back to the woman he held in his arms. She was so soft he could spend an eternity caressing every inch of her. Their souls touched and emotions bubbled to the surface. He was desperate to keep her with him. Always.

Something was wrong. He pulled himself free from the pleasure and realized her heart slowed. Breaths grew shallow. She was dying. He fought to release her, but his muscles refused to loosen their grip. Panic set in. No! No, please don’t die. Why did she not push him away? Certainly, her father would stop him. Instead, her warm elixir continued to flow down his throat and caused him to embrace her harder. Her breathing stopped, followed by her heart. His sharp teeth retracted, but he kept his head buried in the soft flesh of her neck.

“No! Please.” He lifted his head and gazed at his god through tear-filled eyes. “You are powerful, bring her back.” He needed her warmth beside him.

Zarek shook his head. “I cannot. She chose her path.”

“She was innocent.” He spoke through clenched teeth. “I did not mean to take her life.” He cradled her head with care and laid her gently on the ground. He placed a kiss on her lips and let a tear touch her cheek before he turned back to his maker, determined to end his pain. “Slay me.”

Zarek crossed his arms over his naked chest. His biceps swelled until Seth thought the gold bands the god wore would snap. “No.”

Seth dug his nails into his palms and set his jaw. “You stood by and allowed me to kill your daughter. Why?” And why allow me to feel. I don’t want to feel this pain.

“You were created from darkness and evil.” Zarek waved his hand toward the burning fires. “In order to bring balance to chaos you needed the light. My daughter sacrificed herself to give you what you required.”

It was Seth’s turn to shake his head. “I do not understand. What am I? Why am I here?” And why do I have no memory?

“You have been born this day of dark and light. A guardian, a protector of humanity who will do my bidding.”

“How can I protect when I take life? You said I was evil. I do not think one such as I could guard another soul.”

“Your dark side will fight against those who intend harm to my children and the light will keep you balanced.” Zarek dropped his hands to his side and looked over at his daughter. Seth followed his gaze and had he not known better he would have thought her asleep. If only it were so.

“What was her name?” he whispered.

“Vivian. Among your many gifts, one will be to take the memories of those you feed from. You will see the life they have led and know their most intimate thoughts. You can discard them at will, except for Vivian. You will always remember my daughter and her sacrifice.”

Seth dropped to his knees at Zarek’s feet. “I will serve you well and honor her always.” I will carry her in my heart as long as I draw breath.

Zarek brought his own wrist to his mouth and bit. He then offered his blood to Seth. “Drink.” Even though he feared the same outcome as Vivian, he feared the god’s wrath even more, so he obeyed. The liquid scalded as it hit the back of his throat and his head began to swim. Knowledge loaded into his memory and became his own. The sudden realization of who and what he was hit him, as did the understanding of the evil he would fight and the people he was sworn to protect. The love of a father for his daughter mixed with Seth’s already burning emotions. A searing pain on his left bicep nearly made him release his grip on the god, but he knew he had to drink until commanded to do otherwise.

Seth released his king and looked to his arm where a marking in black ink had appeared. He frowned. A winged lion with a strange head and the outline of an eye above it colored his bicep.

“The sphinx represents the guardian of the king. Above it is the eye of Ra for Vivian.”

Seth straightened and shifted his shoulders back. “I am honored, my lord.”

Zarek tipped his head. “Good. Today we begin your training and soon your brethren will join you.”

He knew he should feel honored, but as he looked at Vivian he considered his birth already cursed. One he would have to fight for eternity.