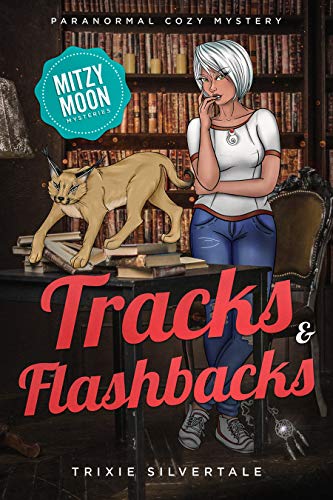 A touching gift. A shocking truth. Can this psychic sleuth solve a decade-old murder?

Mitzy Moon is happy to leave her painful past buried. But a thoughtful present turns her world upside down and forces her to abandon Ghost-ma and her fiendish feline to search for answers in the Southwest. Turns out her mom's death was no accident, and proving it could be the last thing she does...

Local sheriff Erick Harper wants Mitzy to have a loving remembrance of her mother. But after calling in a favor to get the dead woman's personal effects, he uncovers an unexpected skeleton hiding in the evidence. And now that the cat's out of the bag, he can't stop her from risking everything to dig up more clues.

Mitzy won't rest until she slams her mama's killer behind bars. And Erick is desperate to bring her back to Pin Cherry Harbor in one piece.

Can Mitzy deliver some Wild West justice, or will she bite the dust in the Arizona desert?

Tracks and Flashbacks is the ninth book in the hilarious paranormal cozy mystery series, Mitzy Moon Mysteries. If you like snarky heroines, supernatural intrigue, and a dash of romance, then you'll love Trixie Silvertale's twisty whodunit.

Buy Tracks and Flashbacks to thaw out a cold case today!

**For loyal readers of the series, rest assured that Grams, Pye, and Silas will all make appearances in this “out of Pin Cherry” adventure!