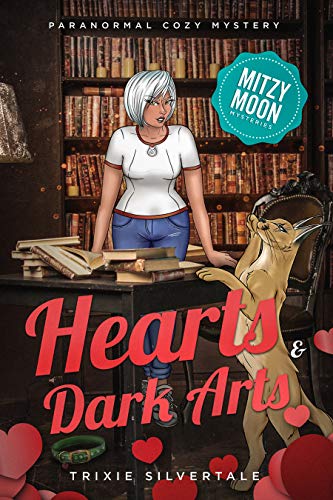 When a disappearing dog leads to a decades-old feud, will this psychic sleuth settle the score?

Mitzy Moon is bending over backward to be a good big sister. Spending a day at the pet invention convention seems harmless enough. But when puppy love turns into vanishing canines and a vengeful ghost, she'll have to bend a few laws before more furry friends are spirited away...

Ignoring the handsome sheriff's warnings about evidence that cuts both ways, Mitzy's desperation drives her to make daring decisions. Unfortunately, one crime leads to two and her carelessness puts Ghost-ma and her interfering feline in danger. And with her family threatened by dangerous powers, her dreams of a happy ending could become a ghastly nightmare.

Can Mitzy save the pooch and her grandmother, or will she be forced to make a deadly choice?

Hearts and Dark Arts is the twelfth book in the hilarious paranormal cozy mystery series, Mitzy Moon Mysteries. If you like snarky heroines, supernatural twists, and a dash of romance, then you'll love Trixie Silvertale's madcap caper.