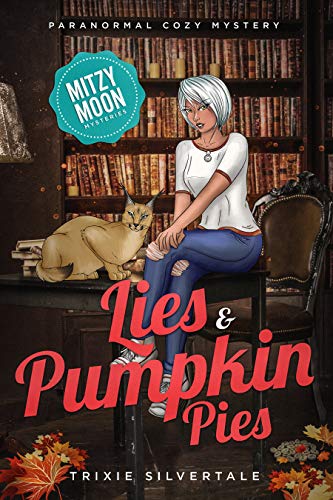 When a broomball rivalry turns deadly, can this psychic sleuth save the man she loves?

Mitzy Moon doesn't do sports, but girlfriends are supposed to try new things. And watching her handsome sheriff's team strut their stuff across the ice has its perks. But the thrill fades faster than cheap lipstick when the opponent's captain is found murdered, and her boyfriend is the prime suspect.

With no alibi, her main squeeze quickly loses his badge and gets tossed off the case—and the harder Mitzy digs for the truth, the guiltier he looks. She'll need the help of her interfering Ghost-ma and a spoiled feline to clear her beau and still have time to make a special pie for the holiday potluck!

Can Mitzy score a win for the home team, or will her dreams of a clean sweep be forever frozen?

Lies and Pumpkin Pies is the tenth book in the hilarious paranormal cozy mystery series, Mitzy Moon Mysteries. If you like snarky heroines, supernatural intrigue, and a dash of romance, then you'll love Trixie Silvertale's twisty whodunit.

Buy Lies and Pumpkin Pies to serve up a Thanksgiving caper today!