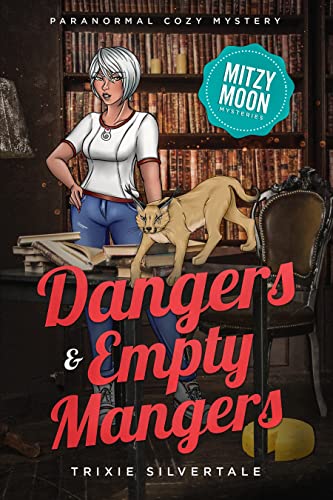 A frozen cheesemaker. A vandalized Nativity. Can our psychic sleuth serve up justice before she’s iced?

Mitzy Moon might be getting too comfortable. Her love life is satisfying, her family is supportive, and her extra senses are becoming more reliable. But, before she can bask in that glow, a suspicious death and a missing Messiah threaten to spoil the New Year…

Sniffing out the murderer of a local cheesemaker should be her guiding star, but there’s nothing as upsetting as a stolen baby Jesus. And with the trail growing smellier than a ripe Limburger, she’s desperate for help from her supernatural supporting cast. Unfortunately, with her powers now leading her in circles, she may have to make the ultimate sacrifice.

Can Mitzy peel the rind off the culprit before she’s prematurely aged?

Dangers and Empty Mangers is the seventeenth book in the hilarious paranormal cozy mystery series, Mitzy Moon Mysteries. If you like snarky heroines, supernatural misfits, and a dash of romance, then you’ll love Trixie Silvertale’s heartfelt whodunits.

Buy Dangers and Empty Mangers to curdle a killer today!