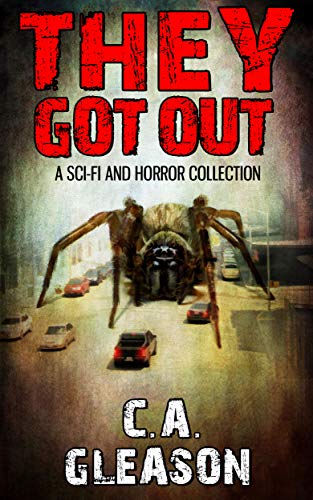 SCAREPLANE: He's supposed to save the world, but he just woke up in another dimension.

PENDING: The subject's journal details his life and lends insight into the boy before he turned into a monster. Before his destructive power brought the world to its knees.

THE HATRED: After agreeing to house-sit for a mysterious homeowner, a struggling musician starts hearing voices in the middle of the day and having nightmares so frightening that he screams himself awake. As he goes about the conspicuous tasks he’s being paid generously for, he begins to suspect he may not be alone in the house, and that there are plans in store for him more terrifying than he could possibly imagine.

Also includes five other stories about vigilantes, an alien threat, giant spiders, a possessed little girl, and even a zombie slaying granny!

When Keith opened his eyes, he knew something was off. He was wearing his day clothes on a bed, except he wasn’t in his bedroom. In fact, he wasn’t even in his own house. He was in his friend Kyle’s house.

He felt a dull pain in his arm and saw there was a cotton ball taped to it. He noticed there was a thing from the hospital, the contraption that sends fluids into your arm and keeps you hydrated. He couldn’t think of what it was called as his mind cleared from being asleep. It wasn’t hooked up to him but must have recently been.

Why was he here? He didn’t remember coming over and why was he hooked up to a…an IV! That was it, an IV. Why would he be hooked up to one of those? He definitely didn’t do it himself. He was trying hard to remember when he heard light steps down the hall. Whoever it was, they were trying to be quiet. Keith thought it was probably Kyle trying to sneak up on him when Kyle’s dad appeared in the doorway.

“Hey, it’s the other K!” Mr. Muller said. Mr. Muller called Keith and his son Kyle the two Ks because they were always together. “How are you feeling?”

“Fuzzy,” Keith said. “Where are my parents?”

It was as if Mr. Muller hadn’t heard what he’d asked him. “I don’t remember coming over.”

“Well you wouldn’t, not after you had the accident.”

“What accident? Are my parents all right?”

“Yes, yes. It’ll all make sense when you come downstairs.”

“Is that where they are?”

“Sure they are…Kyle too. Waiting for you. Come on then.”

Mr. Muller turned, looking over his shoulder as he did. When Keith made eye contact, Mr. Muller smiled. Something was wrong. Keith couldn’t put his finger on it, but he didn’t like the way Mr. Muller looked at him at all. He seemed to be acting and doing a poor job, like the kids in his school play.

Keith wondered what he was thinking. “Are the spiders still around?”

With that, he walked out. Keith didn’t want to follow him, except he wanted to see his parents. He hopped up as he normally would only it felt as if he’d been asleep for days. Everything ached. His legs felt weak, and he wobbled when he walked down the hall, as if he hadn’t eaten a thing in a month. He couldn’t remember the last meal he’d had and was extremely hungry. He felt lighter as if he’d lost weight. How long had he been asleep?

As he made his way through the house, Keith didn’t see any spiders. Maybe Mr. Muller wasn’t lying. Not in the way that Keith felt he had to sometimes, but the adult way that was meant to protect kids so they wouldn’t be afraid.

Keith heard Mr. Muller say something he couldn’t make out as he made his way to the basement.

After Keith entered, the door slammed shut behind him. A stench like nothing he’d ever smelled before hit his nostrils like a punch in the face.

His parents weren’t there. Neither was Kyle. It was just himself, Mr. Muller, and the spider at the far end of the basement.

It had built a web about eye level and it hung the way the other Hammock spider webs did. Hammock spiders are what Keith’s dad had named them, which made him laugh when he’d first heard it. The idea of a spider lying in a hammock was funny to him then. He didn’t find it funny at all now.

Mr. Muller’s friendly attitude had changed. His smile was gone. He looked at Keith as if he felt sorry for him.

“Where are my parents?”

Mr. Muller didn’t say anything; he just stared at Keith in the same way, as if he were waiting for something to happen. The spider moved its legs, stretching.

Both of them looked over at the movement, but the spider was hard to see. The only light came from the fire that burned hot in the furnace and shined through the glass, casting jagged shadows throughout the basement. Keith wondered what Mr. Muller was burning.

The spider was still, yet Keith got the feeling it was aware of them. Watching, as if it understood what was going on. It seemed smart, in a people sort of way. He noticed there were slick, wet sticks below the web. No, not sticks. Bones. They were bones!

Shivers ran down Keith’s spine. He realized what was happening. He understood why his parents weren’t anywhere to be found, why his friend Kyle wasn’t there, or Mr. Muller’s wife. The evidence was in Mr. Muller’s furnace.

“As long as I feed it, they leave me alone,” he said. He grabbed Keith by the arm and started dragging him toward the spider.

The spider sensed the scuffle and opened its legs wide, ready to embrace the incoming meal, revealing pale and dark splotches on its underside. Keith felt like throwing up. The spider was much larger than any Keith had seen before. Those first ones were big, the biggest on record, but not compared to this one. With its legs open, it was easily the length of a small car. Keith yelled and struggled against Mr. Muller’s grip but he was much too strong. Mr. Muller was a grown-up. A kid can’t fight a grown-up.

Keith saw the bones closer. There were many more than he could tell when he was across the room. There was a massive pile of them, even more behind the web on the floor and all around it. It looked like Mr. Muller had fed the whole neighborhood to this spider, and Keith was next!

Keith noticed there were some bones on a blanket nearby and even more in some boxes, as if Mr. Muller had attempted to clean them up or had wanted to take them somewhere else but changed his mind. That meant he’d been close to the spider when he was picking up the bones and it didn’t attack him. They had a deal.

Mr. Muller dragged Keith fast as if he just wanted to get it over with. Keith pulled as hard as he possibly could to his right, grunting as he did, sticking a foot out.

Whatever loyalty there had been between the spider and Mr. Muller went out the window when Mr. Muller went headfirst into the web. The spider engulfed him. Mr. Muller screamed but his eyes quickly closed. Keith could see that the spider had its fangs in his shoulder. His body went limp, and with all its legs holding him at once, the spider started wrapping him up in its web. Its host was now its supper.

Keith scrambled up the steps. He was about to head out the front door but he stopped. Mr. Muller had told him that his parents were downstairs and that he was at his house because he was in an accident.

Mr. Muller had probably taken him from his house after he’d gone to sleep. He had also said that there weren’t any more spiders. That was a lie too, so Keith went to the garage instead.