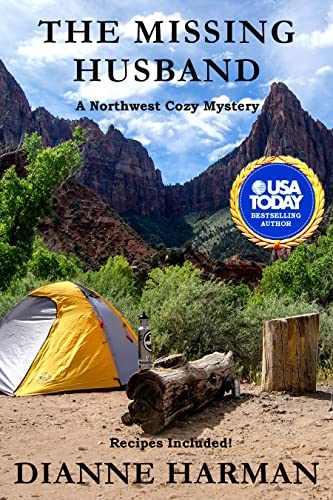 A troubled marriage,
A missing husband,
An early morning dropped call from him,
They all fuel fears for his safety.

When Jayne Bartlett walks into Al and Jake’s private investigation office and tells them her husband is missing, they figure it’s just one more case of a husband who needed a little time and space away from his spouse.

But when her husband, Corey, doesn’t return after several days, and his parents and friends haven’t heard from him, and he doesn’t answer his cell phone, red flags of alarm begin to surface.

And faced with the difficult task of solving the case of the missing husband, the last thing Jake needs is to learn that homes have been broken into during the day on Bainbridge Island, the island where he and his wife, DeeDee, live. She’s at home during the day. Could she be in danger? Would their dogs be able to stop a would-be robber?

When a friend of the missing husband gives Al and Jake a lead, they find themselves in a remote campground that serves as a trailhead for difficult hiking trails, trails they’re too inexperienced to take. At this point, there’s nothing they can do but put their trust in the forest rangers to find Corey, but they worry it will be too late.

This is the 20th book in the Northwest Cozy Mystery Series by a USA Today Bestselling Author.
Read more

It was early Saturday morning, 4:00 a.m., to be exact, when he loaded the last of his things into his car and quietly closed the car door. The houses in the neighborhood were all dark, the residents inside still cozy in their beds while he snuck around inside and outside of his house. Even the moon seemed to be holding onto a few secrets, since only a sliver of its pale yellow light could be seen from between the trees. It was as if it didn’t even want to see what he was up to that early in the morning. Guilt tried to work its way into his heart, but he pushed it away. He needed to do this.

He wasn’t exactly sure when he’d made this decision to pack up and take off. Truthfully, he wasn’t even sure how long he was going to be gone. All he knew was that he couldn’t take it any longer. The walls felt like they were closing in on him. Every time he tried to take a breath, it felt as though he was trying to breathe with a pillow pushed down over his face.

And the way he and his wife had been arguing lately, he couldn’t stand it. It seemed like they were always at it over something. Who should take the trash out, who should unload the dishwasher? He couldn't live like this. Not any longer. He needed to get away from it all. Clear his head and take some time to sort out his thoughts.

Maybe then he’d be able to have just one single thought that didn’t feel like it was wrapped in someone else's expectations. He hated expectations. No matter what he did it was never enough, because it didn’t hold up to other people’s expectations.

But that wasn’t the way it should be. This was his life, and he needed to figure out what to do with it. The only one who seemed to halfway listen to him was his best friend, Kannon, but even he’d been telling him to stay put and just cope with the way his life had turned out.

After all, he was here because of the choices he’d made, all by himself, with nobody else to blame for the results. Now it was his turn to live like he wanted to, even if it meant he was just going to barely survive. But he didn’t want to just survive. He wanted to thrive. He needed to thrive.

Climbing behind the wheel, he started the car and hoped the noise from the car’s engine wouldn’t wake her up. He wanted to be far away from her before she started calling his phone. He didn’t know if he could go through with it if he wasn’t. Maybe he should shut his phone off, at least for now. At least until he got out of town.

He hadn’t told anyone where he was going. He couldn’t. Truthfully, he wasn’t sure if anyone would understand why he was doing this, and to be honest, he didn’t really understand it either. But once the idea had made its way into his brain, it had been impossible not to follow through with it.

Maybe this would help him figure out exactly what he wanted from life. Maybe he’d only be gone for a day or so, but then again, it could even be longer. Part of him wondered if he could just leave and never come back. What would it be like to start a new life? Begin over and leave behind all of his mistakes and frustrations. Would they eventually find him? And could he really do something like that?

There was a certain thrill to that thought as he put his car in gear. Just leaving and never coming back. Could he give it all up? Or would he cave after a little while and return to it all? And would restarting his life make everything better? What if he gave up everything he now had, and then the new life he built for himself turned out to be worse?

He’d been having some very dark thoughts lately, and he wasn’t sure what that meant, or if he should even listen to them. Because when he was at his lowest, he didn’t want to start over, he wanted to end it all, and that was pretty scary all on its own. He’d never felt this way before. He needed the chance to work through his thoughts. Hopefully, he’d soon be able to figure it all out.

He eased his car down the driveway and waited until he was on the street before turning on the headlights. As he drove down the street, he couldn’t help but wonder if this was the beginning of a new chapter in his life, or the end of an era. He supposed only time would tell.

He just hoped something good would come of this.