The search for a legendary automobile threatens the careers and lives of husband-and-wife team Sam and Remi Fargo in this thrilling adventure in Clive Cussler's bestselling series.

In 1906, a groundbreaking Rolls-Royce prototype known as the Gray Ghost vanishes from the streets of Manchester, England, and it is only the lucky intervention of an American detective named Isaac Bell that prevents it from being lost forever. Not even he can save the good name of Jonathan Payton, however, the man wrongly blamed for the theft, and more than a hundred years later, it is his grandson who turns to Sam and Remi Fargo to help prove his grandfather's innocence.

But there is even more at stake than any of them know. For the car has vanished again, and in it is an object so rare that it has the capacity to change lives. Men with everything to gain and a great deal to lose have a desperate plan to find it--and if anybody gets in their way? They have a plan for that, too. 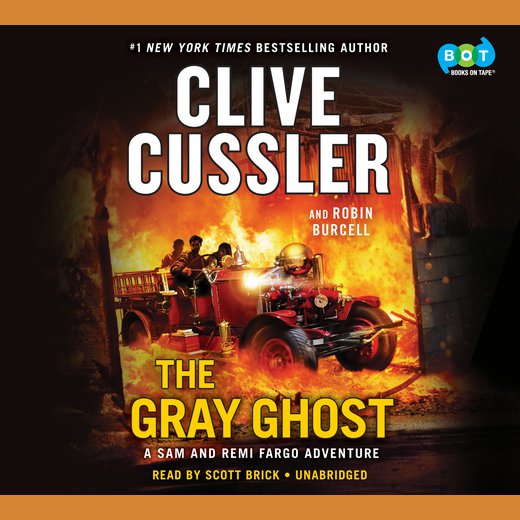 Just before sunrise, ten-year-old Toby Edwards and his nine-year-old brother, Chip, picked their way down the street, avoiding the low spots where the rain flowed down from the previous day’s storm. They stopped at the entrance to the alley. “Wait here,” Toby said, moving his brother into the shadow. “I’ll be back soon.”
“Why can’t I go? I’ll be quiet as a mouse.”
“Just wait. If anything happens, run back.”
The boy nodded and Toby moved off. The last time he’d stolen something from the bakery, he’d nearly gotten caught after stepping in a deep puddle. The water had soaked through his worn soles, his boots squeaking with every step he took. A customer was the one who’d heard, calling out to the baker that a thief had broken in, then chased after him.
He wasn’t about to make that mistake again.
Worried the baker might catch him again, he’d stayed away for several days, until hunger drove him out once more. This time, when he reached the back of the shop, he wiggled his toes, grateful that they seemed relatively dry. He glanced back, could just make out his brother in the dark. Satisfied he was waiting as he should, Toby moved in.
The waiting was the hardest part. He breathed in the scent of fresh-baked bread drifting into the alley. Every morning, the baker opened the back door a crack, just enough to let his grey tabby in and out. The door was locked tight, and Toby wondered if, after he’d nearly been caught, the man had realized it left him ripe for theft. Every minute that slipped by, Toby despaired. About to turn away, he heard the door open. The cat slipped out, its tiny paws silent on the wet cobblestones as it walked toward him, then rubbed its whiskered face against Toby’s patched trousers.
When the cat meowed loudly, Toby crouched beside it, petting the feline’s head, feeling it purr against his fingertips. “Hush, you,” he whispered, watching the door.
Finally, he heard the faint tinkle from the bell that hung on the shop’s front door, then the baker’s deep voice, greeting whoever it was that had walked in. Usually it was the servants in the big manor houses that ventured out this early, those who didn’t bake their own bread.
Toby edged over, listening before slipping into the door, immediately enveloped by the heat, wishing he could find a spot beneath the table to spend the night where he wouldn’t be seen. To be that warm while he slept…
Right now, food was more important. Suddenly he stopped, his heart sinking. The basket the baker had always left on the table with the burned and broken loaves wasn’t there.
The table was empty.
His gaze flew to the door that led to the front of the shop, just able to make out the perfect loaves stacked in baskets on the counter.
For a moment, he wondered how hard it would be to race out there, grab one, then keep running.
He could never do that. It was one thing to take what was going to be tossed out—quite another to brazenly steal something the baker made a living on.
Stomach rumbling, he backed from the room, his foot hitting a wooden crate near the door. He froze, grateful when no one came racing into the kitchen. When he turned to leave, he saw what was in the wooden crate. Nearly a dozen rolls, the tops a bit too brown, the bottoms black as coal.
Unable to believe his luck, he stuffed several rolls into his pockets, resisting the temptation to take every last one of them.
Slipping out the door, he raced down the alley, pausing to grab his brother’s arm. The two boys darted around the puddles then out to the street, where massive brick warehouses lined the railroad tracks. Toby and Chip lived in the orphanage on the other side. After a quick glance behind him to make sure no one was following, Toby guided his brother that direction. When they reached the corner, he saw a man astride a black mare, the horse champing at the bit. The horseman, struggling to keep his mount in control, glanced in their direction.
Toby grasped Chip’s hand, holding tight. Instinct told him to continue past as though that had been their intent the entire time.
As soon as they were out of sight, they broke into a run. Up ahead, Toby saw an alcove, and pulled his brother into it, hiding the boy behind him.
A few seconds later, he heard the staccato clip of the horse’s hooves on the cobblestones. Toby peered out, caught a glimpse of the man, and pressed back against the wall, praying the shadows would hide them.
“Who’s that?” Chip asked.
“Quiet.”
“I’m hungry,” Chip whispered. “And cold.”
There was a familiarity about the man when he’d looked over at Toby.
As though he’d seen him before.
And this was what bothered Toby. Something told him that if he didn’t find out who the man was, his brother and sisters wouldn’t be safe.
After their father, a coal miner, died of black lung, their mother had moved them all to Manchester, working at one of the textile mills. But then she’d taken ill and could no longer care for them. They’d lived the last year at the Payton Home for Orphans. Had it not been for Toby’s trips to the bakery, he and his siblings would have starved.
He had to get back to his sisters, but the only way to the orphanage was across the tracks. Seconds ticked by, and the low rumble of an approaching train grew louder. Suddenly the horseman turned and galloped back toward the tracks.
“Wait here,” Toby said, tucking his brother safely in the shadows.
###