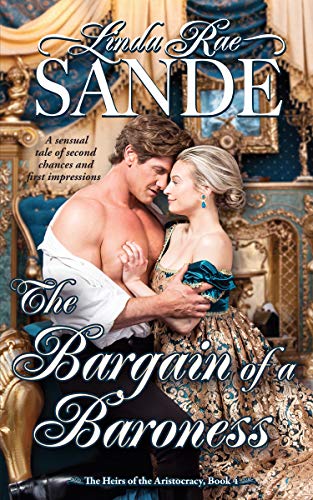 Separated by fate. Bound by a bargain. Is there any hope for a second chance love?

When his one true love marries another man, Graham Wellingham abandoned his hopes of romance to pour his attention into business. His hardened heart has left him immune to the charms of wealthy socialites... but he hasn't forgotten the promise he made to his love Hannah all those years ago.

Hannah Simpson Harrington has straddled two conflicting words her entire life. Once married to a future earl after her dream husband never proposed, his untimely death has left her a dowager with a too-mature-for-his-own-good sixteen-year-old son. But when she and Graham stumble upon a second chance for love, the possibility of a fairy-tale happy ending hovers just beyond their reach.

Meanwhile, a mysterious young woman captures the attention of Hannah's twin brother Henry. There's only one problem – a relationship between a housemaid and the grandson of a duke is forbidden. But Harry holds a glimmer of hope... and he's willing to take a scandalous risk for the sake of love.

Perfect for fans of riveting second-chance love stories with enchanting characters, a beautiful Victorian backdrop and plenty of passion, The Bargain of a Baroness is a romance tale you won't want to miss. Scroll up and grab your copy now!

Under a canopy of blue sky, Hannah Simpson lay on the freshly scythed lawn and stared up. The sun had long ago burned away the morning dew, but it hadn’t yet made it high enough to blind her as she watched the white clouds float overhead.

Hannah had a thought her mother would be cross if she knew she didn’t have a blanket beneath her. A maid would be forced to remove grass stains from her gown if she wasn’t careful. Her thoughts turned to more pleasant subjects, such as the elephant that had formed from a single cloud and was now chasing—very slowly—a turtle.

She recalled how the day before, Graham had, for the very first time in his eleven years, lifted her hand to his lips and kissed the back of it. He and his parents, Thomas and Emma Wellingham, had just arrived at Cherrywood, the Burroughs’ family country estate in Derbyshire, for a rare holiday away from town.

Hannah lifted that very hand so it hovered above her eyes, blocking out the golden ball of light that threatened to blind her.

Had Graham noticed how her hand had trembled in his? How her pulse quickened with his touch? How a pink blush colored her face and every bit of skin above the neckline of her sprigged muslin gown?

“It’s good to see you again, Miss Hannah,” he had said before he stepped back and bowed.

“And you. It’s been far too long,” she had responded, only a hint of a scold in her voice.

They both lived on the same street in London, after all, although Graham and his parents sometimes made the trip to their real home, Woodscastle, in Chiswick. The townhouse in King Street had been his mother’s before her marriage to Thomas Wellingham, and they used it when travel to Chiswick proved difficult.

“School,” Graham had replied, in answer to her scold. “When it’s done, I promise I shall see more of you.” All at once, his face had reddened, his eyes darting sideways as he realized what he had said.

Hannah had giggled at the thought of what he might be thinking. “If we’re to be married, then I expect that will be true,” she countered, hoping to assuage his embarrassment.

Hannah had often wondered what life with Graham Wellingham would be like when they did finally marry. Their parents had frequently spoken of a day when the two would wed. Talked as if a marriage had already been arranged in some formal sense.

The Wellinghams—Thomas and Emma—were good friends with her parents, Sophia and James Simpson. Emma had acted as midwife when Hannah was born. Hannah’s older twin brother, Henry, had been too impatient to await Emma’s arrival that fateful night when four babies had been born to three mothers.

Graham, nine months younger than those babes, had probably been conceived that night.

The sunlight that warmed Hannah’s face suddenly disappeared. “You look like an angel.”

Hannah blinked as she dropped her hand to her midriff. Although the one who interrupted her reverie was cast in shadow, she knew immediately it was Graham. She grinned. “You say that as if you’ve actually seen one,” she chided.

Graham lowered his gangly body to the grass and stretched out next to her. “Every time I see you,” he said with a wink. His gaze moved to take in the clouds above them, and he allowed a guffaw. “I thought you might be napping, but now I know you are deciding who will win the race.”

Hannah giggled. “The race?” she repeated.

“There’s an elephant chasing a turtle,” he said as he pointed to the clouds directly above them, “and a race horse, too.”

Continuing to giggle as she followed his finger, her eyes widened when she saw exactly what he described.

“So, are you betting on the turtle? Or the race horse?” he asked, his gaze turning to her.

Hannah allowed a brilliant smile as her hand once again shielded her eyes. “I don’t see a finish line.”

Hannah turned her head in the grass to regard him, sobering at his question. “I would bet on the turtle, of course. But why ever would you cast yourself as the turtle rather than the horse?” she asked in a whisper.

“Because a turtle will live far longer than the horse,” he replied, his hand reaching for hers.

Closing her eyes to concentrate on the warmth of her hand in his, Hannah grinned and allowed a long sigh. “Promise?”

Graham turned his head in the grass. “And if I do?”

Hannah’s eyes fluttered open, and she angled her head to regard him through blades of grass that had escaped the edge of the scythe. “Then I suppose I shall have to marry you,” she said with a prim grim.

Her brows furrowing at the seriousness in his expression, Hannah said, “Of course.”

“And if the horse wins the race?”

Hannah lifted herself onto an elbow and stared down at Graham. “Are you asking me to place a wager on this race?”

Graham inhaled as his gaze once again went skyward to see that the elephant was no longer, its shape pulled apart into a series of wispy clouds. Only the shapes of a horse and a turtle remained above them. “Only to agree to a bargain,” he finally replied.

Inhaling sharply, Hannah directed her attention to the clouds and allowed a sound of disappointment. “He’s gone,” she whispered.

“The turtle is still there,” Graham countered.

“As I suspect he always will be,” Hannah murmured. “I’ll make you a bargain, Graham Wellingham. No matter what happens—no matter who wins the race—I will be your wife one day,” she vowed.

Graham allowed a brilliant smile. “Quite a bargain, considering I have not yet proposed marriage,” he teased. An ‘oof’ escaped his lips when Hannah pounded a fist onto his midsection. “As if we have any say in the matter,” she said in complaint.

He inhaled slowly and lifted one of her hands to his lips. “We do, and we shall. Miss Hannah Simpson, I accept the terms of your bargain.”

Settling back onto the grass with a grin of victory, Hannah’s attention was once again captured by the clouds.

The horse had won this particular race, although his shape had shifted with the slight breeze, his legs breaking away into wisps and his head separating from his body. A moment later, there was no sign of the horse.

The turtle, however, continued its slow crawl across the sky.