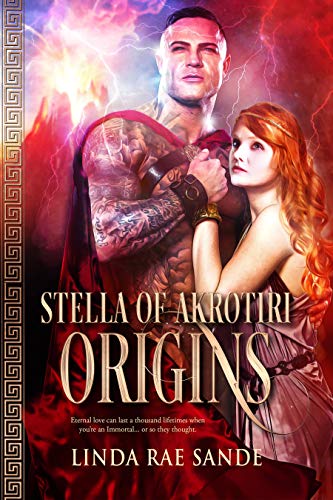 Immortality can be a lonely existence, especially when the world is about to implode.

For over six hundred years, Darius of Agremon has fought wars on behalf of those who needed his skills in combat. As a lechagos on Strongili, he spends his days commanding the Minoan coastguardsmen against pirates and marauders. His nights are spent alone, for despite having had wives in the past, he has watched them all grow old and die, childless, as he continues to live.

So when he senses immortality in an olive farmer's young daughter, Darius bargains to take her to wife when she is old enough to marry.

A foundling, Stella works in her adoptive father's orchard above Akrotiri, climbing the ancient trees to prune and to harvest the strings of pearls from their branches. She fears invaders when she watches flaming arrows arc in the sky, a sign the island is under attack. She worries about how the ground quakes beneath her feet and steam erupts from cracks in the ground. She wonders at the odd tingling she experiences whenever Darius of Agremon is near, a sensation not unlike the one she feels when spending time in the oldest trees.

Unaware of the arrangement her father has made with the lechagos, Stella thinks she has been sold into slavery when Darius comes for her. Her youth has been spent admiring the man who helped her father's business thrive. Now she has only contempt for him and his hard-headed manner, despite the pleasures he incites whenever he claims her body.

While the earth trembles and a volcano threatens to destroy the island of Strongili, these two will have to forge a relationship that will last far longer than a lifetime—one that must endure an eternity and the disaster that's about to wipe out the only home Stella has ever known.

A Night on the Beach

A beach near Akrotiri on the island of Strongili, in the center of the Minoan civilization

The flames of a small fire danced about in the late evening breeze as Darius of Agremon sat on the red sands of a beach. Tired, but not weary enough to give in to sleep, he contemplated his latest trip to Creta.

His only reason for making the seventy milion crossing was to meet with the king. He did so on a regular basis, always during every other new moon, always at the palace at Knossos, and never for very long. There was wasn’t much to tell King Cydon. They rarely spoke of anything other than the security of the islands under the king’s control. The need to prevent pirates and marauders from either landing on the islands or disrupting important shipments from reaching the center of the Minoan trading juggernaut.

As Strongili’s lochagos, Darius would apprise Cydon of any current threats to the island and to Creta. Request more watchtowers and the coastguardsmen to man them.

Then Darius would find passage on a northbound ship, ready to spend the return trip sleeping so he could resume his command of Strongili’s coastguard when the ship docked in the morning.

Today’s crossing was made on a ship heavy with cargo.  Possessed of a huge crew featuring muscled oarsmen, the ship set a new record for speed when it made it into the port near Akrotiri by sundown.

So much for having arranged a cabin in which to spend the night.

Had they arrived at dawn the following day as expected, Darius would have made his way on horseback to the tent he kept on one of the mountains in the southern half of the island. Spent the rest of the day there, and then made the trip to a small oikos he owned on the north end of the island the following day. But with the sun having set and no desire to travel in the dark, he decided to spend the night in Akrotiri.

Not wanting to impose on either of the coastguardsmen he knew who lived there—both had wives and families—Darius instead arranged for a bed and an early supper at an inn near the port. Unable to sleep, he had ventured onto the red beach and discovered the still-hot embers of an abandoned fire. A bit of kindling and dried driftwood brought the fire back to life.

His thoughts strayed to his meeting with Cydon. At first, he wasn’t sure why his earlier conversation with the reigning King of Minoa had him so bothered.

Although King Cydon had praised Darius time and again for his skills as lochagos, his other comments as to his personal life had stung in a way Darius couldn’t seem to shake.

You are a man in need of a reason to go home at night.

Didn’t the security of the island take precedence over the condition of his living quarters?

You will need to find a wife.

The thought of taking another mortal to wife bothered Darius. Was it fair to wed a woman who could never bear his child? After three wives, he knew he could not father a babe.

The dying fire briefly flared back to life just then, pulling Darius from his reverie. At the same moment, a slight tingle at the edge of his consciousness should have had him on alert. Had him reaching for a weapon and preparing a fight to the death. But something about the sensation seemed more friend than foe. More relaxed than dangerous. More welcome than not.

Angling his head to glance up at the high ground overlooking the red beach, he couldn’t make out anything—or anyone—watching from above. But the musical sound of a young girl’s giggle, barely heard over the wind, had him grinning.

Leave it to the young to find humor in my quandary.

A few minutes later, Darius of Agremon made his way back to the inn and slept harder than he had in years.